Have you been waiting for Google Maps to come back to the App Store before you update to iOS 6? Given the incredibly harsh media attention that Apple Maps has received since iOS 6 went live back in September, you’d think that there would be a significant number of users holding out for Google Maps to make its triumphant return.

Since the release of Google Maps a few days ago, there hasn’t been a noticeable spike in iOS 6’s adoption rate. In fact, it’s had no real impact on users updating to iOS 6 at all. Was the ‘Mapplegate‘ fiasco really that exaggerated?

Chitika monitors web traffic from ad impressions on its network to determine how many users are active on a given platform. iOS 6 saw aggressive growth until adoption started plateauing between 60-70% in October. Mainstream media has been grilling Apple’s new Maps in iOS 6 for months, and many that rely on the app have been concerned about getting bad directions, and with good reason. Some drivers in Australia were recently led astray into the wilderness by Maps. 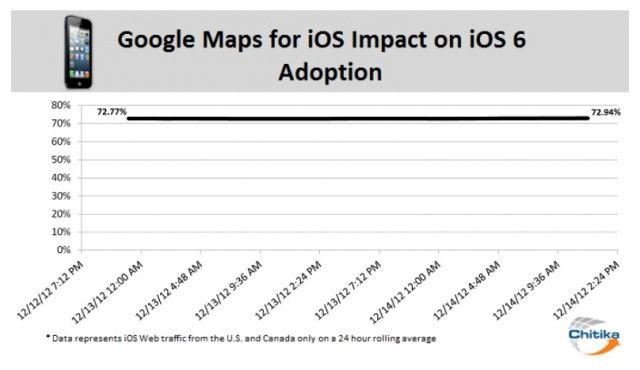 Have people been holding onto iOS 5 and the Google Maps app of old? According to Chitika, iOS 6 rose from a healthy 72.77% to only 72.94% the day after Google Maps for iPhone was released in the App Store. As you can tell by the chart, there was no spike in users at all. Google Maps was a barely a blip on iOS 6’s radar, and that’s even when the app shot to the top of the App Store’s charts in a matter of hours.

It’s important to note that rumors have been predicting a new Google Maps iOS app before the end of the year, so perhaps there were concerned users that updated to iOS 6 with the expectation that they would be getting their Google Maps fix soon.

What this really looks like is a classic case of an Apple problem being blown out of proportion. Apple Maps isn’t that bad, and even if it is in some cases, people have been willing to stomach it for months.

If you still find Apple Maps to be unusable in your area, try Google Maps or one of the other third-party mapping solutions Apple highlights in the App Store.