Google released an official Google Maps app for the iPhone on Wednesday evening — I’m sure you’ve already downloaded it to your device — and as you might expect, it’s already incredibly popular. Users have since been rushing to reclaim the mapping service that Apple booted out of iOS with its latest iOS 6 update, helping Google Maps rocket to the top of the App Store’s free chart in just seven hours. It has knocked Apple’s own 12 Days of Christmas app down to second place.

The app hasn’t just been popular, but it’s been receiving a lot of good reviews, too. At the time of writing this piece, it has a 5-star rating from more than 8,400 ratings, while David Pogue of The New York Times calls it “an astonishingly powerful, accurate, beautiful tool.” 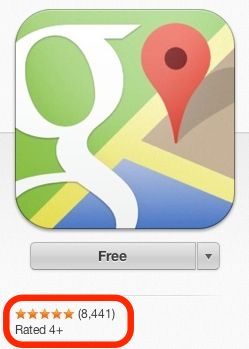 Not only does Google Maps bring back some of the features we lost with iOS 6 — such as Street View and transit directions — it also introduces some new ones, including Google’s own voice-guided turn-by-turn navigation service, and live traffic information. It doesn’t quite have all the features boasted by its Android counterpart, but Google has admitted that it is a better app.

If you haven’t downloaded Google Maps yet and you rely on your iPhone to get you around, you can find the free app in the App Store now. But before you do that, be sure to check out Cult of Mac’s review.