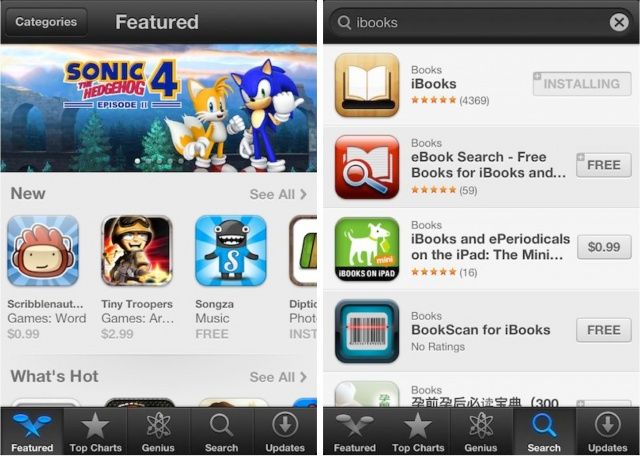 So much of iOS 6 is about making soft refinements to existing apps, and nothing exemplifies this approach more than what Apple has done to the App Store. There’s nothing revolutionary here. It works mostly the same. But it’s undeniably more pleasant and less frustrating to use.

The most immediate change in both apps is that they have been given darker, low contrast designs. It’s a small decision, but it makes it easier on the eyes, and therefore, easier to stay in Apple’s virtual stores and keep spending money. That, in fact, seems to be the modus operandi of the update. Apple wants you to stay in the App Store and spend more money.

With 700,000 apps and growing, app discovery in the App Store is a very real problem for Apple. That’s why Cupertino bought Chomp last year, and the result seems to be a smarter, easier-to-navigate App Store, with rotating banners for featured apps, easier-to-read app product pages, the ability to see related apps at a glance, and more.

The most welcome change in the App Store, though, is this: Apple has finally eliminated a lot of the senseless bullshit of buying an app or updating one. Before, if you updated your apps, you needed to enter your iTunes password for no apparent reason. Now you don’t. Before, if you bought a new app, you were taken out of the App Store to your iPhone homescreen. Now you’re not.

Finally, there’s search. This is where Chomp’s heritage is most clear: if you search for an app, you now get more than a list of app names, prices and app icons, but are instead presented with an attractive carousel (complete with app screenshots) that you can scroll through to find the app you want.

Apple makes 30 cents off every dollar spent in the App Store, so they want you spending as much time in the app as possible, and make it as easy for you to find what you’re looking for as they can. iOS 6’s App Store update goes a long way towards doing just that. It’s a step up in every way.

Apple has finally eliminated a lot of the senseless nonsense of buying an app or updating one. 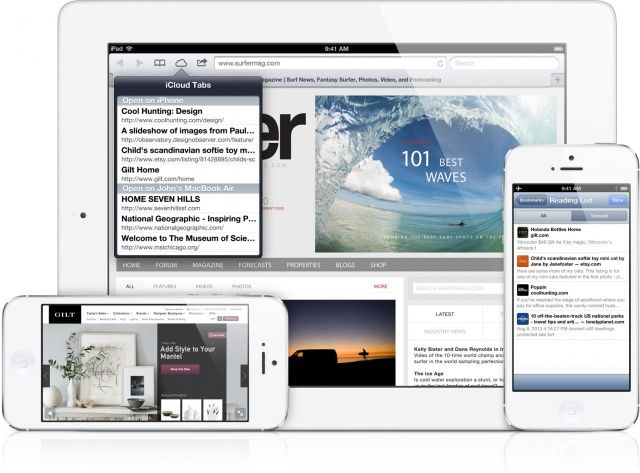 With the release of Google Chrome on iOS, Safari’s suffered a major broadside from third-party browsers: it’s just as good of a browser when it comes to features except for one thing, which is access to the “Nitro” Javascript engine that makes Safari feel so much faster, and which Apple keeps in reserve for Safari alone. Until Apple allows third-party browsers to take advantage of Nitro and be set as iOS’s default browser, Safari is going to be the best and most practical choice for most users looking to hit the web. Which is what makes Safari in iOS 6 such a disappointment: there’s little new that matters here, even as browsers like Chrome push the bar while working under Apple’s artificial Javascript disadvantage.

Feature-wise, iCloud Tabs is the big improvement this year. Similar to Chrome’s sessions view, iCloud Tabs allows you to easily open any web pages you have open in any other instance of Safari, whether on the iPhone, iPad or Mac. It works as advertised, and it’s very useful for juggling your webpages across devices, as long as you use Safari everywhere. Chances are you don’t.

Other than iCloud Tabs, though, Safari’s new features are pretty paltry. Reading List now supports offline content, which is helpful for when you don’t have a data connection, and makes the feature a more viable alternative to scrapers like Instapaper and Pocket. There’s also a full-screen mode, which works well enough if that’s your bag, and can be useful on the iPhone especially to see as much of a webpage as possible on the tiny screen.

Safari’s a great browser, but it’s frustrating not seeing it evolve very much this year. There’s real competition on the horizon from the likes of Google Chrome. It’s strange that Mobile Safari isn’t even seeing some of the changes Apple has made in Safari for Mac this year: for example, unlike the desktop version, Safari in iOS 6 still has a superfluous search bar, which is mind-boggling considering how much space it wastes on a tiny screen. We hope for either bigger improvements in iOS 7, or for Apple to finally allow third-party browsers to be set as default.

Safari in iOS 6 is a bit of disappointment: there’s little new that matters here, even as browsers like Chrome push the bar. 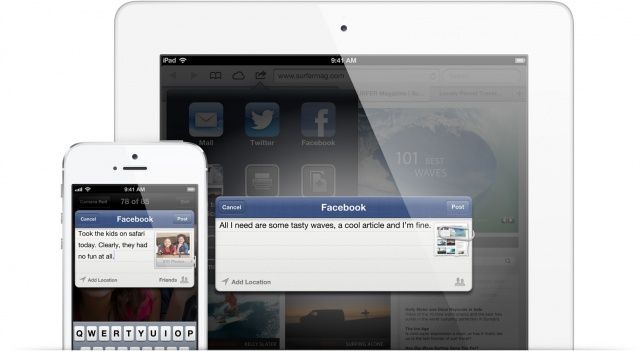 Sharing is one of the major foci of iOS 6, and so Apple’s mobile operating system has received a host of new features and functionality all centered around giving you more options for sending the content you have on your iPhone or iPad to other people and other apps.

iOS 6’s focus on sharing is obvious the second you click the “Share” button in any app. Where before you got a text-only list of apps and other places you could share a file or webpage, you are now presented with an attractive grid of icons with the same information. Functionally, it doesn’t change much, but it seems much less slapdash and much easier to share, say, a photo or a web page at a glance.

Last year, Apple made Twitter a default sharing option in iOS; this year, Facebook’s getting the same treatment. It works exactly the same as Twitter did in iOS 5: as long as you have the Facebook app installed, you can set up your account in Settings, and then share things like photos and web pages using a pop-up notecard where you can enter your location and a custom message. It works just fine, and you can even post to Facebook by tapping the Facebook button in Notification Center, just like you can with Twitter.

There’s more to Facebook integration than just sharing, though. One big addition is that Facebook in iOS 6 has access to your Calendar and Contacts. That means it can automatically add Facebook events to your Calendar, or change your contacts’ photos, user names, birthdays and job titles as appropriate. Whether you should trust Facebook to muck around with your Contacts probably has more to do with how much you trust your Facebook friends to keep their information on the social network up-to-date, but for my gaggle of contacts, it worked out well, and never did anything stupid like replace a functional phone number or email with one from Facebook that didn’t work. 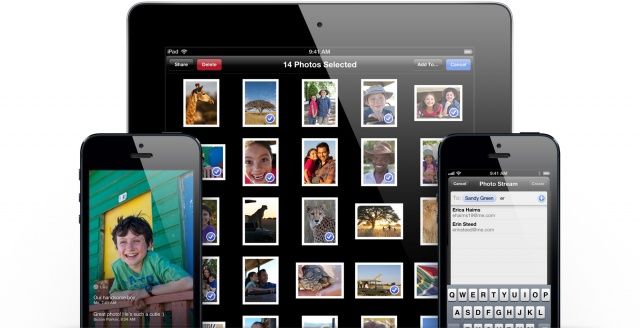 As our devices become ever smaller, ever more advanced, ever more connected, it can be harder and harder to put them down. That’s as it should be, but being connected all the time isn’t always a good thing. Managing what’s going on in your connected life can be stressful, especially when your attention is being demanded by your device at inopportune times.

“Do Not Disturb” is Apple’s effort to help you deal with that stress, and it might just be my favorite feature of iOS 6. At any point, by going to Settings, you can flip a toggle that will turn off all incoming notifications and pipe all your calls to voice mail.

You can always tell when Do Not Disturb is on, because a sleepy little moon will show up in the status bar until you turn it off again. It’s a fantastic way to get a breather from the crush of your digital life, with some smart options that make sure that people can still reach you in an emergency. You can select individuals who can always bypass Do Not Disturb if they call you, and if someone tries to call you twice within three minutes, the call will go through, assuming it is an emergency (this is adjustable in the Settings).

The best aspect of Do Not Disturb, though, is it can be automated. You can easily set it, for example, to automatically go into Do Not Disturb mode from midnight until 7AM, making sure you’re not interrupted all night long by the incessant pinging of incoming notifications.

The biggest fault of Do Not Disturb is that it’s such a useful option, it seems silly to bury it in the Settings panel. This is a feature, like Bluetooth, that should come with a Notification Center toggle. Fingers crossed for iOS 6.

Do Not Disturb is a fantastic way to get a breather from the crush of your digital life.

• Apple may have failed in doubling-down on secrecy with the iPhone 5, but iOS 6 doubles down on privacy, requiring all apps to ask your explicit permission the first time you run them to access photos, your location, your contacts, and more. It’s a good change that makes what apps can and can’t access on your device a lot more transparent, without adding a lot of fiddly management.

• Wi-Fi Plus Cellular — which allows you to seamlessly switch between 3G/LTE and Wi-Fi, depending which is faster — is a great feature if you’ve got a terrible home internet connection, but be careful: mobile data is expensive, and just a few days with this setting on saw our mobule data usage go through the roof.

• Bluetooth is now toggled on the first screen of the Settings app. It’s an improvement, but this really needs to be a feature that you can adjust either in Notification Center or in the task manager. It’s just too important to be so far away.

• Messages now unifies all of your email address and phone numbers, so that you get incoming iMessages on all your devices. It’s a big improvement, mostly because you can now send a Message to someone’s phone number, and it’ll pop up on their Mac if they are using Messages on Mountain Lion. That didn’t happen before, and it was maddening. It also means that all of your possible iMessage addresses are now automatically synced using the iCloud between devices, which makes setting up a new device for Messages a lot less tedious.

• The new Clock app on the iPad is absolutely gorgeous. Now if only the iPad would get the other “missing” apps. How does the iPad still not have Weather?

• The “New” badge on apps you have recently downloaded but not opened yet is kind of ugly.

• You can now stream your music collection using iTunes Match instead of downloading it locally. That’s the way it should have worked in the first place.

• Making Panoramas with the iPhone 4S camera is super fun and easy. Here’s one I made of my study.

iOS is already the fastest, most advanced and most mature mobile operating system out there, and iOS 6 introduces enough improvements to keep it more than a nose ahead of the competition. But the transition from iOS 5 to iOS 6 seems like the least urgent update to the Apple’s most popular operating system to date. There are some standout new features, like turn-by-turn navigation and Do Not Disturb and changes to Siri, but the bulk of iOS 6 is made up of either small incremental improvements to existing apps or entirely new apps like Passbook or the new Maps which are promising starts, but curiously unfleshed-out right now.

Is iOS 6 bad? Hardly: it’s the best version of the best operating system out there. iOS 6 is superior in every way to what came before it, and lays important groundwork for the future. We just can’t wait to see what revolutions Apple has in store with iOS 7.

iOS 6 is superior in every way to what came before it, and lays important groundwork for the future.