If you’re a T-Mobile customer who was hoping that the iPhone 5 would be the first iPhone to gain official support for your carrier, then look away now. A leaked T-Mobile memo reveals the company is instructing its staff to sell “against the iPhone” from September 21, and it looks like they’ll be trained to help customers choose alternative smartphones instead.

With the iPhone 5 expected to launch around a week after its September 12 unveiling, T-Mobile’s memo suggests the carrier won’t be getting Apple’s latest handset. Although that’s not explicitly clear in this memo, we can’t think of any reason why T-Mobile would tell its staff to “sell against” a device it will be stocking.

It wouldn’t be a surprise if T-Mobile didn’t get the new iPhone, either, given the fact that it hasn’t managed to secure the previous five.

But not only will the carrier not be selling it, but it will be actively selling “against” it, according to its latest internal memo. It’s currently unclear exactly what that means, but presumably the carrier will be training its staff to help customers choose other smartphones instead. T-Mobile’s memo notes that all staff must have completed this training by October 5.

What’s interesting, however, is a second memo regarding “Monthly4G Micro SIM Kits” for the iPhone 4 and iPhone 4S, which explains that retail stores will soon begin receiving micro-SIM kits aimed at customers with unlocked iPhones who want to take their device to T-Mobile. 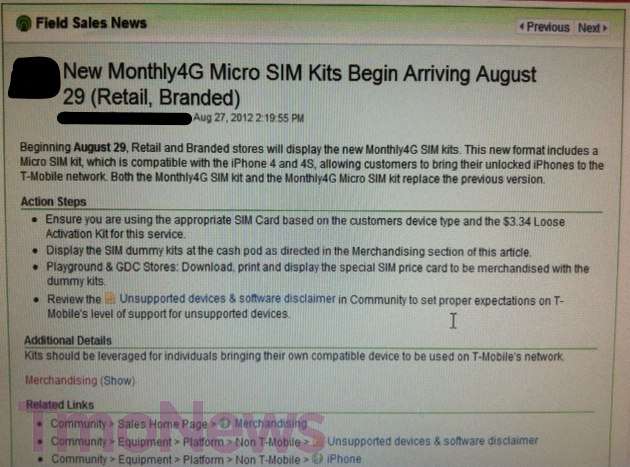 T-Mobile would rather you bought an Android handset than an iPhone, then, but if you already own Apple’s device, it will happily make you a customer.