David Beckham is one of the greatest soccer players of all-time. I think. To be honest I’m not really sure, because I’m American and we don’t really watch “futbol” all that often, but I hear he’s great and I know he’s famous, so he’s gotta be good, right?

Not only is the dude super famous, he’s also super duper hot. Like, David Beckham is so stinking sexually attractive that silver statues of him in his glorious underwear are erected in his honor. And one just so happens to be outside the Apple Store on 5th Ave in NYC for some reason.

Here’s what the statue looks like from the front: 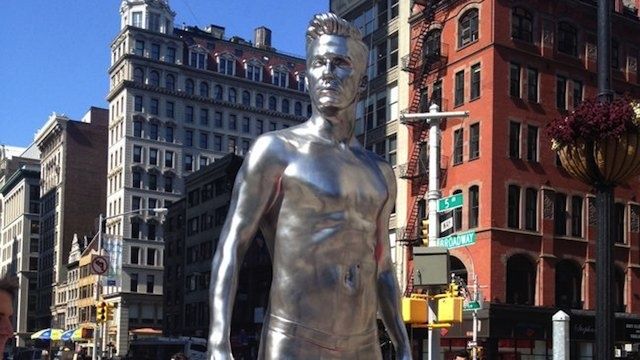 My goodness! Just look at that splendid, shimmering face. And…well you get the point. It turns out that the David Beckham statue infront of the 5th Ave Apple Store is part of a marketing campaign by H&M. People can go up to the statue, take a picture and instagram it with the hashtag #hmbeckham, and maybe win a $1,000 H&M shopping spree, or some underpants signed by Becks himself.

The statue will be up till Sunday, so if you want to get a picture of you and the most amazing soccer player of all-time doing something a lil’ naughty, you better hurry to the Apple Store.