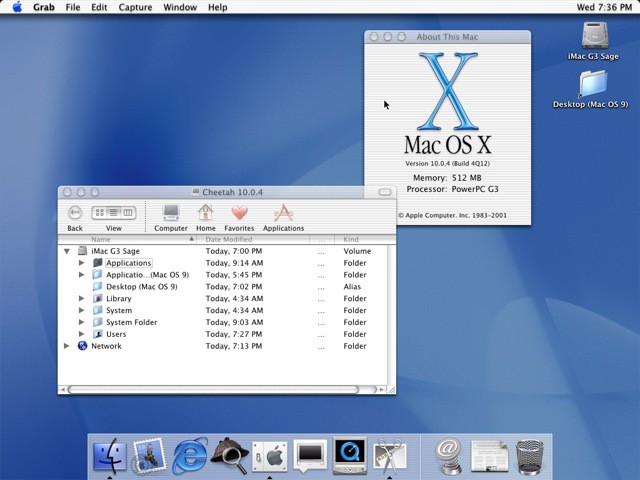 After several abortive attempts, a succession of CEOs and the acquisition of NeXT, Apple finally shipped their next generation operating system in April of 2001. Codenamed “Cheetah”, Mac OS X 10.0 was more a proof of concept than a useable OS, but it put a Macintosh GUI on top of UNIX and told the world that Apple was serious about moving ahead. The 10.1 “Puma” release brought needed stability and more complete capabilities like CD recording and DVD playback, and was provided as a free upgrade.

Aqua was the lickable new visual theme for the system, with blue scrollbars, squishy buttons and a new gadget called The Dock. Mac OS 9 ran as Classic Mode, which was necessary since little native OS X software was available at this time. Internet Explorer was the web browser, Sherlock handled Find, and iTunes and iMovie were carried over from OS 9. The Chess application which debuted with Cheetah has changed little in ten years!

10.1 was also the last Mac OS release which used the Happy Mac face on startup; the more serious but less fun Apple icon with the spinning gear debuted in Jaguar. 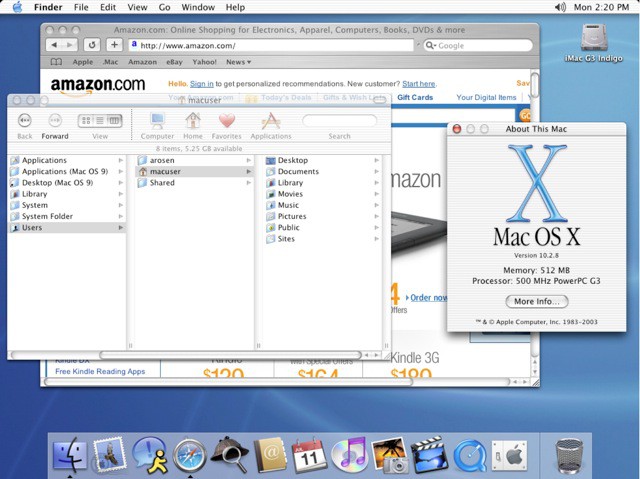 Jaguar was the first truly popular Mac OS X release, and most longtime Mac users made the jump to OS X with this version. 10.2 was the default boot choice on new Macs, and was the first to publicly use the development code name for marketing – the name “Jaguar” leaked out before launch, and people liked it, so Apple capitalized on the term. Big cats have been with us since.

Jaguar offered notable performance improvements, better printing options, and introduced Quartz Extreme graphics. Rendezvous appears with this release, a TCP/IP equivalent of AppleTalk. The iLife suite and Digital Hub concepts made their debut as this time, the iPhoto icon was added to dock and the iTunes icon changed to purple.

Safari, Apple’s new web browser, was introduced as an alternative if Microsoft discontinued Internet Explorer for Macintosh; shortly after release, Microsoft killed Explorer for Mac. The look and feel of the OS also started to evolve at this time, with Apple utilizing a mixed use of Aqua’s striped transparency and iTunes’ Brushed Aluminum themes. 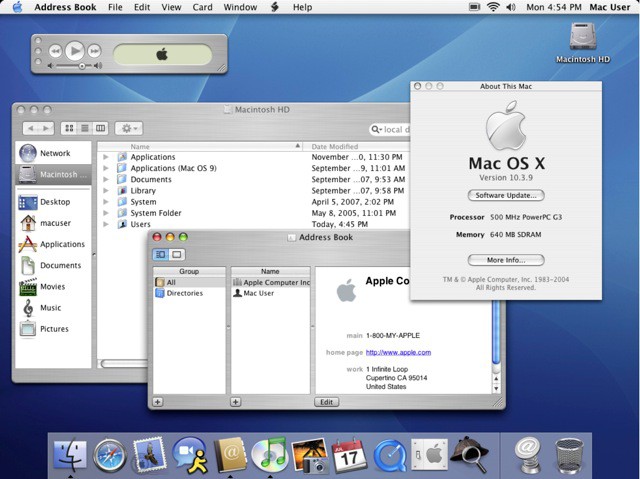 Panther was perhaps the first OS X release which truly began to feel faster than Mac OS 9. The OS was very snappy and useable, and most early filesharing and networking issues were finally resolved. The sidebar appeared in the Finder to assist with disk navigation, and the original Aqua look and feel began to wane. Brushed Aluminum would dominate for years to come, both onscreen and with Apple’s products themselves.

Fast User Switching was implemented in Panther, along with Exposé shortcuts and Filevault disk encryption. Rendezvous was renamed as Bonjour (some kind of rights issue), iTunes went green and the iTunes Music Store was born. iChat AV also appeared at this time, perhaps foreshadowing Apple’s move into more advanced communications technologies like the iPhone and FaceTime. But no one was (publicly) thinking that way at the time.

Next: Tiger to Snow Leopard