New iMacs are coming pretty soon, with Ivy Bridge processors that will make them faster than a jack rabbit hyped up on Mountain Dew. Apple is expected to release the new iMacs sometime this summer, but it looks like benchmarks for the new machines have already been revealed, giving us a glimpse at just how speedy Apple’s new all-in-one PCs will be.

A post from May 10th 2012 on GeekBench, showed an entry for a new iMac13,2 which may correspond to the new 27-inch iMac models that will run a quad-core Ivy Bridge processor i7-3770 running at 3.4GHz. This would put this iMac at the higher-end spectrum. Overall, the new iMac received a score of 12,182 which is a bit higher than the 11,500 score of the current high-spec iMac models (higher is better).

GeekBench scores were also recently revealed for the new MacBook Pros. The new iMac13,1 has a motherboard identifier that dates back to OS X Mountain Lion developer preview from February. MacRumors notes that the four-digit suffix on the build number is unusual for OS X, but special builds with similar patterns have been seen in the past.

There have been a few times in the past that we’ve seen system scores leaked into Geekbench’s database before a product’s announcement. It’s very possible that these scores represent a genuine machine for a near launch product. 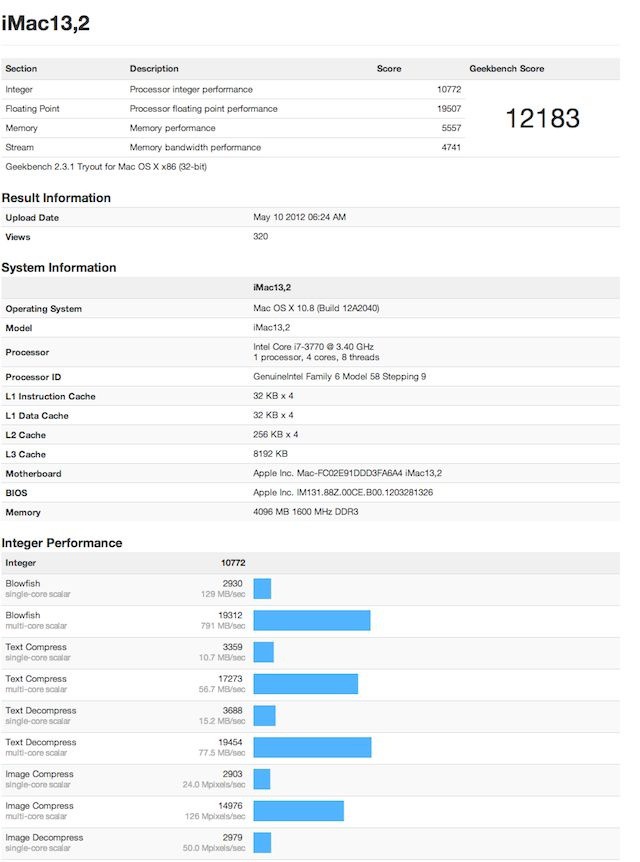