Apple is expected to refresh its MacBook Pro lineup this summer, and rumors have widely agreed upon a May-June announcement timeframe. The upcoming notebooks are expected to feature Intel’s new Ivy Bridge processors and possibly sport higher-res, Retina-like displays.

Benchmarks have been revealed for what could very well be one of Apple’s upcoming MacBook Pro models.  The mysterious computer runs an unknown build of OS X Mountain Lion and features one of Intel’s high-end quad-core Ivy Bridge processors. 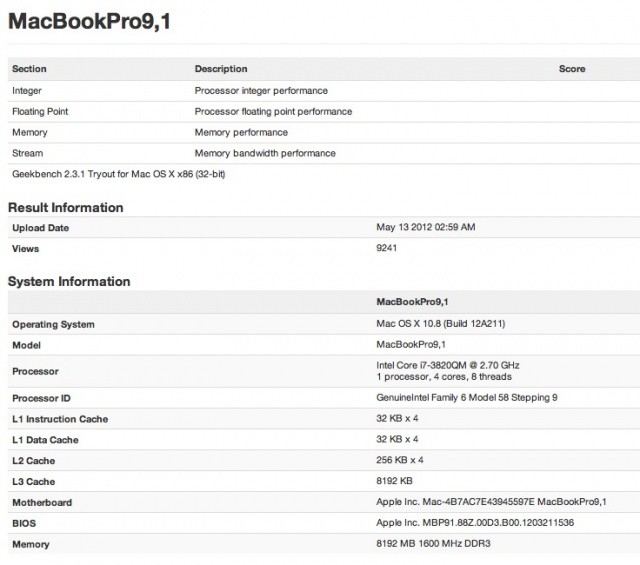 MacRumors forum member “AppleTree” spotted the Geekbench post first, and the finding has caused some excitement in the forum thread. While it’s possible that the Geekbench data could have been potentially tweaked by a rambunctious Mac enthusiast, Geekbench has correctly predicted new Macs before. The 2010 MacBook Pro Core i7 specs were leaked on Geekbench two months before Apple’s actual release.

The purported 13-inch MacBookPro9,1 is running an Intel Core i7-3820QM clocked at 2.70 GHz and 8GB of RAM. Intel launched the 3820QM, a high-end Ivy Bridge notebook processor, on April 29th. The processor’s integrated graphics mark a nearly 50% improvement over the Sandy Bridge architecture that’s used in the current MacBook Pro.

Apple calls the MacBook Air “the future of notebooks,” so its safe to assume that the company’s notebook strategy ultimately points towards the Air. How that specifically pans out for this year’s MacBook Pro remains unknown. Apple has always differentiated the 13-inch MacBook Pro with a dual-core processor while offering quad-core in the 15-inch and 17-inch models. The company could theoretically offer quad-core across the board for the MacBook Pro lineup this year and stick to dual-core for the MacBook Air.

We’ve heard that Apple is focusing on the smaller end of the MacBook Pro lineup for its 2012 refresh in June, and that the company isn’t even sure it will do a new 17-inch model. Also, no optical drive.

And in case you were wondering, Ivy Bridge iMac benchmarks have also surfaced.