One of my favorite jailbreak tweaks for the iPhone 4S (before I updated to iOS 5.1 and lost my jailbreak) was called Lingual, which enabled Siri to connect to Microsoft’s Bing Translate API and immediately translate words or phrases into a number of different languages.

Thanks to iTranslate Voice, you can now get the same functionality and more for any iPhone from the App Store. This excellent $0.99 app listens to you speak, then quickly translates your sentences into one of 31 languages. It’s super quick and incredibly accurate.

I’ve been playing around with iTranslate Voice for most of the morning, translating simple words and phrases and putting it to the test. And honestly, I could not be more impressed with this app.

For less than a dollar, it will translate phrases into one of 31 languages and dialects. Simply tap the microphone, tell iTranslate what you’d like to translate, and let it perform its magic. If you’re in public and you’d rather not be seen talking to your iPhone, you can also enter words and phrases manually.

The process is extremely fast, with almost no wait time whatsoever. And once you have your translation, you can share it via email, text message, or tweet. 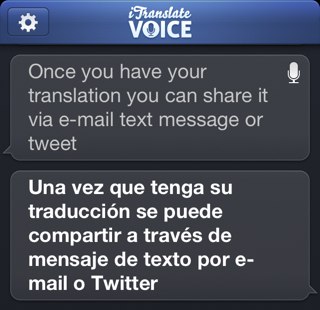 iTranslate Voice doesn’t just do translation, either: You can also look up definitions and meanings to words and phrases using only your voice.

iTranslate Voice is on sale for $0.99 for a limited time only, so be sure to grab it while it’s cheap. If you’re learning a foreign language or visiting a foreign country, this app will be hugely worthwhile.