Sure, the 32GB iPad has enough storage space for a bunch of apps, some songs and maybe even a movie or two. But for those of us with large media collections, even the mega 64GB version will start to feel a little cramped when stuffed full of music and videos (and I have no idea how those of you with 16GB iPads get by).

So, what if you could just stick a portable external drive into your iPad, like you would with a MacBook? Bam, extra storage! Well, yeah — but you can’t, right? Wrong! Well, sorta — you can’t plug one in physically; but the 500GB Seagate GoFlex Satellite ($200) gets around the whole physical connection thing by supplying its own wifi hotspot that lets you create a wifi link between it and your iPad. Genius.

Loading stuff onto the drive is pretty simple. The Satellite is basically a standard GoFlex drive with a slapped-on wifi module, so it also functions like any other portable external drive. I simply plugged it into a USB port on my MBP with the supplied USB 3.0 interface and it showed up on finder’s sidebar, just like any other drive. Then I loaded it up with movies, music and photos, disconnected it (an interesting note: The Satellite’s wifi radio won’t work if it’s connected physically). After that, I just downloaded the free GoFlex Media app and I was good to go (well, almost — see below about file formats).

Unlike cloud-based streaming options, the GoFlex doesn’t require you to have an internet connection. This makes it a great choice for frequent flyers or commuters — or for kids in the back seat on a long drive — who want to use the iPad to watch movies. For the most part, the movies played as if they were on my iPad, and I didn’t notice that the movies were streaming from the little drive. The only hiccups came when the drive was some distance from the iPad — like, say, in the next room.

Because it’s part of Seagate’s unique GoFlex system, the drive works just like another GoFlex drive; this means that not only can it swap interfaces as needed (which makes it easily upgradeable when Seagate finally comes out with a GoFlex Thunderbolt interface), but it’s also compatible with other devices in the GoFlex line, like Seagate’s FreeAgent GoFlex TV.

Though it didn’t come with the ability when originally introduced, Seagate released a firmware update a few months ago that allows the Satellite to now also stream music — a welcome addition for those with big music libraries, and a sign that Seagate is listening to user feedback.

The drive’s battery is rated for about five hours, and we found that about right during testing. The Satellite also comes with a USB power adapter, and the cutest, tiniest USB car charger we’ve ever seen, to keep it juiced while on the road.

The biggest trade-off to using the Satellite is that, because it required me choose it as a network, I was cut off from web access once hooked in to the drive — no Internet access, not even through 3G. And it’s not like, say, switching over briefly and easily for a quick email check while streaming Netflix; no, when using the Satellite, it requires going into Settings, decoupling from the drive, getting back onto a wifi hotspot (or 3G), finishing up and then getting back into the Satellite. Kind of a pain.

Another bummer is how picky the Satellite app is about what video file formats it plays. In fact, very little of my movie collection would play on the drive. Luckily, this is an easy workaround: you can either transcode videos into a format the iPad finds palatable using something like Handbrake; or you can use a third-party app like OPlayer HD (Lite version here), which plays all kinds of video file formats that are otherwise unplayable on the iPad (I preferred the latter approach, because it meant I didn’t have to have two different files — one for the iPad, one for playing on the big screen — of the same movie).

The GoFlex app that’s designed to be used with the Satellite is easy enough to navigate with; but its lack of ability to play many file types hampers its usefulness (Seagate says this is the iPad’s fault — but if apps like OPlayer can play wayward file types, there’s no reason why this app shouldn’t).

Even though It’s not perfect, the GoFlex Satellite is a great way to get around the iPad’s storage limitations, especially for movieholics, or those with kids and/or long commutes. 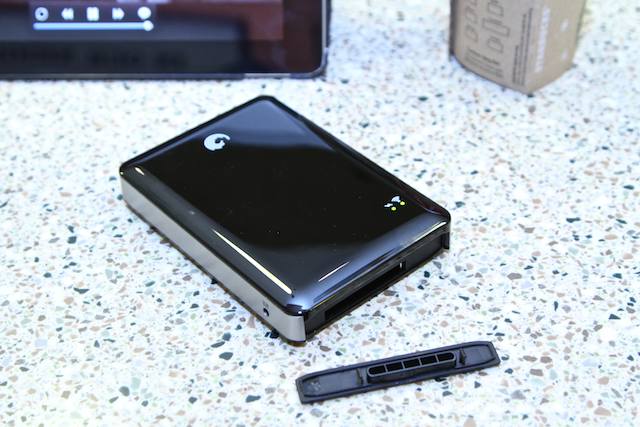