Almost all mic-equipped canalphones that can be had for about $100 use moving-coil drivers to produce sound, as is the case with all the previous IEMs in this review series. But the Ultimate Ears 600vi ($120) are different — this set employs a single tiny armature in each ear. Armatures generally allow for a more neutral sound with better definition than their moving-coil brethren, and that’s exactly the case with the 600vi. In fact, this set uses pretty much the same excellent drivers as in the now-discontinued, $180 SuperFi 5vi we reviewed early last year.

And yes, apart from the V-Moda Vibrato, the 600vi is $20 more than the other earphones in this review series — but we think the extra Jackson is worth it.

As I mentioned, there’s one overriding reason you’ll want a pair of these guys: They sound terrific. In fact, they’re the best-sounding earphones of the sets in this review series. Those armatures really do produce a different sound, with two big differences between this set and others in its range.

The first is in how neutral music reproduced through the set sounds. The entire spectrum is represented evenly and faithfully, with a slight bias toward bass. Every frequency sounds even and exactly where it should be, and music can be more easily tuned to taste with equalizer settings from this point; there’s also a unusually delightful, bright emphasis to the midrange and vocals, accomplished without drowning out bass or highs. The other immediately noticeable characteristic is how well-defined the different instruments sound — there’s no fuzziness, and you can pick out each instrument in its own space. Just bear in mind that this isn’t a set for iehard bassophiles; bass is there, but unlike the S4i, it’s offered up at measured, restrained levels.

Seal is even more critical with armatures than with moving-coil drivers, and Ultimate Ears has accordinlgy furnished the 600vi with six different sets of eartips: five sets of differently sized silicone tips and a set of Comply foam tips, with a spare set of the latter as the foam tips wear fairly quickly. My favorite are the Comply — they’re comfy, and expand in the ear canal to form a good seal; they’re not as good at sealing or keeping out noise as Etymotic’s foam tips, but they’re more comfortable.

Like the Klipsch Image S4i, the 600vi can be worn either with cables hanging down, or looped around the back of the ear; either is comfy, and wearing them in the latter method worked exceptionally well — although as with the S4i, the housing is a little funky and wasn’t as comfy to wear with the cables hanging straight down (although they didn’t jut out as much as the S4i). The silver accents on the earpieces may or may not be to your liking, but the styling and finish in general is fairly clean.

While the controls and mic housing felt solidly constructed and was located logically, the buttons were flush and a little more difficult to activate than they should have been. There’s a weird effect with the microphone that seems to amplify all noise coming in through the microphone when on a call, and shunt it, like a runaway freight train, up to the earpieces. I’ve never quite encountered this in a headset, and it was enough to nervously deter me from making calls in noisy environments. Maybe that’s a good thing.

Also, while sound is fantastic for a set at this level, the 600vi didn’t quite make notes at the high end sing as clearly as I would have liked. The perceived lack of definition is only noticeable when compared with the performance of the midrange and low-end — the rest of the package sounds so damn good you want the highs to sound not just very good, but great; although, doubtless that would probably up the price.

Fantastic, life-like sound combined with the comfort and convenience of controls and a mic makes the 600vi essential equipment for entry-level audiophiles. 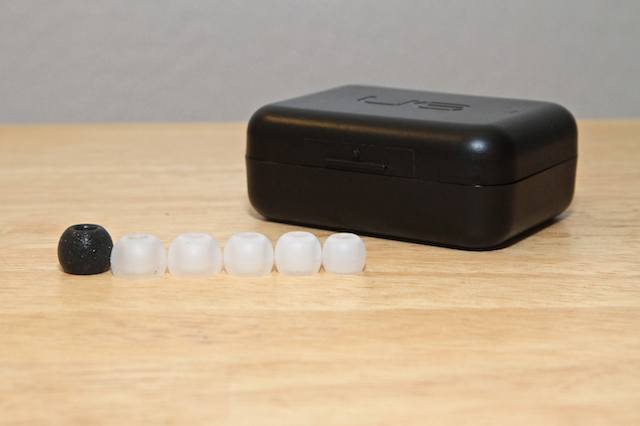