Let’s face it: if there’s one thing Apple is really not known for, it’s making great headphones. The white buds that ship with every iPod and iPhone deliver mediocre-at-best sound (while constantly falling out of your ears), and the microphones built into the phone models tend to pick up nothing but wind.

I was converted a few years ago to Shure headphones, beginning with an old pair of Shure EC2’s. At the time, they were the undisputed champs of portable audio. With the right fit, they could literally block out all external sound, deliver clear bass, mid and treble, and all without breaking the bank.

Since my initial Ec2’s met an untimely demise (Severed Cord. Slamming Car Door.), I’ve used successive models of their replacement, the SE110 and SE115. And I’ve been singularly unimpressed. The sound isn’t as good, the fit isn’t as as good, and, if you can believe it, the build quality is less. Every pair I’ve had has shorted out in one ear or the other, at first temporarily before going away permanently. Though it was my first love, Shure has let me down.

Reluctantly, I’ve left behind Shure. And thank goodness. Because Ultimate Ears has delivered in the SuperFi 5vi a headset near-perfectly matched to the iPhone. I don’t know how I got along for so long without them. 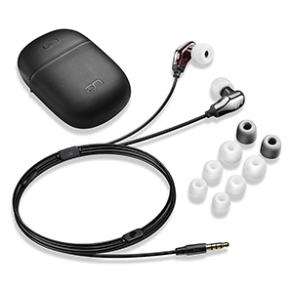 Ultimate Ears, if you’re not familiar, is a company that made its name by offering custom-molded ear monitors for musicians and rich audiophiles. They sound amazing, and they cost up to $1,350. That’s not the SuperFi line is about. Instead, it’s a high-quality in-ear headphone line that makes a tight seal with your ear canal and produces great sound on a small budget.

The headset is very lightweight and uncluttered. It’s a short cable, around three feet long, which actually makes it the perfect length to run from your pocket to your ears with very little slack. The kidney-shaped ear pieces are appealingly designed, chrome on the front, translucent plastic on the inside. As a nice touch, the right bud is a subtle dark red so you don’t need to squint at tiny R and L letters to figure out which one goes in which ear. The SuperFi 5vi set ships with four different sizes of plastic caps for the buds. Unlike the ones that come standard with similar Shure headphones, these are not very flexible — they either fit or don’t. Fortunately, there’s enough of a range that you should be able to find a set that works for you. They also throw in a pair of compressable foam caps, but I find them uncomfortable (and the sound isn’t good either).

The only two features specific to the 5vi model as opposed to the general SuperFi 5 is a small button at the Y-junction of the headphones (which performs all the standard music control and voice control features) and a small microphone attached to the cable just below the right ear. As an iPhone user, both are very welcome — being able to skip through a play list without unlocking the screen is a blessing, and the voice quality for calls is significantly better than what I’ve experienced with either Apple or Shure buds. Additionally, the actual jack is narrow enough to fit into the recessed jack found on the original iPhone, in case you’re one of those users.

But none of that would matter if the sound weren’t good, and it’s excellent. Whether riding on a very noisy commuter train or get focused in a busy office, I found the seal on the phones very capable of blocking out all outside sound even when the volume was very low. At the same time, they allow enough air to pick up plenty of ambient street noise — you can hear cars and light rail trains coming, without having them drown out the audio. It’s nice from a safety perspective.

In recent years, I’ve come to test any headphones by how well they reproduce Radiohead’s “Reckoner” from In Rainbows. It’s a good test, because the song has a lot of layers, a big dynamic range, and a very broad frequency range including mid-range hi-hat, a dancing bass line, and very high falsetto vocals. The SuperFi 5vi’s passed with flying colors. Not only did it reproduce the song perfectly as I knew it, but the headphones actually picked up and made clear both a guitar line and a background vocal track that I’ve never heard before. And the same has been true with virtually everything I’ve listened to. They’re just great buds for being out and about. You can definitely do better for a lot more money, but not in this price range.

Still, they should work on the name. I can’t even begin to express how embarrassing it is to say I’m excited about my Ultimate Ears SuperFi 5vi headset. Especially considering it doesn’t ship with a pocket protector.