Maybe it’s my (only somewhat) jaded inner journalist, but bubbly marketing language almost never rouses me. So naturally, I dismissed the phrases “rediscover your music” and “stunning mobile music fidelity,” printed on the box of Etymotic’s microphone-equipped hf2 earphones, as standard advertising blather.

After a few hours of listening to music through the hf2s I went back and read the box again, this time with wider eyes — because damned if for once some outfit’s marketing department hadn’t made a claim that was actually spot-on accurate. In fact, the thought crossing my mind as I gleefully ripped through my music collection, trying to see how many tracks would give me goosebumps, was that maybe those marketing peeps had even been too subtle about the hf2’s performance — that maybe the box should have just been plastered in wild neon stickers bearing candid phrases like “THESE ARE *&@#$ AWESOME!!” (and that’s why I wouldn’t last long in marketing).

The first half of key to the $180 hf2’s astonishing sonic performance is in how each ear’s single armature transmits sound: accurate, measured, with no fuzziness, buzzing or harshness evident with any type of music I listened to. Bass takes on a warm, enveloping quality, and  the ‘phones seem to transmit the low frequency stuff extremely well; highs are crystal clear and vibrant. Also impressive was that, for the most part (with one small exception, see below), music seemed superbly balanced and smooth, as if every frequency was somehow in perfect focus and brought to the fore.

The second half of the equation are the hf2’s set of eartips. Standard with most of Etymotic’s offerings, the set consists of four pairs of tips that look as if they were ripped straight from a Dr. Seuss book: industrial-sized foam tips; “glider” foam tips, which resemble something launched from the barrel of a Nerf weapon; and two differently sized pairs of truly evil-looking flanged cones. But boy are they effective.

The much longer-lasting flanged tips reduce sound by about 35 decibels. The gargantuan foam tips kill up to 42 dB worth, but degrade with time, eventually needing replacement. All are highly effective to extremely effective at creating a practically airtight seal and preventing sound from leaking in or out. They’re certainly the most effective tips I’ve ever tried — in fact, noise-isolation surprised by equalling or even exceeding that of a good set of active noise-cancelling cans. Which is good, because a tight seal is absolutely critical to the performance of the hf2s, as bass will leak out almost completely with a compromised seal — a characteristic common with many canalphones, but apparently more acute in the hf2.

While all three types (I picked the large flanged tips over the small) seal exceptionally well, I found the big foam tips the most comfortable; the flanged tips took a little more work to insert into my ears (my canals apparently have freakishly sharp bends) but not much, and were almost as comfy. Since the tips seem to need placement deeper into the canal even than most other canalphones, there was a somewhat uncomfortable sense of intrusion in the beginning before I was used to them; but it faded quickly.

The other big thing about the hf2 is, of course, the high-sensitivity microphone, which seems to transmit speech more clearly and with less effort on my part compared to other inline mics I’ve tested. Phone-call test subjects were pleased, and even random Voice Control errors dropped noticeably. However, wind noise seems more problematic than usual, likely due to the high sensitivity of the mic.

As with many microphone-equipped headphones, a single button controls music, calls and Voice Control; volume is absent (though that’s been added for the iPhone 3Gs and 4 on Etymotic’s new hf3, which excluding the new volume control is identical to the hf2). 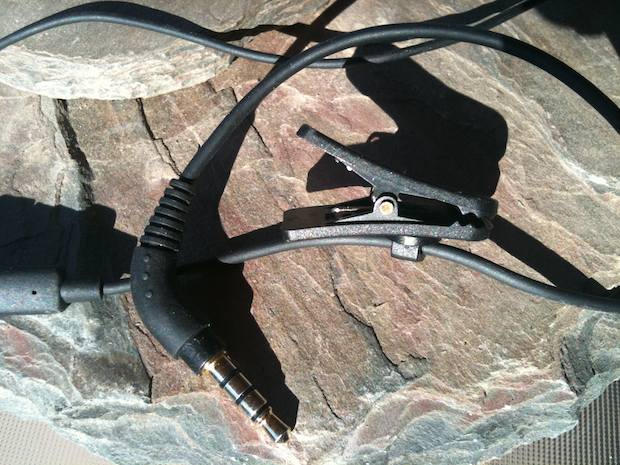 Finally, the hf2s scream quality and attention to detail absolutely everywhere. The J-bend jack is at an optimal angle that protects the cord where it ends at the gold-plated jack, yet makes it easy to swivel; the Kevlar-reinforced cord itself seems impossible to tangle; the massive clip is ugly, but rugged and more useful than the smaller clips standard on other ‘phones; and the long, satin-finished earphone bud bodies are easily gripped when inserting or removing from ears — a design element that doesn’t seem important until you’ve tried the hf2s and realize how difficult it is to get other buds stuffed into your ears.

Also included is a natty zippered case with storage area for extra tips, and an extra set of filters and replacement tool. At about $6 per pair, the filters are an extra expense; but Etymotic says they’re necessary to protect the armatures from wax and should last anywhere from three months to a year-and-a-half, depending on how waxy the user’s ears are.

Sonically, the hf2s outperform canalphones in their class, and even best well-respected earphones priced higher. Throw in their longevity, ergonomics and the excellent mic, and those wild yellow stickers maybe start to make sense.