Every new Mac comes with iPhoto, which is getting better all the time. Still, it doesn’t have all of the features that are made for folks who are really into manipulating their photgraphs. Adobe’s Photoshop is often too much for the budding shooter (and cost prohibitive to boot), and image editors like Acorn – while simple to use and well-priced – don’t necessarily have the “feel” of iPhoto that many Mac users are used to.

This is where FX Photo Studio Pro by MacPhun ($40 in the Mac App Store) comes in.

It has a user interface that is very easy to navigate and takes little to get accustomed to and doesn’t break the bank, all while having a set of features that delivers superior results for those who want to level up their photographs. 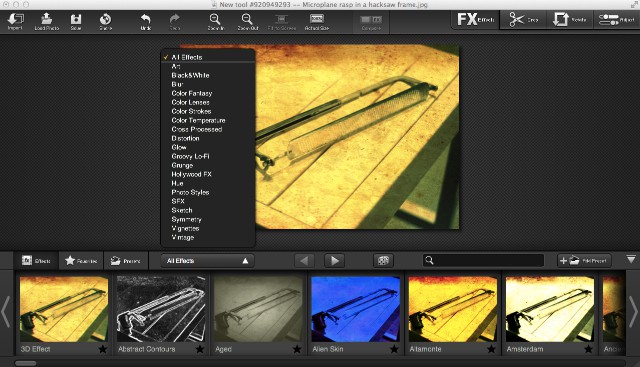 Right off the bat, I fell in love with the user interface of FX Photo Studio Pro. I was able to immediately add effects to an image using the scrollable viewer at the bottom of the application window. The variety of effects was astounding for a product at this price point – and the effects are just scratching the surface of what this photo editor has to offer.

By simply dragging an image into FX Photo Studio Pro, the user is presented with a range of options such as FX effects, cropping, rotation tools and slider adjustments. The slider adjustment screen is easier to work with than iPhotos enhancement option; the sliders are larger for one thing. That may not seem like much for some users, but for users that just want to process their images quickly and effortlessly, this little attention to detail is one of the attributes that make FX Photo Studio Pro such a pleasure to use. 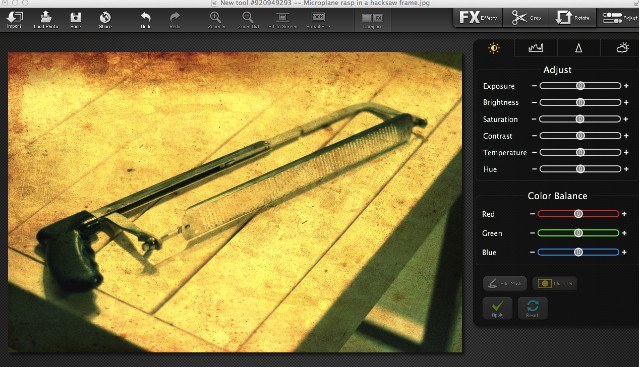 Social sharing is also built in, allowing for users to share their finished photos with friends and family right from within the application. Popular platforms like Facebook, Twitter, Flickr and Tumblr are represented here, along with email if you’d rather send your shots directly to people.

One of the only downsides that I found with FX Photo Studio Pro is that it doesn’t offer much more than apps that I already have, like Acorn. Acorn is more feature-rich and I’ve already adapted to its UI. I don’t know if those who have already invested in higher end image processing applications would need to add this to their arsenal – it offers nothing new to those users.

If you’re not happy with what limited image editing options iPhoto offers and are looking to explore new and creative ways to add some sizzle to your photos, then FX Photo Studio Pro is definitely worth a look. Its user interface is among the best of any image processing application I’ve ever seen and its versatility is incredible for such a low priced piece of software.