Seems like a formula for success: Take a fine, Napa leather iPad 2 case (like Sena’s Folio for iPad 2), add a compact Bluetooth keyboard and an executive touch or two, and the result is the  Sena Keyboard Folio for iPad 2 ($150) — an executive-grade miniature office.

We had high expectations for the Keyboard Folio. Sena just upgraded the keyboard, ditching an error-prone, rubber keyboard for a hard-shell Hippih Expression keyboard — and we were the first publication to receive one for review.

Fine leather cases for the iPad are uncommon enough — those that come with a Bluetooth keyboard in tow are even rarer. Just like the keyboard-less Folio, this is really a gorgeous case — everything from the feel of the leather to the precision stitching reeks of quality.

The leather is padded just enough to feel like it’ll provide the right amount of cushioning should something smack against the case, or if it’s dropped. Inside, a soft suede lining babies the iPad’s back. There aren’t too many cases that look as good while providing so much protection.

The keyboard has some great features, like screen brightness buttons (a la a Mac keyboard — pretty unusual for an iPad keyboard) and a capslock indicator under the translucent multi-function button that serves to pair the keyboard (which was drama free) and connect via Bluetooth. There’s also a power switch along the top edge of the keyboard, just next to a micro-USB port for charging.

Everything feels very secure. The iPad is held in place through a  hook-and-loop flap, as is the keyboard, and both can be removed with little fuss. The whole shebang is kept closed with a snap-clasp.

There’re even three business-card-sized slots along the interior — a nice touch.

Unfortunately, the Keyboard Folio is still somewhat let down by its keyboard, despite the Hippih’s great features. This simply isn’t the easiest keyboard to type with; in fact, it’s probably the least finger-friendly of those we’ve tested this week — the keys are just too close together. And unlike the Adonit Writer, which also has pretty small keys (but larger gaps between them), the Hippih’s keys are raised — instead of indented like the Writer’s — which didn’t help matters.

In order to recline the Keyboard Folio for typing, a stand needs to be unsnapped from the rear of the case and extended to support the half with the iPad. Because of this, there’s no way to use the iPad in portrait mode; you’re stuck in landscape.  And it’s a single-angle landscape at that — there’s no way to adjust the angle, as the Keyboard Folio’s stand must rest at full extension.

It’s a stable setup on a flat surface, but not when things get uneven; no using it on a lap or in other awkward positions.

Though not really weighty, the case, padding and keyboard all add a fair bit of bulk.

The Sena Keyboard Folio’s beautiful leather says “This is an executive’s iPad keyboard case.” “Just so long as that exec doesn’t need to write much,” retorts the case’s keyboard and single, unobliging stand. 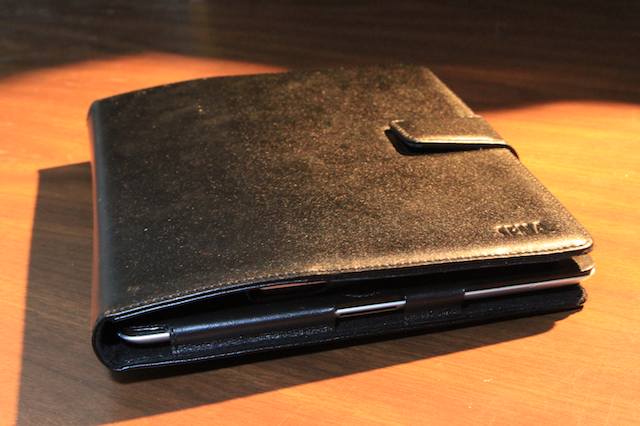 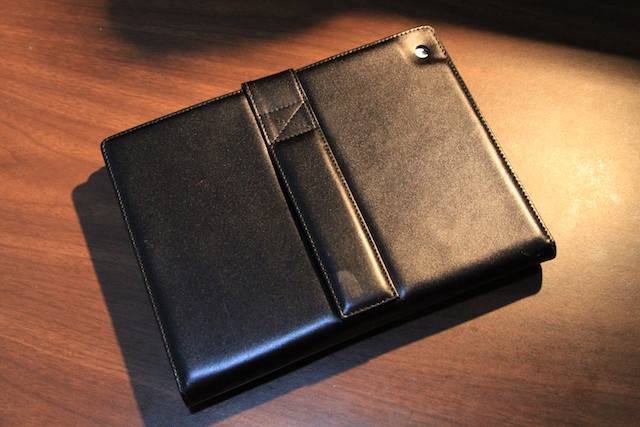 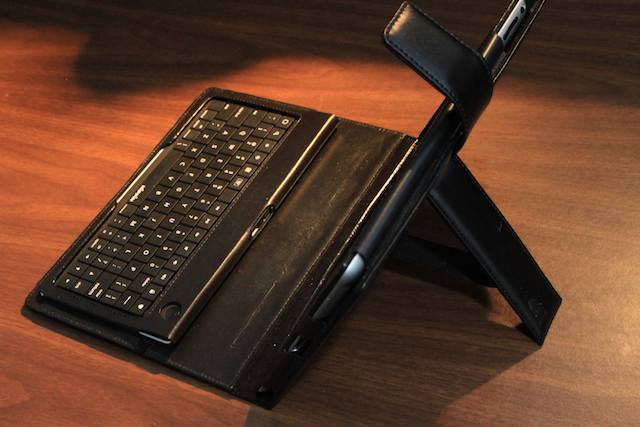 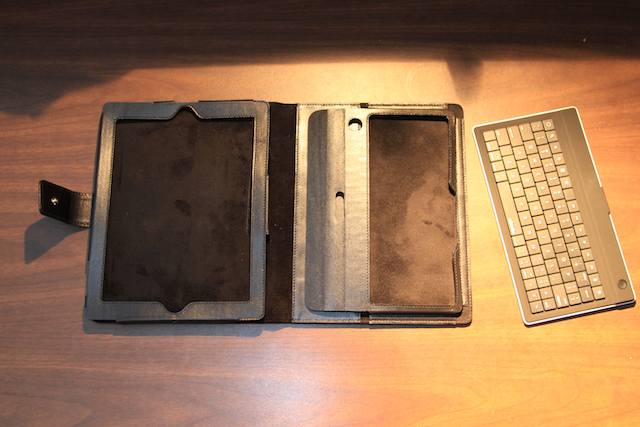