As Apple eagerly awaits to begin construction on its new mothership campus, the folks in Cupertino are also leasing another office complex to accomodate Apple’s growing work force. 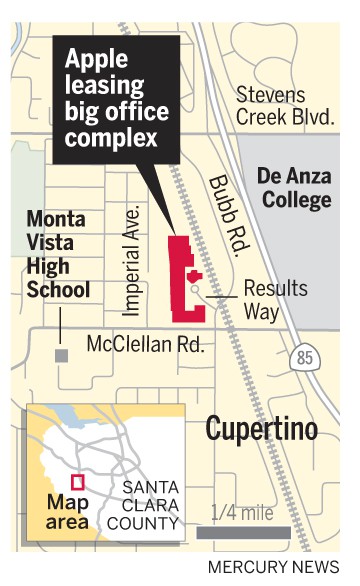 According to Mercury News, this latest addition to Apple’s nine building campus in Cupertino indicates Apple’s need for the larger headquarters that Steve Jobs recently purposed to the Cupertino City Council. Jobs indicated that Apple was going through “remarkable growth” when he presented plans for the company’s upcoming mothership campus, set to be built by 2015.

“This is all good news for the city,” said Kelly Kline, Cupertino’s city economic development manager. “Apple is the premier corporation in Cupertino.”

This newly-leased office complex addition will give Apple access to 373,000 extra square feet, and Apple’s presence on Results Way is considered “temporary.”