This week, Bloomberg, The Wall Street Journal and TechCrunch all published rumors that Apple plans to compete in the mid-ranged smartphone sector, with the launch of a smaller, more affordable iPhone, to be sold alongside the iPhone 4. At Cult of Mac, we predicted as much six weeks ago.

Of course, rumors of a smaller, cheaper iPhone are nothing new. They’ve been around for almost as long as the iPhone itself. And with good reason. Any seasoned Apple watcher will recognize this as Steve Jobs’ standard MO. Launch an iconic, up-market product, allow the market for it to grow and mature, and when the underlying technology becomes cheap enough, introduce a smaller, more affordable mass market version.

Apple Have Done It Before, And They’ll Do It Again

It all started with Steve Jobs’ return to Apple in 1997. He ruthlessly scrapped underperforming product lines, such as LaserWriters, Newtons and QuickTake cameras, to focus on a matrix of just four (see table above). Surprisingly, given how many products Jobs was scrapping, the matrix included two new ones, both of which were cheaper versions of existing products: the iMac and the iBook. It was a bold move given that Apple’s customer base at the time was limited almost entirely to creative professionals. But the company’s switch in focus from pros to consumer proved to be enormously successful. 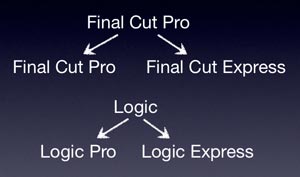 The term “Express” was used again with the launch of an entry level “AirPort Express” to compliment the AirPort base station. The Wi-Fi product line expanded up market as well, with the release of Time Capsule.

Most famously, Jobs repeated the same trick with the iPod, which was joined by the smaller, more affordable mini, then the shuffle and nano. Apple also went up market with the touch.

The idea of a more affordable iPhone, sold alongside the premium iPhone 4 seems very plausible then. But there are aspects of this latest Bloomberg rumor that don’t quite ring true. First, there’s the question of size. It seems unlikely that a cheaper iPhone would be smaller. Smaller phone components are typically more expensive. If anything, we could therefore expect a cheaper iPhone to be larger than the iPhone 4. And besides, if the screen got much smaller, the keyboard would become impossible to use.

And then there’s the rumored missing home button. While recent betas of iOS have exhibited a gesture to return to the home screen, eliminating the need for a home button, I suspect that this is just to make it consistent with Mac OS X Lion, which will feature a similar gesture to invoke the new app launcher screen. In other words, this gesture may be in addition to the home button, rather than instead of it. It seems unlikely that Apple would drop the now familiar and iconic home button altogether – especially because they would want to keep the nano’s UI consistent with the iPhone 4, since they would be sold alongside each other.

Then there are those who argue that Apple is not concerned about market share, preferring instead to preserve high margins and focus on the top end of the market. I don’t buy this argument for a minute. While it is true that the Mac doesn’t compete at the budget end of the PC market, the iPod is a different matter altogether. While Apple will always charge a premium for the quality and design sensibilities of their brand, they are nonetheless very much a mass-market brand. There’s no reason why they can’t compete in the mid-range smartphone sector, and still charge a slight premium for their Apple value-add.

A better argument against an iPhone Nano is the potential fracturing of the iPhone platform. It is true that this has become a major problem for Android, with different manufacturers offering different hardware specs and software configurations. It’s a nightmare for developers attempting to support numerous different configurations. But this needn’t be the case for iPhone. As long as an iPhone Nano has similar specs to the other iPhone models, iOS developers should be in for an easy ride – at least in comparison to Android developers.

So, it’s surely not a question of “if” Apple will launch a second, more mass-market iPhone model, it’s a question of when. The rumors have been around for years. Why now?

There’s a simple, one-word answer to this. Android. Android is… well how shall we put this politely… a “homage” to iPhone. Its success is largely due to the fact that it is free, not that its innovative. Imagine if you had spent years developing something truly awesome, and were planning to make a living out of it. Then your closest friend came along, copied all your hard work and gave it away for free, undermining your business in the process. I think you’d be pretty annoyed. And I think you’d want to do something about it.

Well you can expect Apple to do something about it. No doubt about it.