CUPERTINO, California — For the first time, a big group of developers, students and media were allowed inside the very heart of Apple’s spaceship HQ during WWDC22.

The central office building, known as the Ring, is bigger than the Pentagon. Teams at Apple move in and out between other buildings as projects change — I met several ARKit engineers who recently moved in and were a bit vague on what they were working on. Interesting.

Previously, members of the media had been escorted to the Steve Jobs Theater for press events, which is another building off to the side of the sprawling Apple Park campus. However, the theater would have been much too small to fit the 1,000 developers, 350 students and hundreds of employees attending the WWDC22 keynote viewing party.

This special day for developers — an invitation-only, in-person event at this year’s Apple Worldwide Developers Conference — marked a big step in Apple’s efforts to boost developer trust. Apple also gave attendees a first look at the new Apple Developer Center located just across the street from the Ring.

See the full gallery below for more than 80 pictures of Apple’s campus.

Around 10 a.m., I arrived at Apple Park. Walking north up Tantau Avenue, I walked past the Developer Center to check in at the Apple Park Visitor Center.

Apple employees in yellow shirts lined the sidewalk at about every 10 feet. The crowd control was immaculate and rehearsed. After a group of about 10 people gathered, we were led to the Apple Developer Center to begin our tour.

The table in the AR testing room has design concept sketches alongside screenshots of the final product.

After touring the various rooms, we were led to the last room of the tour, the Big Sur Theater. 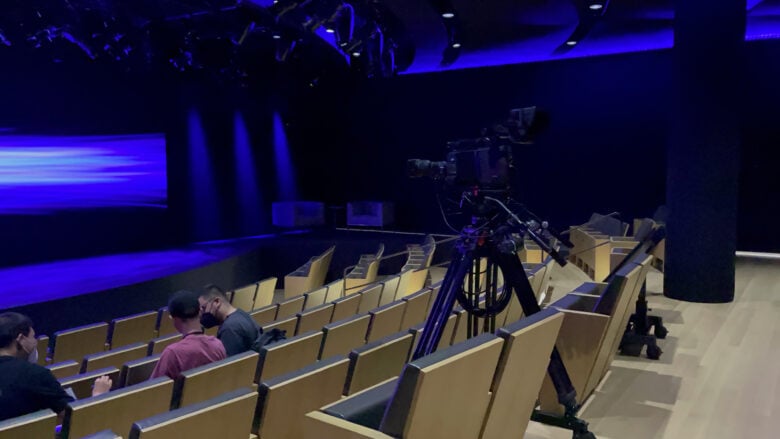 Two lounge chairs sit to the right of the stage. They can be brought out to the center of the stage for events like The Talk Show Live.[/caption]

After the tour of the Developer Center, I went back to the Visitor Center to have a look around.

Visitors are handed an iPad running a custom app. When you scan the model, the app uses ARKit to superimpose a big, animated 3D simulation of the campus.

The back side of the Visitor Center houses an Apple Store that sells exclusive items.

The big day at Apple Park was finally upon us Monday.

After checking in, we were led through the gates, down a sidewalk, around the Ring, over to breakfast.

Getting ready for the keynote

After the keynote, attendees flowed back inside for lunch.

The Developer State of the Union

I stayed inside for the State of the Union presentation. I was seated at a table with several Apple engineers, from whom I got some good inside information.

Tour of the building

After the State of the Union, I went on a tour of the building up the third floor. Tour guides spoke at each stop explaining highlights of how the building was constructed and designed.

Beauty shots around the campus

After everyone filtered out of the campus, the Apple Park Visitor Center remained open for another hour for last-minute purchases.

I joined a group of developers for dinner at Santana Row, where I ate the best Mexican food I have ever eaten. After hours of talking about the day’s events, exchanging phone numbers and emails, we wished each other luck in coming back next year and I went back to my room to pack up.