According to early reviews, you should absolutely rush out to get a new iPad Pro when the tablets go on sale Wednesday.

The iPad Pro was already the best tablet money could buy. And yet, Apple somehow made it even better with an improved design, an edge-to-edge Liquid Retina display, and an A12X Bionic chip that delivers unbeatable performance.

Don’t just take our word for it. See what the reviewers are saying below.

Unsurprisingly, the iPad Pro’s new A12X Bionic chip makes it insanely fast. It outperforms most laptops and even the MacBook Pro in benchmark tests. And in everyday use, it doesn’t disappoint. This tablet can handle everything you throw at seamlessly.

“Nothing is ever slow, and it always feels like there’s more headroom to work with,” writes Niley Patel for The Verge. “We have an early build of Photoshop for iPad, which is coming next year, and it handled a file with tons of layers just fine…. We were able to import several minutes of 4K footage into Adobe Premiere Rush, edit them, and export without breaking a sweat.”

The new iPad Pro is “pretty much a laptop in terms of performance thanks to the new 7nm processor,” writes Stuart Miles for Pocket-lint. “Side-by-side with an iPad Pro 10.5 we have noticed a considerable difference in app loading times, certainly on processor intense apps like iMovie, Affinity Photo, Procreate, and games like Fortnite or Asphalt 9: Legends.”

David Phelan of The Independent describes the new iPad Pro as “extremely fast in every way.” He adds, “It is so powerful, it’s able to make the most of advanced apps, such as the upcoming (and much-anticipated) Adobe Photoshop CC.”

“No apps or games I’ve used have been able to make the Pro break a sweat at all and benchmark numbers have been impressive,” adds Jeffrey van Camp of Wired. “By every measure I can think of, these are the best, most powerful, most capable iPads I’ve ever used. They put other tablets to shame.”

It’s not just the iPad Pro’s processing power that’s astonishing, either. Apple claims its improved GPU, which is 1,000 times faster than the original iPad’s, can now deliver visuals on par with Xbox One S graphics. Sadly, none of the games currently available for iOS take full advantage of it just yet. We’ll have to wait and see what developers come up with later.

The iPad is finally following Apple’s vision for the future of mobile devices. Part of that is dramatically slimmer bezels that allow larger displays with beautifully rounded corners to fit into smaller footprints. Like the iPhone XR, the new iPad Pro has a Liquid Retina display that uses LCD technology (as opposed to OLED) — and it’s even better here.

“The screen quality of the new iPad Pro 12.9 is what sells this device — it’s just so expansive, and impressive for something that’s more portable than you might imagine,” describes Gareth Beavis for TechRadar. 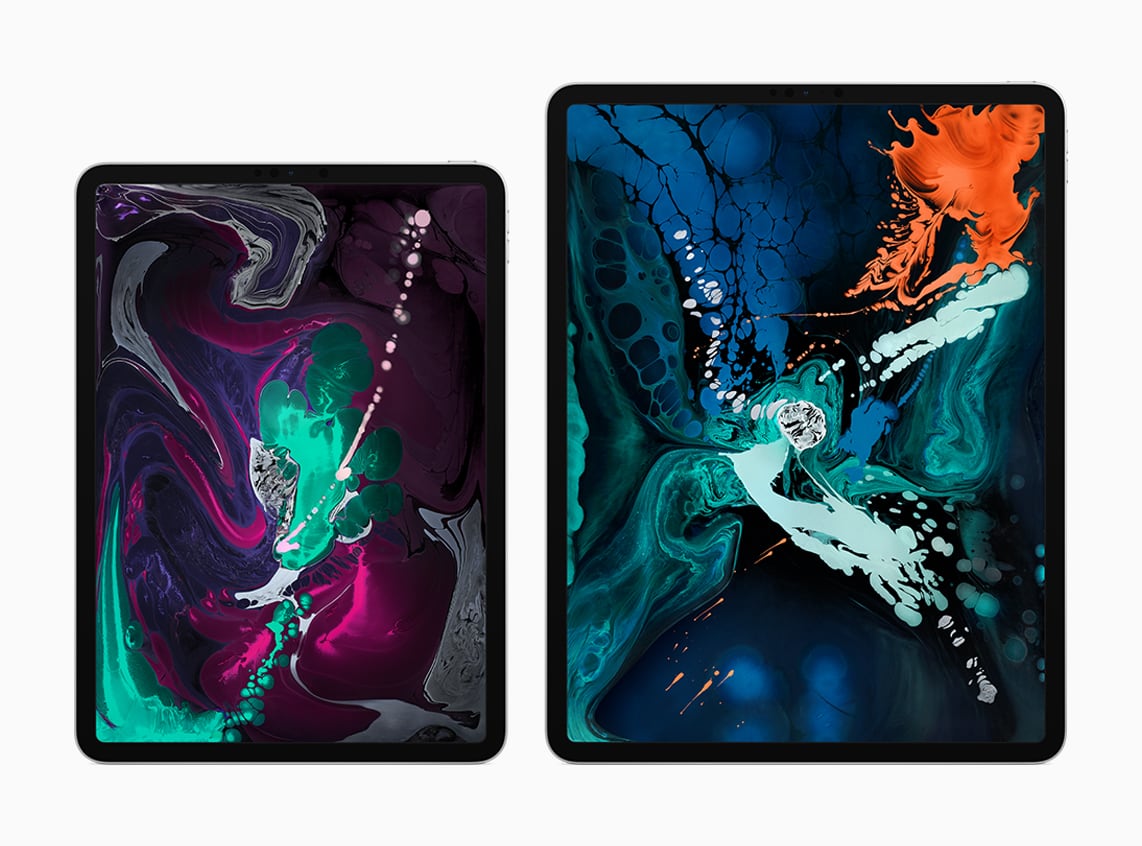 “It would be a total waste of $999 (or more) to use the iPad Pro 12.9 just for bingeing Netflix, but damn does this screen look good,” writes Mark Spoonauer for Laptop Mag. “I streamed Ugly Delicious, a show about food, and this panel made a brick oven look mesmerizing. It looked so good I had to pause the frame when it showed the rich orange flames and oozy pizza cheese up close.”

Wired calls the new Liquid Retina screens “gorgeous and packed with pixels,” adding that its “color is vibrant and precise enough for Photoshopping and minute color tweaking if needed.”

That Liquid Retina displays means Apple did away with the iPad Pro’s Home button this year — just as we expected. But you shouldn’t miss it. Just like the iPhone, intuitive gestures are baked in to replace it, and they work wonderfully. They’ve also been around since the introduction of iOS 11, so you’re probably already used to using them.

One thing you might miss about the Home button is Touch ID, but the new iPad Pro offers even more advanced Face ID — and it’s excellent. Not only does it work in any orientation, but it tells you if you’re accidentally covering the iPad’s camera and preventing Face ID from working.

“If you hold the iPad in landscape and cover the camera with your hand, it’ll tell you, with an arrow pointing to the camera on the lockscreen so you can uncover it,” explains Patel. “If you have the camera at the bottom, the lock screen will instruct you to look down so Face ID can properly see your face.”

Patel also points out that if you use Apple’s new Smart Keyboard, you can double-tap the spacebar to invoke a Face ID unlock, which is “very reminiscent of Windows Hello” on PCs.

“While muscle memory will see you reaching for the Touch ID button the speed and convenience it brings to unlocking your iPad is fantastic,” adds Miles. “The introduction of Face ID also brings Animoji, Memoji and Portrait Mode (front facing only) on the iPad for the first time.”

Apple didn’t just slap a Liquid Retina display into an old iPad Pro shell for its newest models. Apple redesigned the 2018 iPad Pro from the ground up. The tablets are amazingly thin, with sharper, straighter edges reminiscent of the original iPad or the iPhone 5. This new look has been a hit with reviewers.

“This is not an iPhone writ large, though, as the aluminum iPad Pro’s design is less playful and more industrial-chic, with perfectly flat sides and gently rounded corners,” says Laptop Mag.

“Having used the previous iPad Pro 12.9 models, this one feels like their futuristic cousin, shorn as it is of those chunky bezels,” writes Beavis. “The outer rim is now much slimmer and cleaner than before, and you can just make out the sensors locked away on the left-hand side…. Compare this to the iPad Pro 12.9 of 2015 and you’ll feel like you’re holding something truly next-generation.”

Phelan says he was worried that the new iPad’s sharper edges would be uncomfortable to hold, “but that turns out not to be the case…. The new iPad Pro is a huge upgrade from previous models, and is easily Apple’s most accomplished and attractive tablet yet.”

“It’s also impossible to look at the iPad Pro and not be struck by its design,” says The Verge. “This is the first truly new Apple mobile hardware design in a long while, and it has a deeper connection to the MacBook Pro than the iPhone or previous iPads.”

Another big change to the iPad’s design is the removal of its proprietary Lightning cable in favor of much friendlier USB-C. It might take some getting used to if you have a bunch of Lightning accessories, but there’s no doubt it was the right move.

USB-C lets you connect almost anything to the new iPad Pro, including keyboards, headphones and hubs that allow you to attach USB-A peripherals, HDMI or Ethernet cables, and SD cards. You can even use it to output to a 5K display, or to charge other devices like your iPhone or Nintendo Switch. But it does have its limitations.

“Like everything about the new iPad Pro, that USB-C connector is both remarkably powerful and incredibly frustrating,” writes Patel. “With one huge exception, most normal stuff you’d plug into a USB-C port works without fuss, and a bunch of other things work if you have an app that supports it…. But one extremely important category of devices will definitely not work: iOS does not support external storage. You can plug as many flash drives or hard drives as you want into the iPad Pro’s USB-C port, and nothing will happen.”

“The move to USB-C opens up connectivity options,” adds Miles. “You can plug in SD card readers to download camera photos quickly — it’s much faster than Lightning — external monitors with apps either offering mirrored view or dual view with different things displaying on different screens, and a host of other things like Ethernet adapters or even hard drives, although the latter will need to have an accompanying app from the manufacturer because iOS 12.1 doesn’t offer file directory support.”

The new Apple Pencil is a great upgrade

In addition to a new Smart Keyboard, the new iPad Pro works with a new Apple Pencil (optional). The upgraded stylus magnetically snaps onto the side of the tablet for charging, which is a huge improvement over the Lightning solution for the last model. And it’s as good as you’d expect.

“The new Apple Pencil complements the new iPad Pro 12.9 pretty well, and it’s so much better now that it’s able to sit magnetically on the top and charge,” says TechRadar. “Using the Apple Pencil on the new iPad Pro 12.9 was a strong experience … with the latency of the ‘touch to brush’ the best we’ve felt on an iPad so far – much more than with previous Pros we feel like this is something we’d want to regularly use. It really does feel like it could replace a notepad, and on the larger screen it’s much easier to see what you’re sketching out.”

“The Apple Pencil is my favorite [iPad accessory],” writes van Camp. “Three years after its debut, the refined Pencil is still the most responsive, accurate digital writing tool I’ve ever used. It’s fun to try out different virtual drawing tools, like colored pencils, and as a leftie, I love that iPad never thinks I’m trying to draw with my palm.”

“The new Apple Pencil is one of the best upgrades for the iPad Pro,” says The Independent.

So, there you have it — everything about the 2018 iPad Pro is better than its predecessors. It’s beautifully designed with a stunning Liquid Retina display and unbeatably fast. But is it worth your hard-earned cash?

“Apple has produced an iPad that we suspect many pro users will want — and not just because of the increase in screen size or the thinner design,” says Pocket-lint. “There is so much here that blurs the lines when it comes to working on the go that it will pique the interest of those who have started to question whether they still need a laptop.”

“The new iPad Pro is a huge upgrade from previous models, and is easily Apple’s most accomplished and attractive tablet yet,” says The Independent. “Its speed and versatility are remarkable, arguably more than many will need, but for creatives especially, it’s going to become the tablet of choice.”

“Is the new iPad Pro a stunning engineering achievement? Without question,” concludes The Verge. “Has Apple once again produced mobile hardware that puts the rest of the industry to shame when it comes to performance, battery life, and design? Yep. Is the iPad Pro the best, most capable iPad ever made? It certainly is.”