The first iPhone XR reviews are out just a few days before the handset makes its official debut, and one thing’s clear: This is one of Apple’s best smartphones to date.

Despite being a more affordable alternative to the iPhone XS, the iPhone XR is just as good in many areas, and even better in a few others. It makes some sacrifices to be more affordable, but it certainly lives up to the promises where it counts.

Here’s what the early reviews are saying so far.

iPhone XR is a powerhouse

The iPhone XR might be considerably cheaper than the iPhone XS, but unlike Apple’s more affordable options in previous years, it doesn’t pack aging components into a new shell. The iPhone XR carries exactly the same A12 Bionic chip at its pricier counterparts.

“The iPhone XR offered basically identical performance to the XS as I used it day-to-day, and even hit basically the same benchmark numbers in some quick tests,” reports Nilay Patel for The Verge. “It has slightly less RAM than the XS at 3GB instead of 4, but it’s pushing far fewer pixels, so it didn’t seem to matter.”

“In Geekbench 4, the iPhone XR rightly scores just under the iPhone XS and XS Max, but it’s faster than any Android smartphone we’ve tested to date,” explains Julian Chokkattu of Digital Trends. “This phone can tackle almost anything you throw at it.”

“The A12 Bionic processor in the iPhone XR is just as fast as those in the iPhone XS and XS Max, which means you’re getting a phone that beats the best Android flagships for hundreds of dollars less,” adds Mark Spoonauer of Tom’s Guide.

“The Apple iPhone XR might compromise in a couple of areas, but power and performance are most definitely not one of them,” explains Stuart Miles for Pocket-Lint. “Having extensively used the iPhone XS prior to testing the iPhone XR, it’s clear there is no difference in terms of processing power or capabilities.”

Perhaps the biggest reason to buy an iPhone XR for many is its design. It’s only the second iPhone to be offered in a range of beautifully bright colors, including blue, yellow, coral, and red — and it’s downright gorgeous.

The iPhone XR is not quite as premium as the iPhone XS, with aluminum used in place of stainless steel and weaker glass on its back, but it doesn’t matter.

“Build quality is up to Apple’s usual standards, which is to say it’s impeccable,” writes Chris Velazco for Engadget. “The iPhone XR may cost less than the phones I reviewed a month ago, but it doesn’t feel like it.”

“With Apple, design is always paramount, as are build quality and intuitive use. But Apple has excelled itself in a whole new way this time,” writes David Phelan for Independent. “Take a look at an iPhone XR in the flesh before you buy. I’d say it’s definitively as attractive as the XS.”

“Apple’s industrial design chops continue to shine with the iPhone XR’s color finishes,” writes Matthew Panzarino for TechCrunch. “My tester iPhone was the new Coral color and it is absolutely gorgeous. The way Apple is doing colors is like nobody else.”

iPhone XR has a decent (not spectacular) display

The iPhone XR does have to make some sacrifices to be more affordable, however. One of those is its display, which is a traditional LCD rather than the superior OLED screens installed in iPhone XS and XS Max. But don’t let that put you off.

The XR’s edge-to-edge Liquid Retina display is the best LCD in the industry, Apple says — and according to some reviewers, it lives up to the hype. You won’t miss 3D Touch, either.

“The iPhone XR’s 6.1-inch Super Retina LCD is one of the brighter and more colorful smartphone displays out there,” says Tom’s Guide. “This LCD fared well in our lab tests as well. It registered an excellent 589 nits of brightness, and I had no trouble reading this screen in direct sunlight. That number blows away the Pixel 3 XL’s 362 nits.”

“The overall screen quality, as ever with an iPhone, is excellent, and the new 6.1-inch Liquid Retina LCD technology does a good job of delivering sharp lines and punchy colors,” writes Gareth Beavis for TechRadar.

“The XR display is the brightest iPhone LCD display Apple has ever made,” adds John Gruber of Daring Fireball. “It looks terrific.”

It’s clear Apple has spoiled us with the OLED displays in the pricier iPhone lineup, however. Many reviewers note that the XR’s display is disappointing when compared to an iPhone XS screen, while its lower resolution is all too obvious. Its bezels are noticeably thicker, too.

“Look closer and pixels will start to be visible,” notes Digital Trends. “We think Apple could have added at least a 1080p screen here — you’ll hardly find an Android phone in this price range with such a low-resolution screen…. We think the screen will be good enough for most people, but it’s among the XR’s few shortcomings.”

“Yes, you can tell it’s different from a premium Apple display, and yes, it would’ve been nice if Apple just went with the industry standard 1080p,” says Engadget. “Even so, I’ve found this display to be good enough. And I seriously doubt the average person upgrading from an older iPhone will find much to complain about.”

“The iPhone XR LCD definitely shifts a little pink and drops brightness quickly when you look at it off-axis, which often leads to a bit of a shimmery effect when you move the phone around,” explains The Verge. “You will also definitely notice the huge bezel around the entire display, which flows into the notch.”

“To my eyes, the biggest difference between the XR and XS displays is the slightly larger bezel around the XR display — not the displays themselves,” adds Gruber.

iPhone XR has a terrific camera

Apple chose to stick with a single rear-facing camera lens for the iPhone XR — another sacrifice to cut costs — but for the vast majority, it won’t matter one bit. If you can live without digital zoom, you’re probably going to be very happy with camera performance.

“Overall, I think most people who are in the market for an iPhone XR will be happy with its camera — it’s a significant update from previous iPhone cameras, and, like the XS, it makes the iPhone X look downright bad,” reads The Verge’s review.

“It’s the exact same 12-megapixel wide-angle camera Apple uses in the XS and XS Max, and it still produces some lovely photos,” says Engadget. “You’ll find a lot of detail and some excellent colors in the resulting stills, and it’s been surprisingly handy in low-light thanks to its f/1.8 aperture and sensor with deeper tranches between those pixels.” 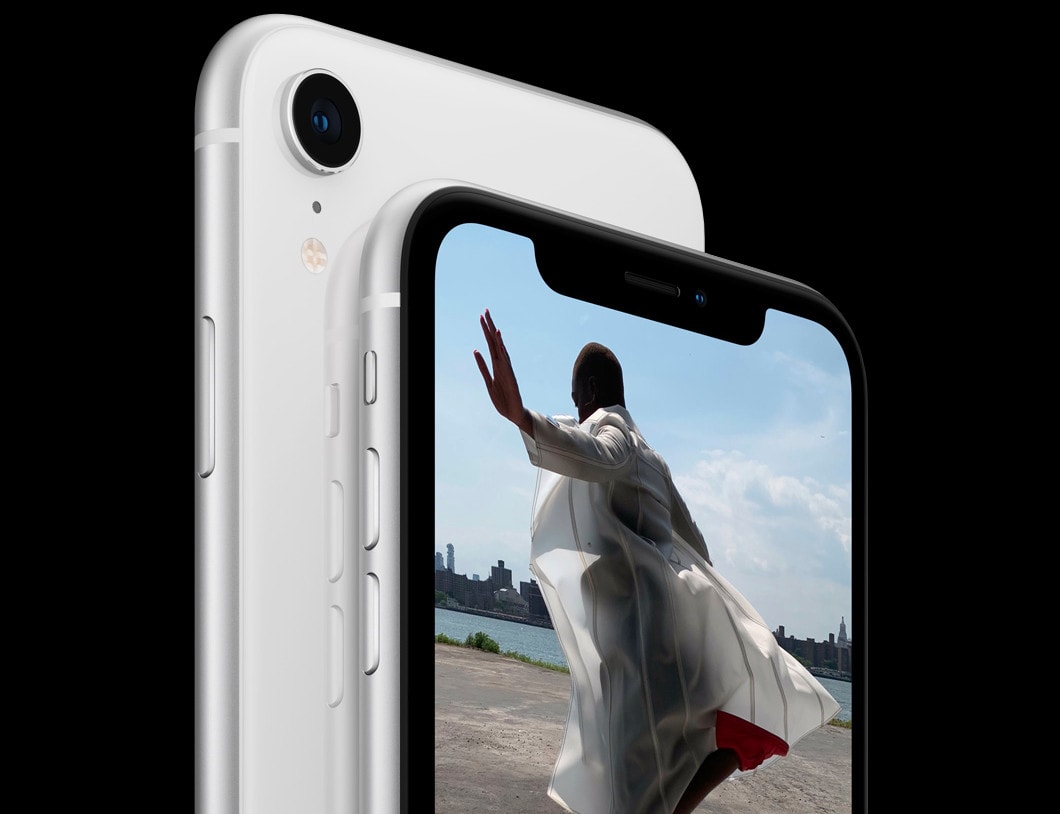 “If you’re worried that the single-lens iPhone XR won’t capture photos that are as good as those from the dual-lens iPhone XS and XS Max, you can stop worrying now,” adds Tom’s Guide. “This phone has the same stellar wide-angle camera sensor as its pricier siblings and the same Smart HDR functionality, which delivers better highlights in the shadows.”

“The iPhone XR’s lone rear-facing camera is exactly the same as the wide-angle camera on the XS — same lens, same sensor, and in my side-by-side testing, the exact same image and video quality,” describes Gruber.

Most reviews point out that the iPhone XS and XS Max do take more impressive photos and videos — and offer optical zoom, which the XR does not have — but aren’t significantly better. In fact, in some cases, the XR actually takes better photos.

“I preferred the XR’s portrait mode to the XS, because the XR’s brighter f/1.8 lens and larger image sensor is much better in low light than the telephoto camera the XS uses for portrait shots,” concurs The Verge. “The quality of XS portrait mode shots tends to drop fairly quickly in low light, but the XR is actually pretty respectable.”

The iPhone XR delivers the best battery life of any iPhone, Apple says. It should even last longer than the iPhone XS Max in between charges. But does it live up to its promises?

“The iPhone XR completely backs up one of Apple’s big claims: that it offers the best battery life of any phone from the Cupertino brand,” says TechRadar. “Finally, we’re looking at an iPhone that can last for the whole day without giving battery anxiety.”

“The iPhone XR has the longest battery life of any iPhone ever made,” says Gruber. “All three new iPhones get good battery life, but it’s really interesting that the lower-priced XR gets the best.”

“The iPhone XR’s battery won’t give you anxiety,” confirms Digital Trends. “This phone will easily get you through a full day, and it may be able to stick around for a few hours the following day if you forget to charge it.”

The verdict on iPhone XR

If the iPhone X or iPhone XS lineups didn’t exist, the iPhone XR would be easily considered Apple’s best smartphone to date. It might be the more affordable option, but it’s a damn good phone that beats much pricier handsets in some key areas.

“For those people, who haven’t upgraded their iPhones in a while or who want a taste of what Apple is capable of without spending $1,000, the XR isn’t just a great, cheaper iPhone,” concludes Engadget. “It’s a great iPhone, period, and, for that matter, it’s the iPhone most people should buy.”

“The iPhone XR has shockingly few trade-offs compared to the iPhone XS and iPhone XS Max given that it costs $250 to $350 less,” says Tom’s Guide. “In fact, many may prefer the iPhone XR over Apple’s pricier flagships for two reasons beyond the cheaper price: more color options and longer battery life.”

“The iPhone XR is one of the best handsets Apple has ever made, and that’s mainly down to the excellent battery life,” adds TechRadar.

“It may be missing a few features, but this is the iPhone that will make others yellow, blue, or coral with envy,” says Digital Trends. “The colors are stunning, battery life is great, Face ID is still industry-leading technology, iOS gestures are intuitive, the camera is superb, and performance is fantastic. This is the iPhone to buy.”

Gruber puts it simply: “It sounds too good to be true, but the XR is almost as good as the XS models at a far lower price. Dollar for dollar, the XR is almost certainly the best iPhone Apple has ever made.”

Have you preordered yours yet?