Basketball star Jeremy Lin didn’t make the NBA with the help of an iPhone or iPad.

But Lin could help the next generation raise their game thanks to an AI-powered iOS app he helped launch with a former Apple engineer.

The HomeCourt app debuted in July but already has been added to the training programs of NBA and college teams, like the Boston Celtics, Philadelphia 76ers and Duke and Stanford universities.

“I visit young players all over the world and I often get questions about how to improve their game, especially in places where the basketball infrastructure is less mature,” Lin said for a story published in the South China Morning Post. “One common misconception is about practicing harder or longer, but it’s not that simple. It’s also about working smart.”

The Atlanta Hawks point guard is one of the main investors in the start-up NEX Team co-founded by David Lee, who left a job as senior engineer manager at Apple after eight years to launch the company. Former NBA star Steve Nash and Dallas Mavericks owner Mark Cuban are also among the investors.

The HomeCourt app works with an iPhone or iPad to record video of shots taken by a player during practice and providing real-time data that measures accuracy from different spots on the floor as well as foot speed and the height of vertical jumps.

It provides edited clips and also serves as a platform for coaches and players to interact. The app is free up to 300 shots recorded per month and available for unlimited use at a monthly subscription rate of $7.99. 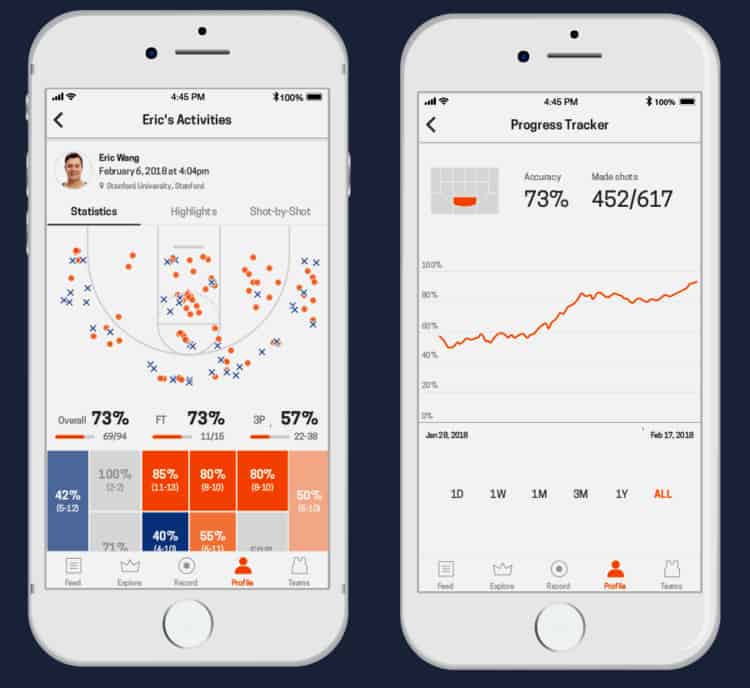 Coaches, trainers and players are using more tech tools to measure performance as sports teams get more immersed in analytics to gain an edge, find weaknesses in opponents and break-down technique.

Boston Red Sox slugger J.D. Martinez videotapes every practice swing and game at-bat with two iPads so that he may study the mechanics of every swing. He credits the iPad for keeping his swing pure and making him one of the best hitters in baseball.

The idea for HomeCourt came to Lee after he failed to make a single shot during a pick-up basketball game in front of his family. He wanted something that could record his practices so that he could show his family how he normally shot. From there, the idea grew in sophistication.

“You can’t improve what you can’t measure,” Lee told the newspaper.