Good cable management is harder than it looks. I should know: Both my home office and my work office are a mess of wires, despite trying to sort things out numerous times.

Unlike my failed attempts, this week’s three iSetups submissions get it down to a fine art. iSetups is our new show that highlights the best Apple-centric setups submitted by our viewers. (You’ll also get plenty of tips and tricks for how you can improve your own setup.)

The first of this week’s three setups comes from Cult of Mac YouTube subscriber and cloud solutions architect Dale Kurt-Murray.

The first thing that stands out about Dale’s setup is the brilliant ambient lighting surrounding his desk and displays. That’s from two Philips Hue Bloom bulbs on either side of the displays and a Phillips Hue light strip spanning the back of his desk.

His main computer is a mid-2012 13-inch MacBook Pro with 16GB of RAM and an upgraded set of 512GB SSDs. His two LG 25UM57 monitors appear to be floating above his desk, thanks to a Matrox DualHead2GO multi-display adapter. This is a really clever way of saving valuable desk space and avoiding having monitor stands sitting directly on the desk.

His speakers are AudioEngine A2s, which he uses along with an AudioEngine D1 digital-to-analog converter. On top of his beast of a MacBook, Dale also owns a 64GB iPhone 6 and an iPad mini (he says he likes to spend his time working or relaxing rather than chasing the latest handheld releases).

For his primary Mac peripherals, Dale uses the Vortex Pok3r keyboard with custom white LEDs and the ever-popular Logitech MX mouse. To keep his cables out of sight and out of mind, he utilizes an Ikea Signum cable-management tray mounted underneath his desk to tuck them away neatly. Some 3M tape sticks the wires to the edges of the desk to ensure that no strays can be seen.

All of the products I could find from Dale’s setup are in a nice, neat list right here.

Ricardo Ortiz’s monochrome setup is super-clean thanks to the symmetry of his dual HP 22es monitors and Ikea Alex add-on unit. His main computer is a late-2013 21.5-inch iMac with a 2.9GHz i5 processor and 8GB of RAM. It’s raised up on a Twelve South HiRise stand, which I personally love for two reasons. First, it’s great to place hard drives and other peripherals underneath and out of the way. Second, it helps with my posture since I crouch over less into the screen when I use it. It helps me sit back and look up.

On either side his iMac, Ricardo uses Harman Kardon Soundsticks II, which are perfect for the minimalist and symmetrical look of his setup.

This is one of the cleanest setups submitted to iSetups to date. I love how he’s kept the white, silver and black theme throughout. The matching aluminium shelf and noticeboard get perfectly incorporated, tying it all together.

All of Ricardo’s featured products can be found here. 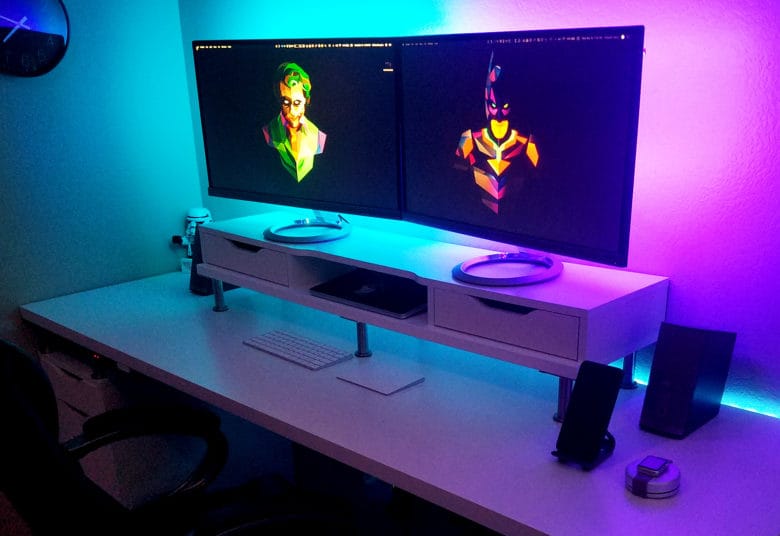 Last but not least is a submission from Richard Lopez. As with the two previous setups, he manages to keep any and all wire chaos at bay. His workhorse is a 13-inch 2015 MacBook Pro with a 256GB SSD and 8GB of RAM.

It sits in a Landing Zone dock to make it super-easy to switch from laptop to desktop. Richard went for a dual-screen setup, choosing 27-inch Asus MX279H monitors for consuming his Plex library, playing his games consoles and working away. He can hop quickly from one to the other thanks to an HDMI switcher mounted discreetly under the desk.

Richard chose some of my favorite speakers: the Bose Companion 2s. I don’t think there’s a better choice when it comes to bang for your buck. (I own the Bose Companion 2 Series III speakers, which offer great volume with super-rich bass and clarity, all for the low price of $99 on Amazon.)

Philips Hue light strips add some ambience and highlight all of the cool tech.  Also on the desk, you’ll find a 1st Gen 42mm Apple Watch sitting in a Nomad Apple Watch charger. Richard says he’s most proud of how clean and minimal his setup looks — which I couldn’t agree with more.

If you would like to submit your setup for possible showcase on iSetups, there are two ways to enter.

Film a video of your setup and edit it to be between 60 and 90 seconds in length. Don’t include music or graphics. Instead, create a voiceover for your video talking about:

Also include a writeup (in Word, PDF or Pages) listing all the products featured. This will be used to create links for each product.

If you’re not comfortable creating a voiceover, you can submit photos instead.

Send us three to 10 high-quality images, including an overall image of your setup and close-ups of anything worthy of featuring. Also include a Word document answering the questions below, along with the names for each product featured (please try to include desks, accessories, etc.).

Send all submissions to Stephen@cultofmac.com with the subject line “iSetups submission.” Please include your name (and YouTube channel if applicable).

iSetups episodes will air the each and every Friday, so keep your submissions coming in!

Make sure to subscribe to the Cult of Mac YouTube channel to stay up-to-date with all the latest iSetups episodes, plus Mac and iOS tutorials, reviews and more!