Bank of America has announced that it is rolling out the ability for Apple Pay-using customers to withdraw money from its ATMs.

While still only available in select markets, the ATMs are kitted out with an NFC reader and Apple Pay logo. To use the feature where it is available, users must select the Bank of America debit card in their digital wallet, then hold their iPhone over the contactless symbol on the ATM, before entering their debit card pin to start the transaction. 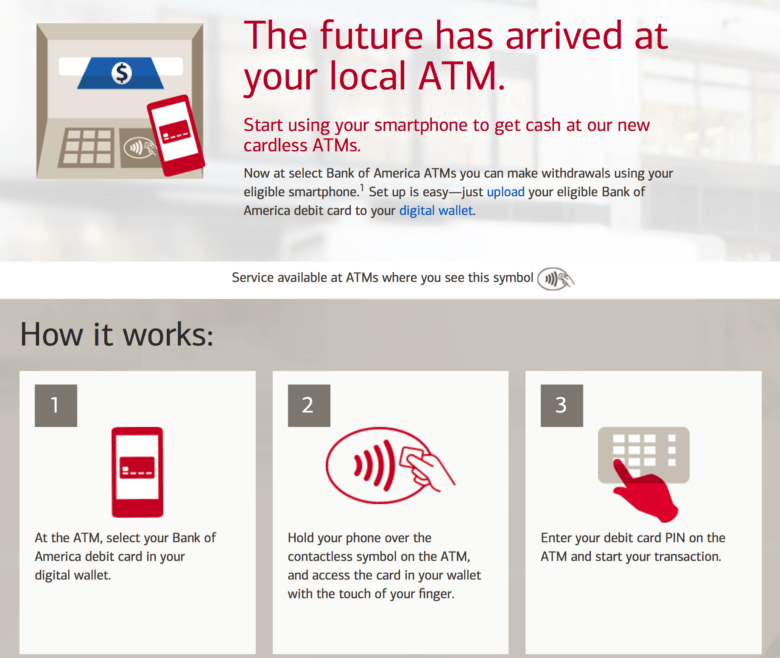 Implicit in that is that the technology only works with Bank of America cards, while other bank cards will receive an error message — even when using a compatible ATM. Earlier this year, both Chase and Wells Fargo announced plans to offer a similar service, and it’s likely more banks will jump on board over time.

Bank of America says that, right now, “Consumer Debit Cards, US Trust Debit Cards, Small Business Debit Cards (owner card only)” are supported by the service. The ability to deposit funds is not yet available.

Do you use Apple Pay? Whether you do or you don’t, let us know your reasons in the comments box below. Together with the various innovations Apple announced at last week’s WWDC, it seems that Apple Pay is becoming a more and more useful service.