Yesterday, the launch of iOS 9.3 added Night Shift to Apple’s mobile devices. It’s a really cool feature that might help make you healthier. Jailbreakers have enjoyed an app with the same functionality for years, but now it’s legitimate and poses less of a risk of completely jacking up your iPhone or iPad.

Night Shift gives you the option of warming up the light your display emits so that you get less harsh, blue rays before bed. The idea is that your screen’s usual output tricks your body into thinking that it’s still daytime, and that can make it harder to fall and stay asleep. So if you’re used to checking some e-mails or reading some news before you conk out, it might help you rest easier.

Night Shift isn’t on by default, so you have to go looking for it. Head to Settings > Display & Brightness, and it’s right there under your brightness setting. 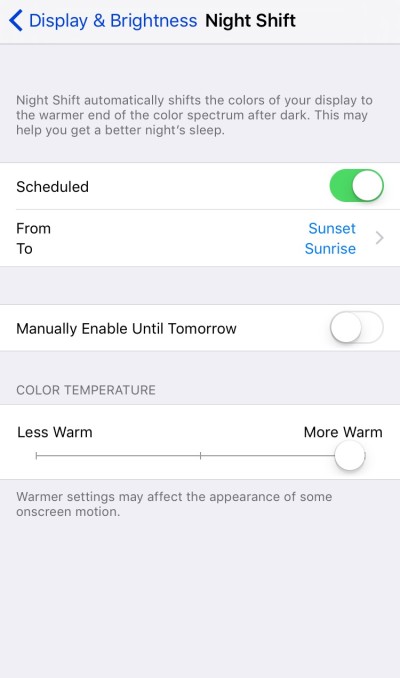 It’s also important to know that Night Shift isn’t available if you’re running Low Power Mode, and your device will tell you as much if the latter feature is on. Once you can get into the menu, the first thing you’ll want to do is set the “Scheduled” slider to the “On” position. That will let you set the times at which Night Shift will run.

You can set custom times if you like, but a pretty cool and low-maintenance option is to set a dynamic timer. If you click the blue default times on the menu — mine says 10 p.m. to 7 a.m. — you can either adjust those start and end times or pick the “Sunset to Sunrise” option that will automatically turn it off and on based on what times those things occur. So it’ll change throughout the year, which is pretty nice.

You have another switch that will let you just turn Night Shift off and on manually, and hitting it will keep the feature running until your designated end time.

The final setting lets you adjust exactly how “warm” (read: orange-ish) you want your screen to be. You can adjust the slider from “kind of warm” to “really quite warm,” and you’ll get a preview of how it will look.

If scheduling isn’t your thing, and you’d rather turn Night Shift off and on manually, Apple also added a switch to the Control Center. Just swipe up from the bottom of the screen and tap the middle button between the Clock and the Calculator.

Night Shift is available in iOS 9.3 for iPhone 5s and all 6 models, iPad Pro, iPad Air 1 and 2, iPad mini 2 or later, and the 6th-generation iPod touch.