Apple is set to reveal how much money it made over the 2015 holiday shopping season, and per usual, it’s expected to be a record-breaker.

Tim Cook and Luca Maestri will dive into all the details of Apple’s Q1 2016 earnings report tomorrow at 2 p.m. Pacific but there’s really only one number Wall Street really wants to know: total iPhones sales. Even though Apple may record its highest earnings ever, some analysts are predicting that iPhone sales may have declined for the first time, which could send Apple’s stock price sinking.

Here are six things to watch for during Apple’s Q1 2016 earnings call:

Apple shatters a couple records pretty much every earnings report but this holiday quarter the company is going after a monstrous number: $18 billion.

If Apple manages to top $18 billion, it would be the most profit ever made in one quarter by a company. The record is currently held by Fannie Mae, which posted $18 billion in profit during the last quarter of 2013. 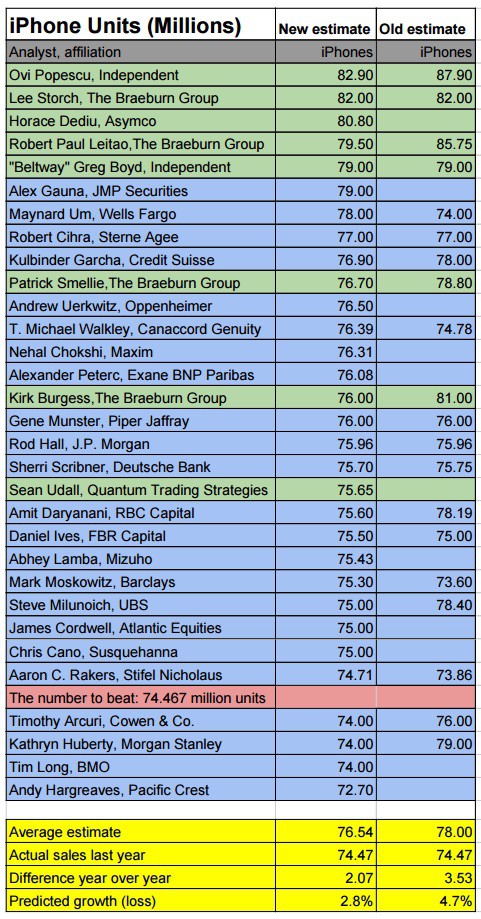 Many top Apple analysts are predicting that iPhone sales may decline for the first time ever.

Fortune’s quarterly poll of analysts found that, on average, Wall Street is hoping Apple will hit 76.5 million iPhone sales. That would be slightly up from the 74.5 million units sold during the same quarter last year. However, with iPhone suppliers in Asia reporting lower component orders, some analysts are anxious to see if Apple will actually hit that mark.

Any number above 77 million will make investors crap their pants with joy. But if sales go below 75 million, we expect AAPL shares to start slipping.

About 6 million Apple Watches were likely sold during the device’s first five months, but sales may have been even better during the last quarter thanks to Apple Watch being one of the hottest gifts of the holidays.

It’s no secret that the iPad has been struggling lately. Sales have declined since 2014 and it looks like the iPad Pro might not be enough to reverse the trend. iPad mini 4 and iPad Pro sales appear to have been better than expected, but analysts still predict sales will decline to around 18 million units sold, down from the 21.4 million units sold in the same period last year.

We’ll have to wait for Google’s parent company, Alphabet, to report earnings on February 1, but the Apple rival could overthrow the iPhone-maker as the world’s most valuable company by next week.

Google is within striking distance of overtaking Apple in market capitalization, even though the company is nowhere close when it comes to revenue and profits. If iPhone sales slip, Google could easily take over the lead if it adds $47 billion to its cap — which is definitely possible, considering it added $60 billion in one day last year.

Apple has never been more dependent on iPhone sales to drive its growth. Now that mature markets are saturated with smartphone users, though, the company needs to make deeper inroads in China and India to keep the sales machine pumping.

China is about to open its 33rd Apple Store, but with the country’s economy starting to slow down, Apple could certainly use another major developing nation to gobble up iPhones like candy. That’s where India comes in.

Apple posted record sales in India during the last quarter of 2015, but it’s looking to make a bigger push than ever with its first official Apple Stores and maybe a new iPhone 5se to appeal to the masses.