Apple’s been known as the world’s most valuable company ever since 2013, but it could soon be overthrown depending on how well its earnings call goes this coming Tuesday.

Alphabet, Google’s new parent company, is within striking distance of overtaking Apple in market cap. Despite Apple having a $47 billion lead over Google, Quartz reports that it’s possible that Apple’s earnings report won’t impress investors enough to help it maintain the top spot when Alphabet’s earnings come in on Feb. 1. 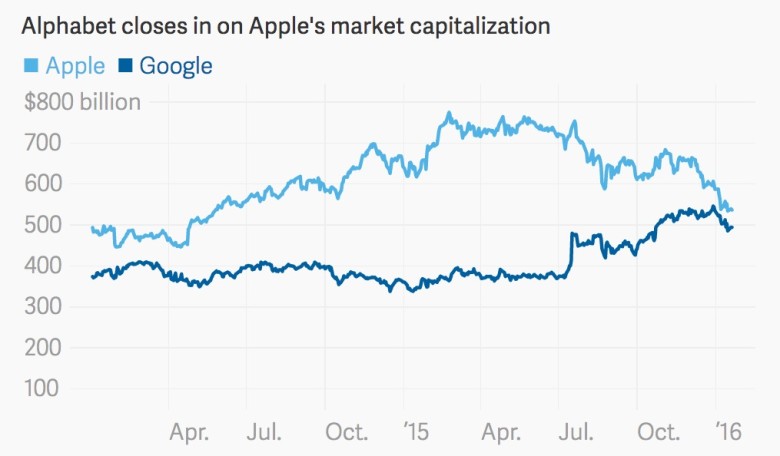 In order for Google to finally beat Apple though it would need the company to miss badly on its Q1 2016 results. That’s pretty unlikely considering it’s Apple’s strongest quarter thanks to holiday sales. If anything, Apple should be able to widen its gap on Google this quarter. AAPL stock is rated as a buy by most analysts, with an average target price of $140. The stock is currently trading at 97.56.

Google making up $47 billion in one day wouldn’t be unprecedented though. Last July the company had one of the best days on Wall Street ever by adding $60 billion to its market cap in one day. Analysts are just as bullish about Google shares (currently trading at 717.02) with estimates hitting an average high of $855.