The enormous iPad Pro has an appropriately huge graphics processor.

A teardown analysis by electronics firm Chipworks has revealed details of the new A9X processor that powers the Apple’s plus-size tablet, including the 12-cluster GPU that’s twice as powerful as the A9 processor found in the iPhone 6s and 6s Plus.

Here’s a closer look at the chip: 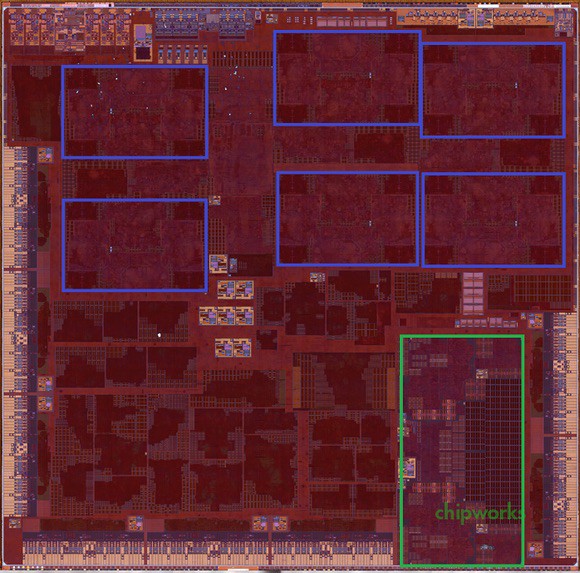 The green box in the image above is the location of the CPU, while each blue box contains two GPU clusters. The A9X contains the same amount of CPU cores as the A9 chip, but Apple ramped up graphics performance by adding six graphics clusters.

One notable omission on the A9X chip is the absence of the L3 cache memory found on the A9 chip. Chipworks explains that Apple may have left it out because the A9X is a very large chip and more difficult and expensive to manufacture. Adding the L3 cache may not have brought enough performance improvement to justify the increased cost.

The A9X has other benefits, though. Its memory interface is twice as wide as the A9, which allows it to pass data twice as quickly. At 147 square millimeters, the A9X is a fantastic engineering achievement. It’s also the second-largest A-series chip Apple’s ever made.