Apple has a solution for that — the $169 Smart Keyboard, which turns the iPad Pro into a laptop lookalike. But there’s a fantastic alternative: Logitech’s Create keyboard and case.

Logitech’s Create has several advantages over Apple’s Smart Keyboard. First, it’s a keyboard and a case that turns the Pro into a proper faux laptop (Apple’s keyboard is half a case that covers only the iPad’s screen). Logitech’s keyboard has fantastic chicklet keys, versus Apple’s hated low-travel flat keys; and it’s backlit, an essential requirement for any keyboard.

All in all, Logitech’s $150 backlit keyboard turns the iPad Pro into a MacBook — but a MacBook with cool extra features like Touch ID and a touch-sensitive screen. 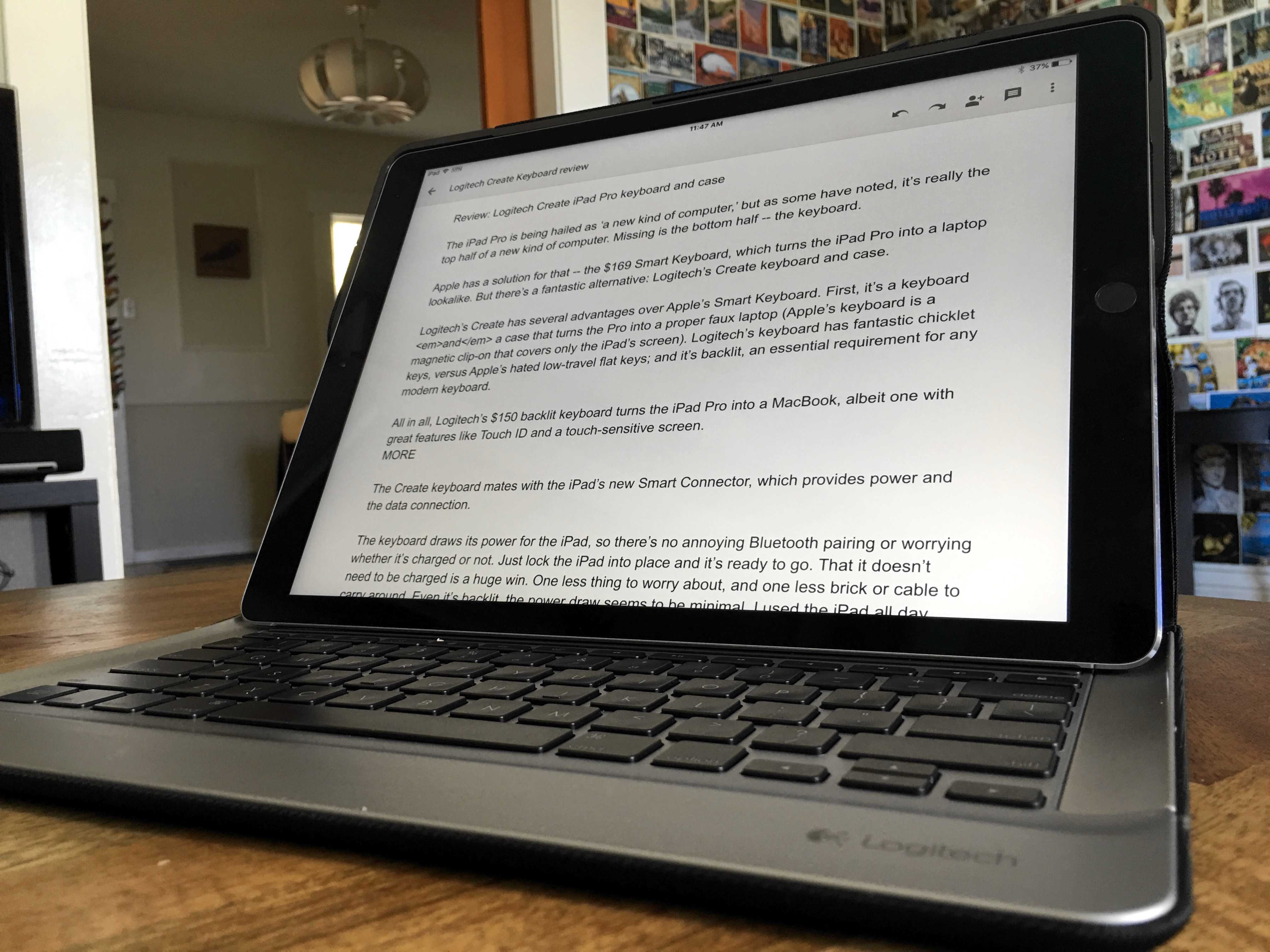 The Create is like an empty laptop shell, and the iPad clips into the lid. With a fabric exterior, it’s well-made and super sturdy. I could probably jump up and down on it without breaking it. It folds up like a laptop, waking up the iPad when it’s opened and shutting it down when it’s closed.

The iPad is docked to the keyboard with a strong magnet. You can pick it up even when it’s opened, and the keyboard stays attached and in position. It’s not flimsy or rickety, which is the way it should be if you’re pounding on it on your lap. In fact, the heft is welcome. Unlike the new ultra-slim MacBook, which is almost too light, it doesn’t dance around in your lap when you’re working on it.

By contrast, the Create is a steady platform for the ginormous iPad Pro. The only downside is that the iPad sits at a fixed angle. It’s not adjustable like a MacBook’s screen, but it doesn’t really matter. I just adjust the angle of the whole thing, keyboard and all. I find it easy to type on my lap, or lying in bed, or on a tabletop.

All in all, it’s so much like using a MacBook that I kept reaching for the trackpad that isn’t there. It’s taken a while to retrain myself to reach for the screen instead. 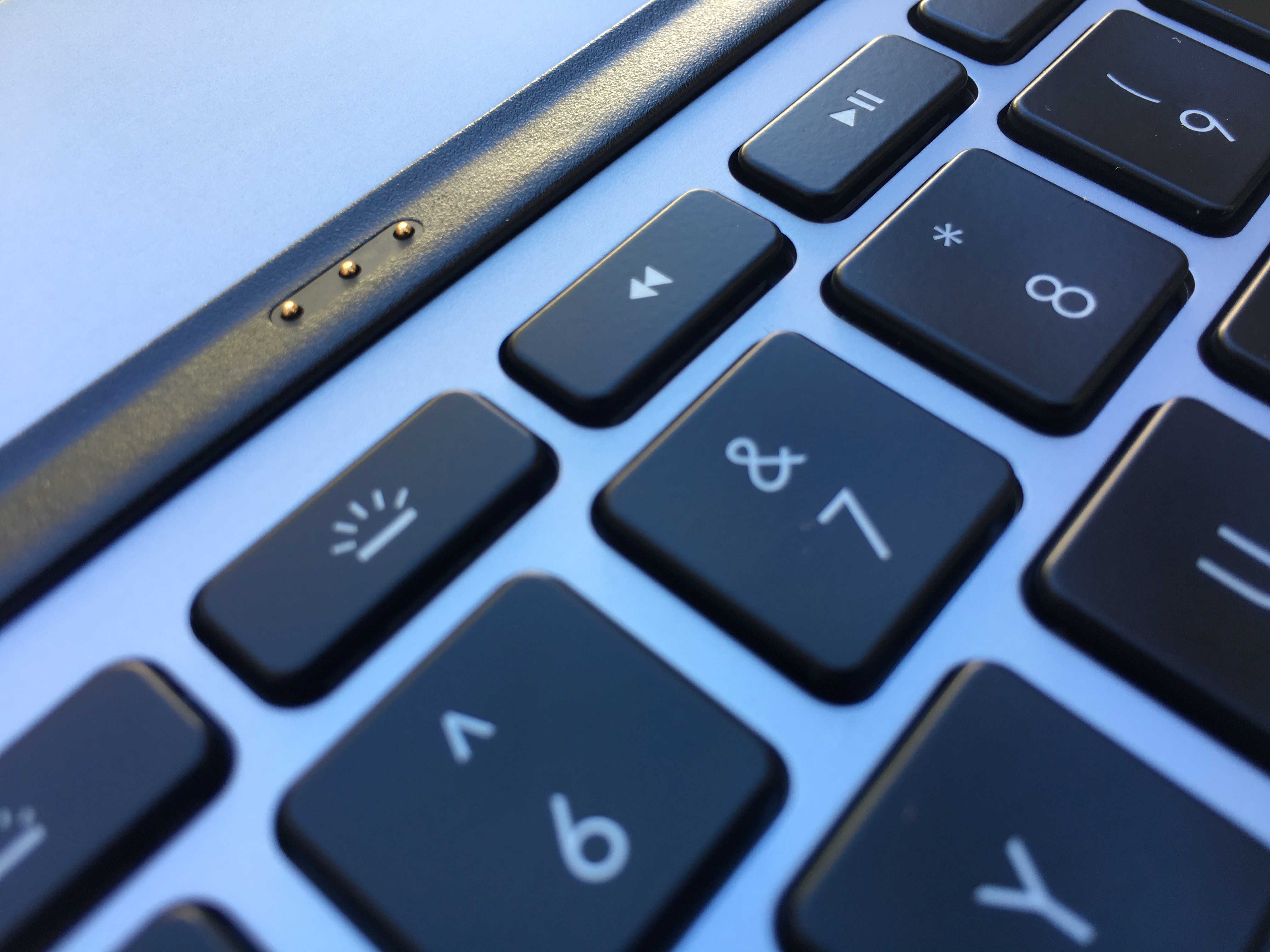 For power, the keyboard connects to the iPad’s new Smart Connector, which provides juice and a data interface.

Thanks to the Smart Connector, there’s no Bluetooth pairing or worrying whether the keyboard is charged or not. Just lock the iPad into place and it’s ready to go. The fact it doesn’t need to be charged is a big win. It’s one less thing to worry about, and one less brick or cable to carry around. And it seems to sip power, even though it’s backlit. I’ve been using the iPad and keyboard all day and easily got the iPad’s full rated 10 hours of use. 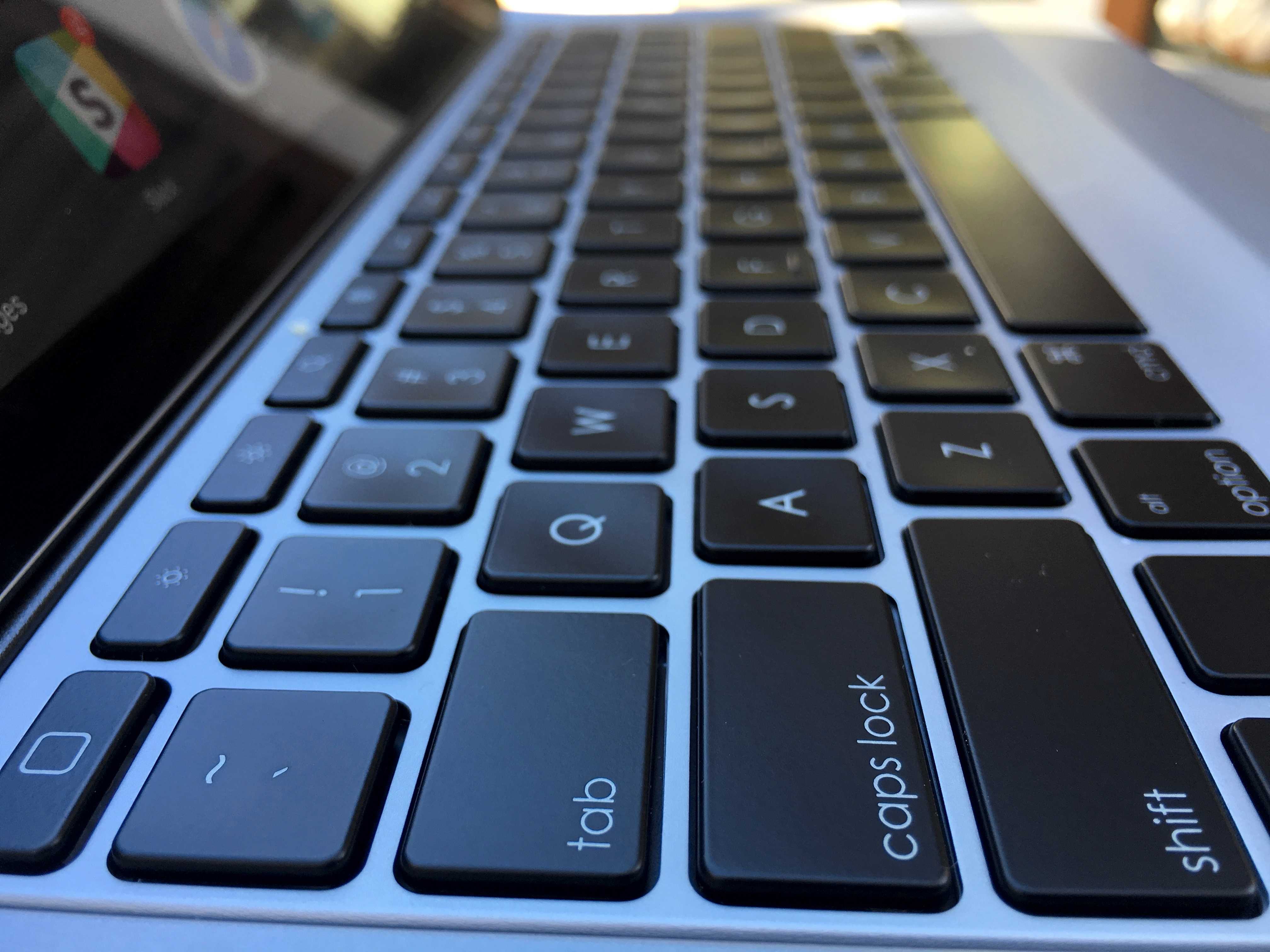 The Create keyboard has lovely chicklet keys, which unfortunatley seem to be getting phased out at Apple. Both the new MacBook and the iPad Pro’s Smart Keyboard have low-travel keys, which lots of reviews hate. I’ve kinda gotten used to them on the MacBook, but I admit, I love Chiclet keyboards.

Backlighting on a keyboard is essential in my book, especially on a laptop. Unlit keyboards seem incomplete, broken. The Create’s backlighting is great. It lights up as soon as you hit a key and it’s good and bright. If prefered, it can be adjusted to a dimmer setting.

Accross the top of the keyboard there’s a nice set of 14 iOS  function keys. There’s a Home button that jumps to the Home screen; screen brightness up and down; keyboard brightness (toggles between high and low); and media controls — play, fast forward and rewind.

There’s also sound controls and a Lock button. Best is the dedicated Search key which brings up Spotlight search. With the search enhancements in iOS 9, search is the best way to navigate an iPad. You can search across multiple apps and services, as well as the Web. Need to open an app? Just type the first letter or two, and it pops right up. No need to swipe through endless Home screens looking for an elusive icon. Search results bring up contacts, email messages, music and the web. In fact, the search screen should really be the iPad’s Home Screen — the default starting place for all tasks, but that’s another story.

There’s also a key for launching alternative keyboards. The default is the Emoji keyboard, but it can be set for things like other languages.

The Create keyboard comes in a range of colors. I got black and space grey, but I wish I’d gotten the red and gold keyboard and a gold iPad, which looks slicker than snot. There’s also a white and blue keyboard case to match the silver iPad. 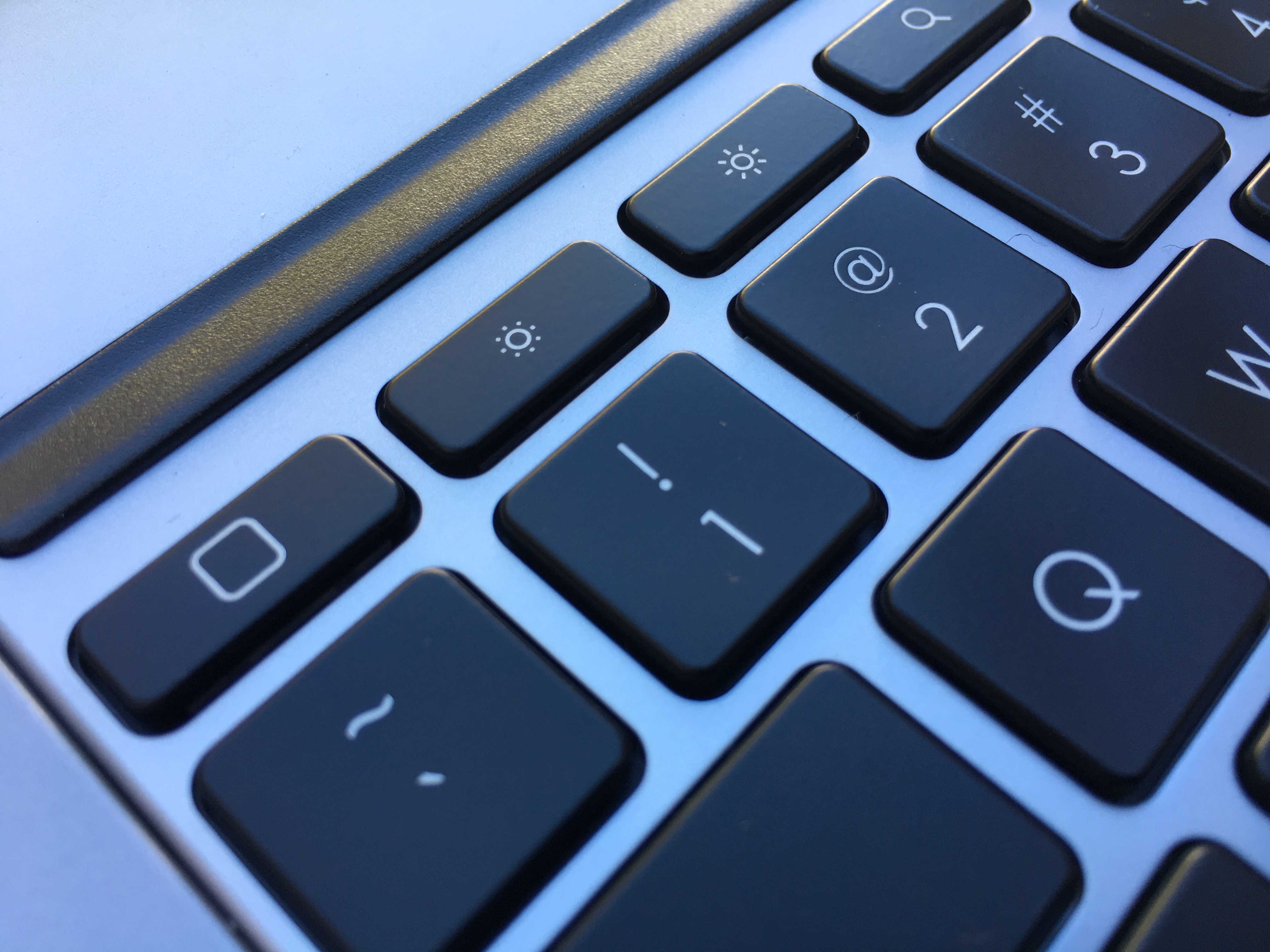 The Create costs $150, which is pretty pricey for a keyboard and case. But consider that Apple’s Smart Keyboard is $169 and Apple’s silicon case (to protect the back) is $69. So although $150 for a case/keyboard isn’t sandwich money, it’s almost $100 cheaper than Apple’s options, and it’s arguably better.

It’s also pretty hefty. The Create almost triples the thickness of the bare iPad Pro and doubles the weight. The volume buttons are maddening. There are cutouts for the camera, Lightning port and speakers, but not the physical volume buttons. You have to manipulate them through overlays built into the case, and it requires a ridiculous amount of force. But it’s small beans. There are after all, dedicated volume buttons on the keyboard.

It’s hefty and it’s not cheap, but overall, a keyboard like the Create is an essential addition to the iPad if you’re going to replace your laptop. Again, essential. It’s the missing bottom half of the new kind of computer.