Siri has a few extremely scientific and mathematical costume suggestions for Saturday’s festivities, but good luck figuring out how to implement most of them.

You can get prompts from Apple’s digital assistant by asking, “What should I be for Halloween?” to your favorite iOS device. Siri’s ideas aren’t bad if you can find a way to make them work. Check out a few of them below, which we captured from an Apple Watch.

The puns are pretty great, as is Siri’s failure to understand what makes Halloween so special. I mean, I eat candy all the time, and someone once told me that I dress like a teenager at 34, so I’m right there with Apple’s AI assistant. But the October holiday is also great because crappy horror movies are on all the time, and you can join your friends in enjoying and/or making fun of them.

So that’s the true meaning of Halloween, Siri.

It’s possible people spend as much time finding new and ridiculous ways to interact with Siri as they do actually using the assistant for its intended purpose, but that’s part of the fun. Sure, you can just use Siri to set alarms or control your magical lights, but you can also ask for jokes, beg for hints about Apple events or ask what time it is even though you know damn well that you’re talking to a watch.

But if you want some real, solid advice, just keep asking for Halloween costume suggestions, and eventually Siri will drop this gem: 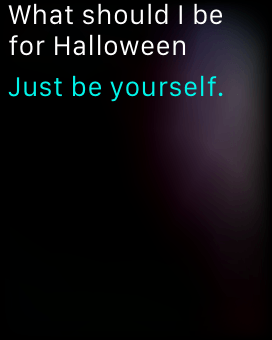 And that’s just cute. Unless, of course, it means you don’t need a costume because you look enough like a terrifying monster just as you are. And if that’s the case, that’s just ice-cold, disembodied robot voice in my phone.