The public release of iOS 9 got off to a rocky start yesterday but it appears that Apple’s problematic servers didn’t stop the big software update from gaining faster adoption in the first 18 hours than iOS 8.

Even though iPhone and iPad users are downloading iOS 9 at a slightly faster rate than they installed iOS 8, the number crunchers at TapyJoy found that iOS 9 is still lagging way behind iOS 7’s adoption rate.

Check out the race in the comparison chart below: 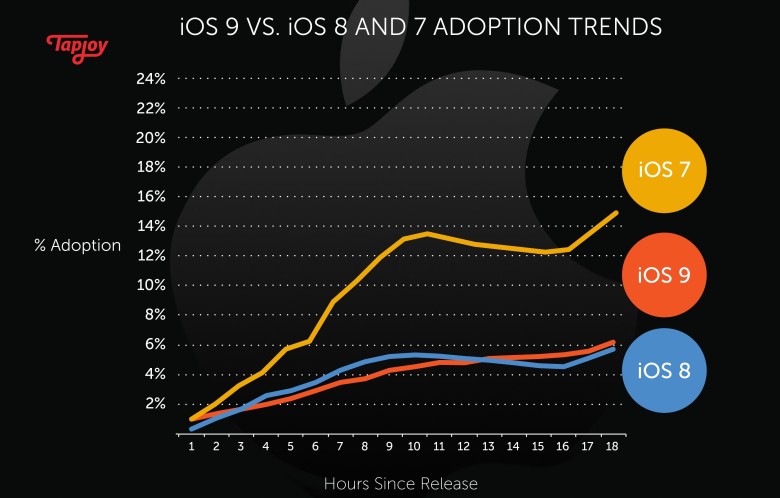 According to metrics taken from Tapjoy’s mobile platform, iOS 9’s adoption rate stands at 6% just 18 hours after its release, however iOS 7 was at 12% after 18 hours. Measurements from Mixpanel show a slightly different story with iOS 9 adoption at 10% of the users base 18 hours into the release.

iPhone users have been quicker to adopt iOS 9, with 7% making the upgrade since yesterday, compared to 4% of iPad users, even though iOS 9 has a bunch of new features that make the iPad a much better productivity machine. iOS 9’s adoption also varies greatly between major countries, with Japan and South Korea being the fastest to update so far, while the China, Italy and the United Kingdom round out the top 5.