iOS 8 is about to join the big tech scrapyard in the sky, but before it’s replaced by iOS 9, Apple has posted one last set of adoption figure — showing that a whopping 87 percent of eligible users upgraded to Apple’s last-generation mobile OS. 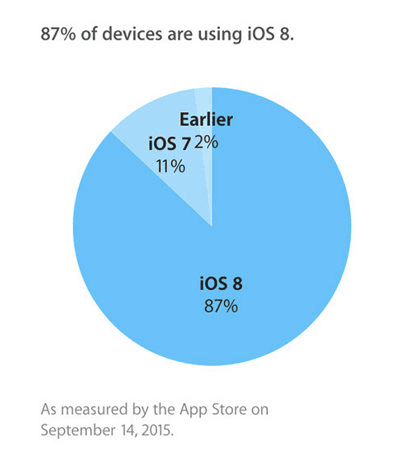 During the same period, iOS 7 had 11 percent of customers still using it, while earlier iOS versions account for a minuscule 2 percent of users. Apple gathered its data from visits to the App Store on September 14.

In all, it’s not a bad showing at all for iOS 8, which has consistently lagged behind iOS 7 in terms of adoption — despite the record number of iPhones Apple has sold during the past year.

The final figures attained by iOS 8 are about in line with what we expected. Back in July, I wrote that, “If Apple’s lucky, it will hit 87 percent before iOS 9.”

Needless to say, it’s also worlds better than anything Android is managing. According to Google’s latest developer figures, Android’s KitKat version — released in September 2013 — has the highest adoption rate among Fandroids. That number? A dismal 39.2 percent.

As for how iOS 9 will do when it officially launches later today, mobile app intelligence platform Crittercism predicts that it will do slightly worse at first, with 31 percent adoption by the end of week 1, compared to 35 percent for iOS 8. However, the analytics company thinks iOS 9 will hit 50 percent adoption by day 25, which is 3 days faster than iOS 8 managed.

As an Android comparison, they also predict that iOS 9 will hit 20 percent adoption by Sunday, which would put it equal to Android’s current mobile platform Lollipop when it comes to adoption. As Crittercism notes, “This means iOS 9 will take four days to accomplish what has taken Lollilop 11 months.”