Music tips from guy who made Steve Jobs dance [Cult of Mac Magazine 333]
Today in Apple history: Sun Microsystems almost buys Apple
Save more than half off a new iPad mini 3 [Deals]
Add rad text captions to your Instagram photos without an app
Take a deeply discounted dive into iOS development [Deals]
Apple Arcade’s Butter Royale is a Fortnite-like food fight
These gorgeous cases wrap your AirPods Pro in luxury leather
Palm-size pillows will have you dreaming about that first Mac
Broadcom lands $15 billion deal with Apple to sell it iPhone components
Why everyone’s upset about AirPods Pro, and Tim Cook’s favorite shower tech, this week on The CultCast

We’re less than one month away from the iPhone 6s being announced, and carriers are tripping over themselves and each other trying to offer the best terms for customer upgrades.

The latest carrier to throw its name in the ring is Sprint, which has just launched its new iPhone Forever plan, which lets users upgrade to the latest iPhone any time they want — without having to pay an upfront fee or experience a hike in rates.

Instead, Sprint asks customers to pay a monthly surplus fee on top of their regular service plan, which then lets them upgrade to the latest iPhone at the drop of a hat.

These prices are part of a Sprint introductory, which expires next year, so sign up now if you want to. Here’s how the deal compares to other carriers for the 16GB base model: 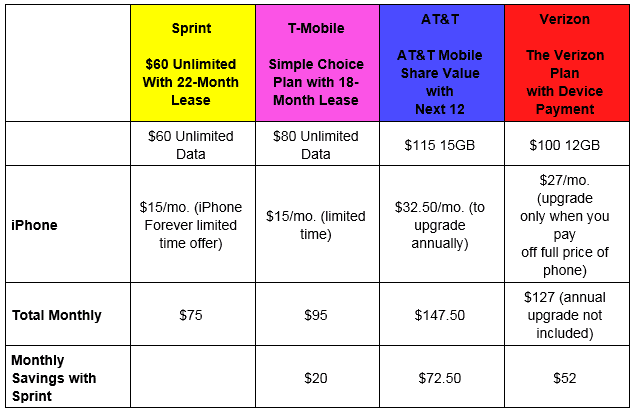 As to whether or not this will result in savings, it all depends what it is that you’re after. The deal is best value for the base iPhone 16GB model, although it gets less valuable the higher up the spec list you go.

Ultimately, though, it’s great to see Sprint’s battle with T-Mobile yield such good results for customers. At the end of the day, that’s probably the most important thing of all. Yay for capitalism!