“I’m leaving” is a message I probably send way too often, but not as often as “I’m here.” It’s just become routine whenever I’m making plans or picking someone up. It’s not necessarily a burden, but it’d be a nice luxury to be able to quickly send friends these repeat messages automatically to save a little bit of time. You’re smart so I bet you know where I’m going with this.

Yes, Written is a new app for iPhone that lets you write out five of your most commonly used phrases and save them for easy access in Notification Center. Then when you pull down the Today view from the top, you see the Written widget with your five messages. Tap one to send it along to your favorite contacts. It works with the Messages app and even WhatsApp.

It’s especially useful when you have to use your iPhone one-handed and typing becomes a tad more tedious. Just swipe down, tap the message, tap the contact and hit Send. (Plus, your pesky friends are just using you for your good looks anyway. They don’t deserve your undivided attention. Just spew something pre-written and keep the day moving along.) 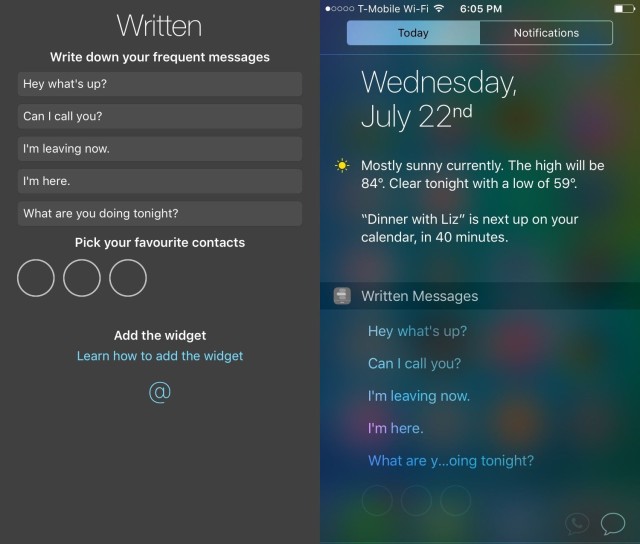 When you open the app you can program those favorite messages and then add three favorite contacts, which appear underneath the messages in Notification Center in tiny circles. The app doesn’t appear to support sending group messages among these people though, but it’s a cool potential idea for the future.

I also wish you could add more than three contacts for easy sending. Maybe I’m just super popular (probably not the case) but I want to be able to send quick messages to maybe five or six contacts as needed. I did learn that you don’t have to choose a contact to send your message with Written though. Just tap the phrase and then hit the chat bubble on the bottom right in the widget to open up the message with a blank recipient area. Of course, this takes extra time and requires a bit typing.

Whether it’s quicker than just asking Siri to send a message for you is questionable. I’d say no, but at least it’s quieter if that means anything to you. That said, it’s oddly reassuring that I can walk out my door, slide down Notification Center, tap “I’m leaving now” and send it off without thinking about it.

If the idea of quickly firing off pre-written messages to friends intrigues you, you can get the relatively new Written for iPhone for $0.99.