Everyone writing about the supposed failure of the Apple Watch may want to check out analyst Ben Bajarin’s latest reporting — suggesting that the Apple Watch has a massive 97 percent satisfaction rate among early adopters.

For those keeping track at home, that’s higher than both the original iPhone (92 percent) and the original iPad (91 percent). In fact, only the current iPhone (99 percent satisfaction) scores higher. 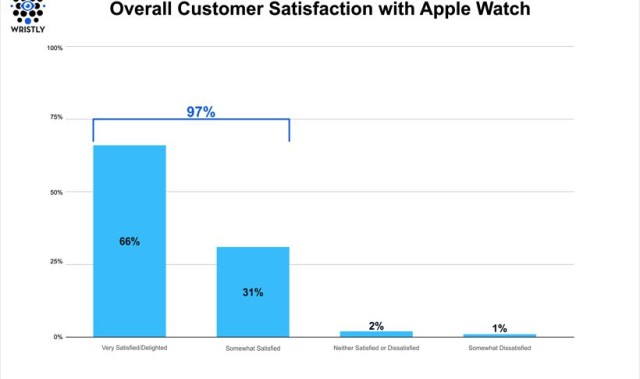 The survey was carried out among 800-plus Apple Watch owners. Of these, 99 percent described themselves as either “very satisfied” or “delighted” with the device, while 31 percent were “somewhat satisfied,” a meagre 2 percent described themselves as “neither satisfied or dissatisfied,” and the remaining 1 percent were “somewhat dissatisfied.”

Although it certainly can’t be classed as the definitive proof of Apple Watch acceptance (sales figures will do that), it’s definitely a strongly contrasting take to the headline-grabbing stories we’ve been hearing from people eager to reveal just how quickly they bought and then returned their Apple Watches.

Interestingly, Bajarin has a theory about the Apple Watch:

“As I listened to different people tell me about their Apple Watch, I observed a pattern. Those whose job it was to think about the Apple Watch or who were early adopters who thought deeply about tech and the tech products they buy, were all much more critical of the watch. You could tell they evaluated it and thought about it deeply from every angle by their responses. Then I talked with teachers, firefighters, insurance agents, and those not in the tech industry and not hard-core techies. These groups of people couldn’t stop raving about the Apple Watch and how much they loved the product. It was almost as if the farther away people were from tech or the tech industry, the more they liked the Apple Watch.”

On one level it makes sense that people who use technology a lot (and may therefore have tried non-Apple Watch smartwatches) would be most critical of the device.

However, it’s promising news for Apple that the device seems to be resonating with the average person on the street, since these are the customers who will have to shell out for the device if Apple hopes to have its next mass-market device on its hands.