Developers have been busy combing through the first iOS 9 beta for clues about upcoming Apple services, but in the lastest iOS 8.4 beta that was also seeded to developers earlier this week, the first signs of the Apple Music streaming service have started popping up (literally).

Some iOS 8.4 beta testers have received pop-up notifications in the old Music app. The introductory prompts reveal how Apple plans to get iOS users to sign up for the new service, either on an individual plan or family plan.

Here’s signup screen users will be greeted by: 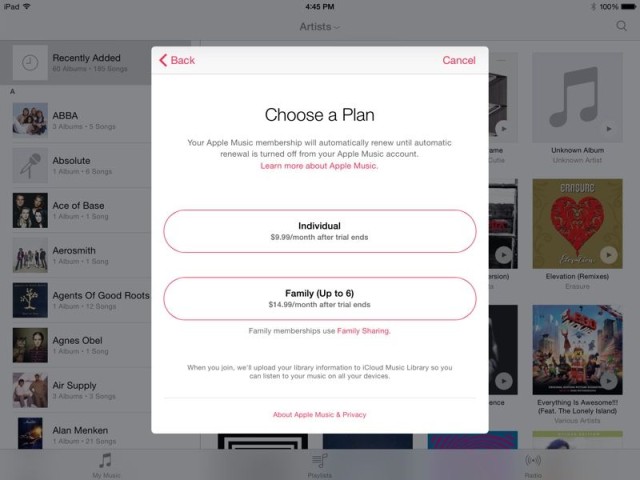 Not all iOS 8.4 beta testers are seeing the prompts in the Music app, but MacRumors reports that when opening up the Music app, some users are prompted to start their free three month trial of Apple Music, even though the service won’t be available until June 30th.

Tapping on the Apple Music intro pop-up takes you to another screen that lets users select between the $10 per month individual plan or $15 per month family plan, but there’s no way to actually signup. Once you tap on a plan right now the option just grays out.

Apple announced at WWDC that the new Apple Music service will launch on June 30th in over 100 countries, providing full streaming access to the entire iTunes catalog, plus Beats 1 radio and Apple Connect. While Beats 1 and some aspects of Connect will be available to all users for free, streaming will only be available to paid subscribers. To see if Apple Music is launching in your country, check out our full map.