The tech world is eagerly awaiting the arrival of the Apple Watch and Siri, it seems, isn’t any different. With the launch of Apple’s debut wearable just a month away, the iOS virtual assistant is apparently just as obsessed with the device as we are — as a simple “What are you doing now, Siri?” question will attest.

Check out some of the amusingly geeky responses below.

Siri has a number of preprogrammed Apple Watch-related Easter eggs, such as, “Just helping cast ingots and compress billets and blast zirconia beads for the Apple Watch. Ingots and billets and beads, oh my!”

The quips are fun, but they also highlight just how far Apple thinks it is ahead of the smartwatch game with its upcoming device. (The attitude is also obvious in the sly dig at competitors featured in just about every Apple Watch ad to date.) 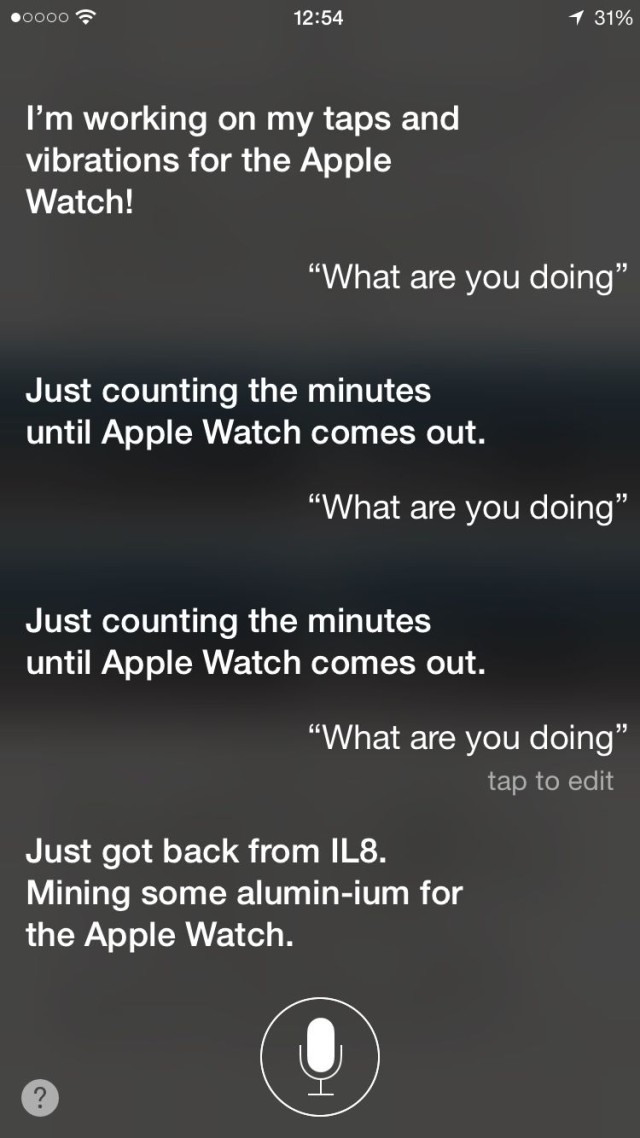 
Another quip claims Siri was “just with the Apple metallurgy team, discussing the durability of ice-nine” (a reference to a fictitious material that threatens to destroy life on Earth in Kurt Vonnegut’s novel Cat’s Cradle).

There’s even an amusing swipe at Jony Ive’s British pronunciation of “aluminium” with Siri saying that he/she, “Just got back from IL8[,] mining some alumin-ium for the Apple Watch.”

This isn’t the first time Apple has included amusingly geeky hidden references in Siri. Ask Apple’s virtual assistant about robot movies, for example, and you’ll get some amusing takes on sci-fi classics.

For instance, Stanley Kubrick’s 2001: A Space Odyssey is, in reality, about a Siri-style virtual assistant which goes out of control and murders a large proportion of its crew. According to Siri, however, it’s about “an assistant named HAL who tries to make contact with a higher intelligence. These two guys get in the way and mess it all up.”

Siri can also clue you in on some actually useful Apple Watch deets, such as the release date of the device. Hey, at least the two aren’t feuding any more…