The recent New Yorker profile of Jony Ive revealed how he was the driving force behind the Apple Watch, and how he felt the “the obvious and right place” for wearable tech was the wrist — and not the face, as Google tried with its Google Glass project.

In the same story, Tim Cook offered his dim appraisal of Glass, saying that, “We always thought that glasses were not a smart move, from a point of view that people would not really want to wear them. They were intrusive, instead of pushing technology to the background, as we’ve always believed.”

While the two disses may read like potshots at an Apple rival, a patent published today reveals that — yes — Apple has indeed tried virtual reality goggles, roughly three years before settling on the Apple Watch form factor. Here’s what it came up with.

Specifically, the patent describes a head-mounted display that would work by enclosing an iPhone into a separate head-up device, thereby turning the iPhone display into a makeshift virtual reality unit. The device would be able to display 3-D content by splitting the display into two image frames — one targeting the left eye, one targeting the right eye — to create the illusion of depth through what is called stereoscopic imaging

For those familiar with the virtual reality efforts of other companies, this is exactly what Samsung opted to do with its Samsung Gear VR headset — created in association with Oculus Rift — which it released in December 2014. 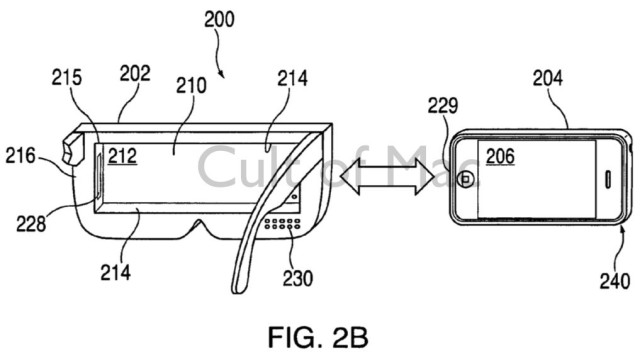 Interestingly, given that Apple’s patent was filed in 2008, several years before Siri was introduced, its claims note that, “the head-mounted system can utilise a microphone on one or both of the head mounted device and portable electronic device to detect and identify voice commands that can be used to control the portable electronic device.” Like Google Glass, it could also activate the rear-facing camera on the iPhone to record images and video.

This isn’t the first time Apple has dabbled in virtual reality. The company has been exploring this territory since 2006, before the iPhone or Oculus Rift were known to the general public. You can see Cult of Mac’s summary of Apple VR-related patents here.

Of course, given Jony Ive’s apparent distaste for headsets it may be a while (if ever) until we see one ship. But today’s published patent demonstrates that Ive and Tim Cook weren’t just throwing out Google Glass criticisms without having done their homework first.