Thanks to a groundbreaking deal between Marvel Studios and Sony Pictures, we’re finally about to see Spider-Man rejoin his Marvel brethren Captain America and Iron Man as part of the Marvel Cinematic Universe.

But having sat through a disappointingly botched reboot, how best should everyone’s favorite web-slinger be used? Forget about another tired origin story; 50 years of Spider-Man comics have given filmmakers plenty of great stories should they choose to adapt them–stories like the ones we’re about to suggest.

Without further ado, then, here are Cult of Mac’s picks for the Spider-Man comic arcs we’d love to see spun up on the big screen. Swing out past the jump for more details: 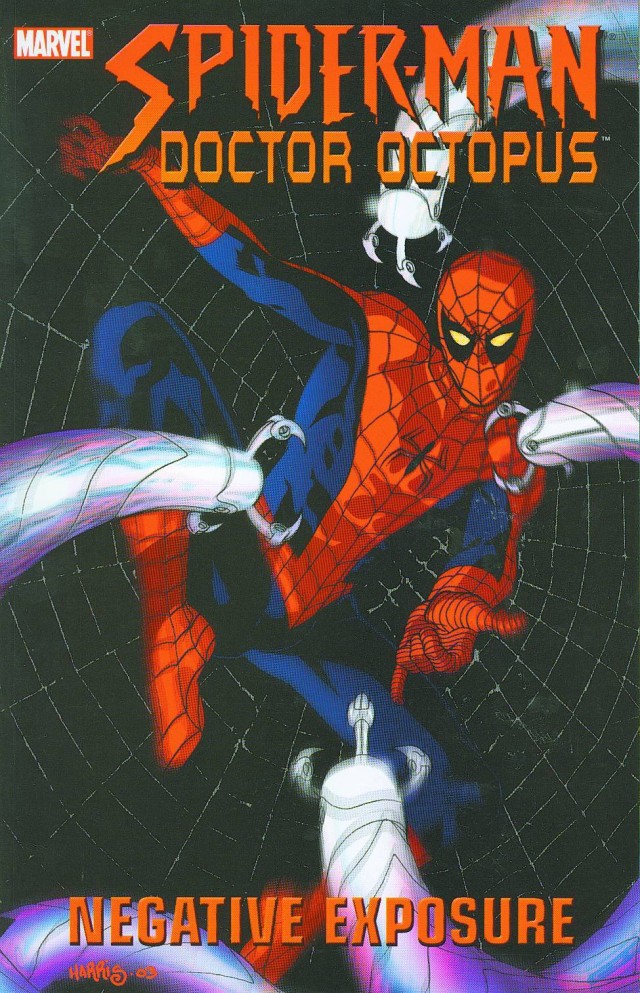 Great comic writers can take the characters we’re familiar with and add a unique twist that makes us think about them differently. So it is with Brian K. Vaughan’s “Negative Exposure” storyline. We’re so used to thinking of Peter Parker as the perennial underdog that it takes a writer of Vaughan’s caliber to make us think about and take pity on Parker’s photographic rivals, who often see their own work downgraded because of Parker’s spectacular snaps of Spider-Man.

Daily Bugle photographer Jeffrey Haight is one of these rivals, who so desperately wants to make the paper’s front page that he teams up with a more-vicious-than-usual Dr. Octopus to make his dream a reality. All in all, a fantastic Spidey vs. Doc Ock storyline, which done right could even displace the excellent Spider-Man 2 as the best version of the villain we’ve yet seen on-screen. 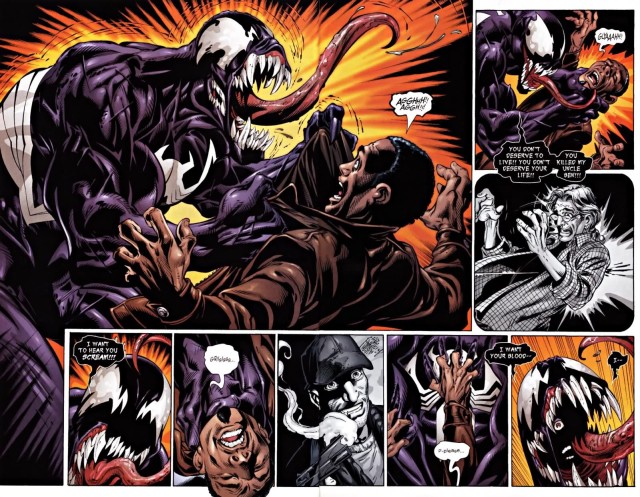 I’ll defend Sam Raimi’s Spider-Man 3, mainly because it seems to get tarred with the Batman & Robin brush of being the worst thing that ever happened to superhero movies. But its treatment of Venom was pretty damn abysmal, even given that Venom’s inclusion was a studio demand, essentially wasting a character who has become one of the relatively few iconic characters of the modern Spider-Man era.

My pick for a great Venom story? The Ultimate Spider-Man arc, which played out in #33-39 of the comic. By making Eddie Brock a part of Peter Parker’s childhood, writer Brian Michael Bendis added an element of pathos to a character that had previously lacked it. And, hey, we’re happy to take a Venom solo movie while we’re at it. 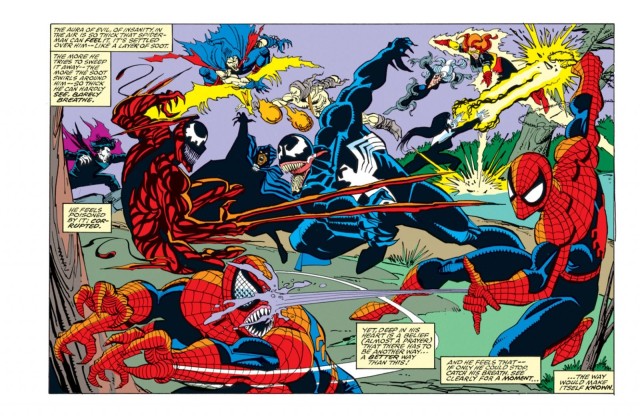 I grew up on 1990s comics, so I realize that I’m disproportionately in favor of massive, multi-part blockbuster comics than people a bit older (and maybe younger) than myself. With that said, “Maximum Carnage” was a fantastic story, which saw Spider-Man and Venom team up to take out the far more vicious Carnage symbiote.

There were appearances from supporting characters like Black Cat, Cloak, Dagger, Deathlok, Morbius, Captain America and others, and a giant battle to bring it to a conclusion. Sure, “Maximum Carnage” isn’t as cerebral as some of the other stories on this list, but were it to come at the right time, this would make for an amazing movie. 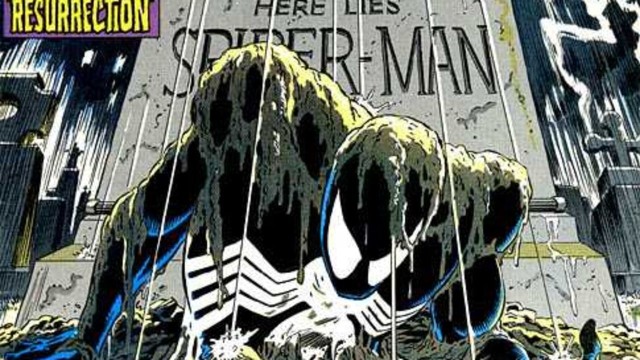 Although it’s sometimes been hinted at, until the 1987 storyline “Kraven’s Last Hunt,” we never really got an answer to the question of what would happen if a super villain defeated their heroic nemesis. In a nutshell, the story is this: Kraven apparently kills Spider-Man after shooting him.

Kraven buries Spidey, then puts on his own Spider-Man costume and becomes a vicious vigilante. Spider-Man is meanwhile revived, and has to reclaim his identity. It’s a dark story, certainly, but it’s also one of the best Spider-Man tales ever. And Marvel has shown itself to be more than capable of approaching more grown-up material with its movies. 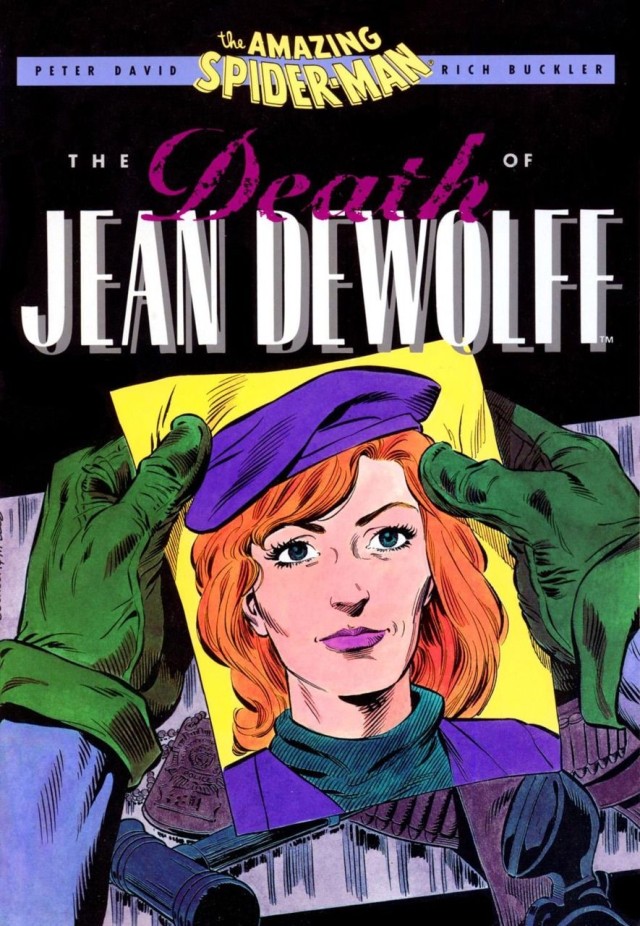 The Death of Jean DeWolff

When a police officer and personal friend of Spider-Man is murdered in her sleep, Spider-Man crosses paths with Matt Murdock en route to finding the killer. Unlike many of the comic’s more superpower-based antagonists, the villainous Sin-Eater is essentially a regular joe (albeit a psychopathic one, armed with a double-barrelled shotgun), which gives the story more of a real-world base.

Spider-Man meets Se7en, with Daredevil thrown in for good measure? Yep, we’re on board for that one — particularly if the character of Jean DeWolff can be introduced in previous movies. 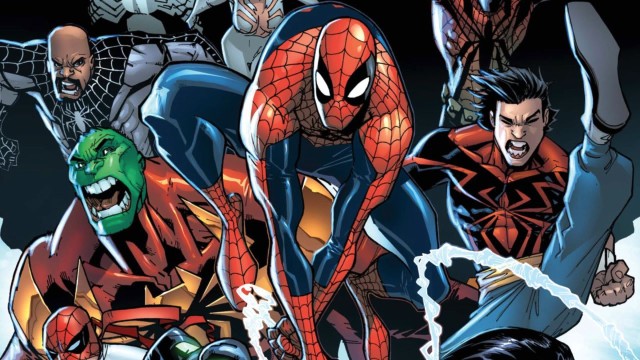 One of the core components of Spider-Man’s mythos is that he’s the only person with the powers (and therefore the responsibility) to do what he does. But what if everyone in New York also possessed similar abilities?

That’s the idea behind 2011’s “Spider-Island” story arc, in which the inhabitants of Manhattan Island are mysteriously granted Spider-Man-like powers. What follows is a great tale involving a variety of outside characters such as Iron Fist, Heroes for Hire, and Spider-Woman. Done right, this could easily be a crossover of Avengers-proportions.

There’s one more idea for a Spider-Man comic that I’d love to see adapted for the big screen—and it’s one that, most likely, would requite considerable rewriting of many of the others on this list. As comic fans will know, since 2011, the Ultimate universe has had a new person in the Spidey suit — in the form of half-black, half-Latino teenager Miles Morales. After two back-to-back movie origin series, we’re sick to the back teeth of Peter Parker’s early days.

One solution? Take Parker out of the series altogether. Sure, there are some people out there who would complain about the status quo being shaken up, but Morales has become incredibly popular in the comics, and there’s absolutely no reason the same wouldn’t happen on the big screen.

In any event, it would save us from yet another Uncle Ben death scene, am I right?