Although the iMac generated a whole lot of buzz for Apple upon Steve Jobs’ return in the late 1990s, it was the debut of the iPod in October 2001 that truly dispatched Apple on its path to astronomical levels of success: a path it hasn’t strayed from in the near decade-and-a-half since then.

Which is why it’s kind of sad to realize that on Apple’s most recent quarterly filing, the “little MP3 player that could” has been unceremoniously shuffled (get it?) into the “Other Products” category, along with such “hobby” project as Apple TV.

To be fair, Apple had warned everyone this would happen back in October 2014, but seeing the iPod no longer mentioned with Apple’s flagship products is a reminder of how the once mighty have fallen — and how much Apple’s core business has changed since the millennium. 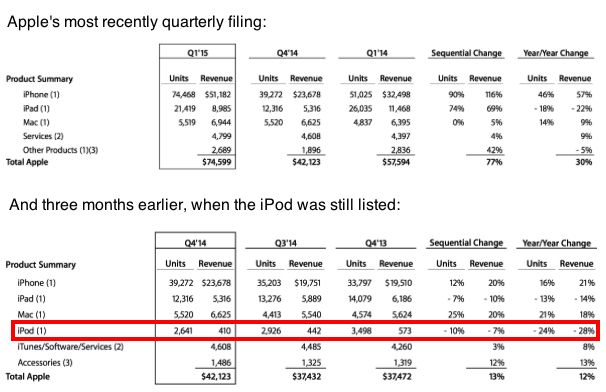 As noted, this isn’t a total surprise for anyone. iPod sales have been falling for years, as more and more people listen to music on their iPhones. For teenagers today (which is how old I was when the iPod was unveiled) a monochromatic LCD screen, five gigs of storage, and a mechanical click wheel most likely look like the sort of thing that should be behind glass in a natural history museum.

Apple removed the iPod Classic from its line of products back in September last year — ironically prompting a bit of a resurgence of interest on eBay and elsewhere. Tim Cook blamed the demise of the product on the fact that Apple “couldn’t get the parts anywhere on earth,” and it wasn’t practical to design a new one.

You can check out our illustrated history of the iPod here.