One of the great things about the world of fitness trackers post-Apple Watch (or, at least, post-Apple Watch announcement) is that we’re seeing how different companies are trying to insure themselves against Cupertino’s high-end luxury lifestyle tracker.

Jawbone recently answered this question by launching its UP Move: It’s an entry-level fitness wearable that may lack the bells and whistles of the Apple Watch, but is also, at $49.99, shy a couple of zeroes in the price tag department. 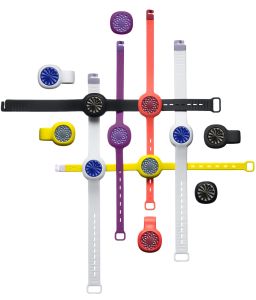 Still trying to figure out just what it is that I’m looking for in a fitness tracker, I’ve been trying out the UP Move for a few weeks now — using it to track not only the number of steps I take each day, but also the calories I consume (particularly useful at this time of year) and how much sleep I get. My verdict so far? Color me impressed.

In terms of design, the UP Move is simplicity itself, with a round design reminiscent of the more-expensive Jawbone Shine, only with a segmented, ribbed design that, on my version, looks like a flower or a grapefruit chopped in half.

There is no screen display. Instead, what you get are a series of hidden LED lights, arranged in a circle around the face, that illuminate rhythmically to illustrate how far along you are with certain tasks. You can also press the face to log certain activities, start stopwatches or check whether the device is awake or asleep.

Tap once to show your step progress, twice to show the time and three times to show sleep data from the previous night. It’s a neat concept, which reminds me quite a bit of the iPod’s click wheel in terms of squeezing functionality out of a relatively straightforward idea.

A wearable has to be, well, wearable — and the UP Move offers you more choice than most. It can be clipped into a plain rubber wristband (sold separately for $15) and worn like a watch or it can be attached to your clothing — be it your jeans, shirt pocket or anywhere else. I’ve tried the clip in a variety of locations, but most recently I’ve taken to wearing it on the wrist I don’t wear my watch on.

If there’s a downside to the design, it’s the surprising fact that the UP Move isn’t waterproof, which means swimming while wearing it is a no-go. It is water-resistant, which means you don’t need to worry about wearing it in the rain or possibly even the shower, but it seems a missed opportunity not to make a device like this a bit more rugged and indestructible.

“The battery life is a definite winner.”

The battery life is a definite winner. The UP Move is in a different class from higher-end smartwatches, but if you’re keen on using both for tracking fitness it’s a worthy comparison. While many wearables (including the Apple Watch) require daily charging, the UP Move has a single-cell battery lasting six months.

It’s not rechargeable, but it’s cheap and easy to replace, and there’s an obvious advantage to having a wearable that doesn’t need nightly charging — not least because the UP Move is capable of monitoring your sleep.

The strongest element of the Jawbone UP Move is its software. Jawbone is rightly proud of its ecosystem of software, and the UP Move works seamlessly with an accompanying iPhone app by way of data sent from the device using a built-in Bluetooth sensor.

Using Bluetooth can drain the battery of your iPhone faster than normal, but this wasn’t prohibitive on my iPhone 6 Plus, which already has a battery that can comfortably last a couple of days without charging.

The app boasts the food-logging, sleep-quantifying and step-measuring functionality you’d expect from Jawbone, but its best feature is the Smart Coach tool, which puts your activity in context over a period of time and provides you with handy tips based on the intensity of your training.

All in all, the UP Move is definitely a welcome addition to the fitness wearable ecosystem.

It’s cheap and lightweight. And while it doesn’t offer some of the advanced sensors of its more expensive siblings (sleep, for example, is divided into just “light” and “deep”), it’s still the best entry-level device I’ve come across.

If you’re on the fence about wearables, have a limited budget or don’t want any functionality beyond fitness tracking, I’d heartily give it my recommendation.

Now I just need to keep wearing it to help shed those post-Christmas pounds!