Apple’s splash into home automation with addition of HomeKit to iOS 8 is expected to have a huge impact on sales of smart home devices in 2015 according to a Park Associates report that found 37% of U.S. households plan to purchase one or more devices next year.

The rising popularity in smart home device sales has been aided by both Apple and Google introducing new solutions in 2014. The research firm discovered retailers are getting ready for smart home devices to hit the mainstream by expanding shelf space for items like Nest thermometers, Philips Hue bulbs, smart door locks and other items.

“Best Buy in particular is devoting over 800 square feet in some locations to its connected home initiative. The entry of big brands like Apple, Google, and Honeywell is also increasing consumer awareness and making smart home devices popular as gifts.”

Apple began its push into the smart home market by allowing developers to use the HomeKit framework in iOS to control smart accessories in the home. HomeKit lets iOS device users to discover, configure and control accessories, as well as use Siri to trigger actions.

Smart thermostats are the most popular smart home purchases right now, accounting for 27% of device sales in the first three quarters of 2014. About 32% of smart devices were bought as gifts in 2013, but Parks and Associates analysts expect the shopping season to push 2014’s final numbers past last year’s mark.

After surveying 10,000 households, the firm found that smart lights will be the most popular purchase in 2014, with programmable thermostats dropping to fourth place now that competing products like smart appliances are becoming popular.

Here’s the full breakdown on what consumers intend to buy next year: 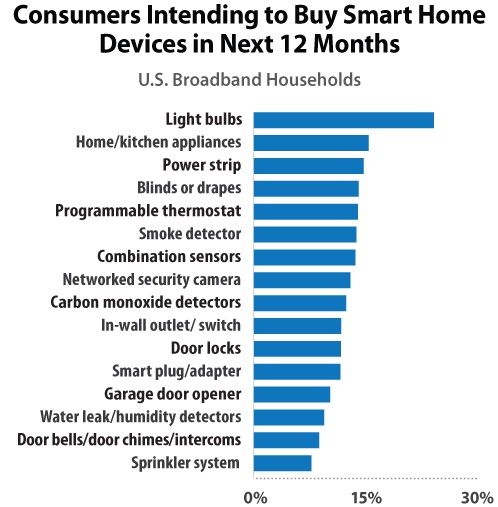