NASA’s spaceship of tomorrow might make a critic of skeuomorphic design cringe.

Orion, which flew successfully on an unmanned test Friday and is seen as a critical first step toward flying a crew to Mars, is guided by sophisticated computer control panels.

But instead of a modern digital interface, NASA designed the controls to look like something from the Gemini missions from the ’60s. Orion’s computer screens are full of virtual flip switches and levers that would put Yuri Gagarin at ease.

It’s a little like Apple putting a virtual rotary dial on an iPhone. 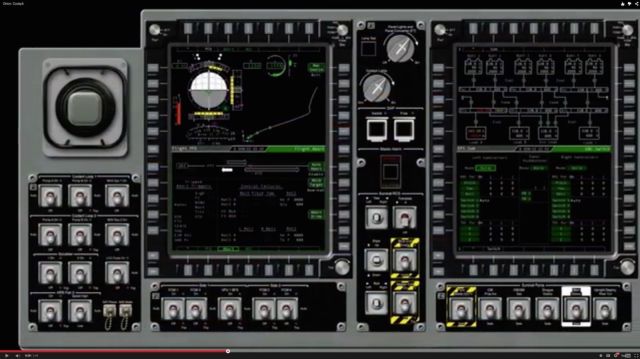 Apple users are familiar with skeuomorphism, a design principle in which elements of the design mimick the look and feel of physical objects, such as a desktop calendar or an old tape deck.

It’s an easy way to introduce users to new digital interfaces: If the new interface looks like a familiar object from the physical world, it’s immediately obvious how it works.

It’s a comfortable reference to the old way of doing things, but critics argue that skeuomorphism is not innovative and puts constraints on a computer’s full capabilities.

Skeuomorphism was one of the favored design principals at Apple until about a year after Steve Jobs’ death. More recently, Apple’s software designers (under the auspices of design head Jony Ive) have begun to shift to cleaner, pure digital designs.

It looks like no one told the programmers at NASA. Orion’s control panels simulate dozens of manual buttons across three screens. That’s a huge improvement on the space shuttle cockpit, which had about 2,000 physical buttons and switches across 10 panels.

NASA calls the new UI a “glass” interface, because the manual controls are simulated on computer screens. However, the Orion control panels are not touchscreens — for good reason, NASA astronaut Lee Morin says in a YouTube video that describes the glass cockpit and user interface.

Objects floating in space could knock against the screen and set off an undesired action, he warns. Also, the controls need to be worked by fingers that are often covered in thick spacesuit gloves.

To operate the glass interface’s virtual buttons and switches, astronauts must rely on a series of edge buttons, which help them to quickly scroll through screens.

On Orion, the number of manual buttons have been reduced to 60, with the remaining controls condensed to three screens.

This means the crew flies a lot lighter. In earlier spacecraft, the weight of all those buttons and switches added up. So did all the wire and supporting circuitry.

“It sounds promising and saves a lot of weight, but designing it is challenging,” said Jeff Fox, the Orion crew systems integration lead, in a NASA news release last year. “We don’t want the crew to have to search through a lot of drop-down menus when they need to quickly access key systems and information.”

The new design also saves a lot of paperwork. Astronauts used to carry 250 pounds of operating manuals. Now, all of that crucial information can be seen on-screen, with only a single manual on how to reboot the computers to be brought onboard.