It’s been over two and a half years since Apple TV was updated, and while Apple’s been happy resting on its laurels, its biggest competitors are passing it by.

Google’s Chromecast is now more popular than Apple TV, reports Parks Associates, which says streaming media players become more popular than ever in the first three quarters of 2014, as 10 percent of U.S. households bought at least one new streaming device. 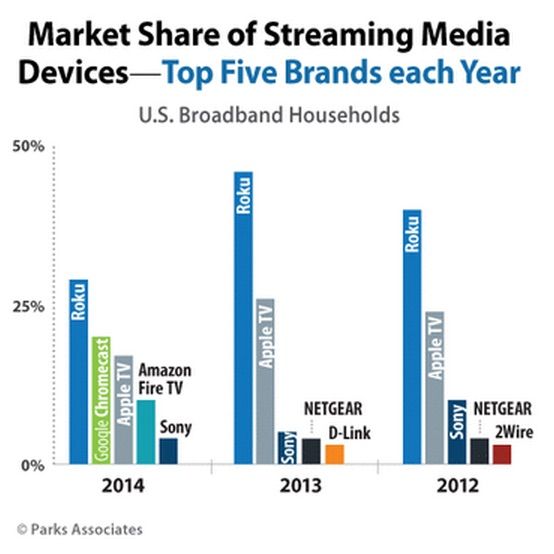 The news of Apple TV’s slumping appeal comes amid years of rumors that a big update is in the works, but Apple hasn’t been able to launch it yet because of negotiation problems with content providers. As Apple’s been satisfied with releasing small software updates to its little TV box, Google and Amazon have launched competitors that offer different content and cheaper prices.

The biggest benefactor in the upswing of set-top box purchases has been Google. Chromecast managed to go from minor player in 2013, to the second most popular device among households with a broadband connection. Roku still sits at the top, but its marketshare shrank significantly over the last 12 months, dropping from 46% last year, to 29% in 2014.

Amazon’s new Fire TV has been quickly gobbling up marketshare too. Fire TV was only announced in April 2014, but Jeff Bezo’s Apple TV replacement has already captured 10% of the market.