Apple is preparing an unprecedented push into the world of enterprise, according to a new report from Reuters. After partnering with IBM in July to develop corporate software and services, Apple is building its own sales team to court clients.

Momentum is strong for Apple in a key market that executives have described as a long-term growth opportunity. New research shows that iOS market share gained in the enterprise sector last quarter while Android slipped.

Besides big names like Citigroup, Apple is reportedly talking with enterprise app distributers about potential partnerships:

The iPhone maker has worked closely with a group of startups, including ServiceMax and PlanGrid, that already specialize in selling apps to corporate America. The two people familiar with the plans, but who could not speak publicly about them, say Apple is already in talks with other mobile enterprise developers to bring them into a more formal partnership. 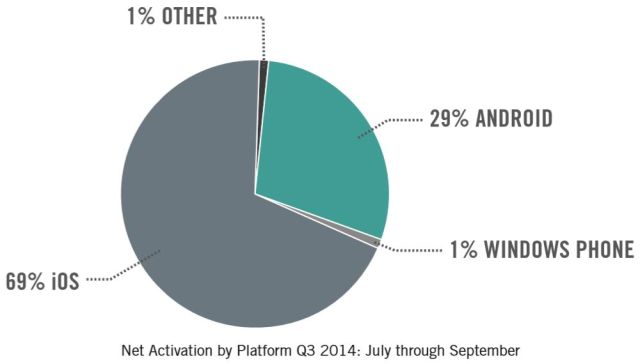 Good Technology‘s latest Mobility Index Report shows that iOS device enterprise activations grew 2% in July through September. Android’s market share fell a corresponding 2%. New iPhone activations were seen as the primarily cause of growth, and the iPad accounted for an overwhelming 89% of tablet activations.

Apple recently launched its AppleCare for Enterprise program, and its first custom client services are expected to start rolling out with IBM’s help before the end of the year.