The iPhone 5s is the number one smartphone in 35 countries around the world, according to new research conducted by Counterpoint Technology Market Research.

Samsung’s Galaxy S5 came in second followed by the S4, Note 3 phablet, and iPhone 5c at fifth place. With larger 4.7 and 5.5-inch iPhones on the horizon, Counterpoint notes that Apple will have another hit on its hands if it goes after the larger-screen smartphone market. 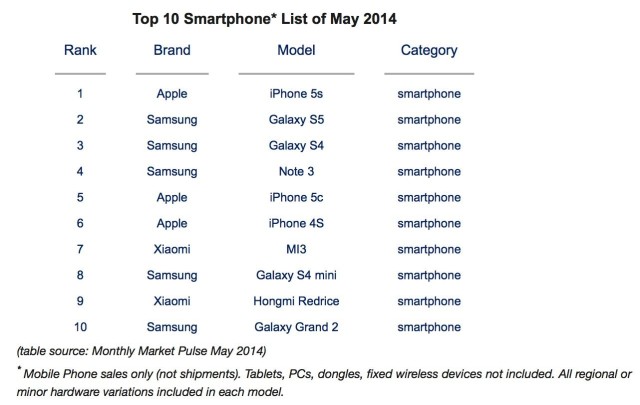 “There are now 3 phablets in the top 10 list which reflects the ongoing trend of larger displays,” according to the report. “Almost 40% of the smartphones sold in May were phablets according to Counterpoint’s channel research across 35 countries. If Apple comes out with a phablet later this year it will instantly become a hit and top the list of phablets within two months of availability.”

While the 4.7-inch iPhone 6 looks on track for release in the fall, noted Apple analyst Ming-Chi Kuo recently said that the 5.5-inch model’s release could be pushed back until closer to Christmas or even 2015 due to production issues.

A recent survey by ComScore found that the iPhone accounts for 42% of users in the U.S, making Apple the top smartphone maker ahead of Samsung with 28%. While today’s Counterpoint report doesn’t share specific numbers, it does note that the Galaxy S5 is a “quite distant number two in terms of (sell through) unit sales.”

The iPhone 5c is unsurprisingly not doing that well for only being on the market since September. It’s sitting at the number five spot just ahead of the ancient iPhone 4s. It will be interesting to see what Apple chooses to do with the 5c come this fall given its relative lack of success and heavy marketing push.