Nest, which is now owned by Google, pioneered the idea of a smart thermostat. Now several years later, Honeywell has a Nest competitor that might actually do well in the consumer market.

Called Lyric, Honeywell’s new WiFi-connected thermostat costs $279 and will be available at a Lowe’s near you by August. While it may be too late for the Lyric to compete with the Nest, Honeywell sees it as just the beginning of its entry into the world of the the smart, always-connected home. And being a launch partner with Apple’s HomeKit in iOS 8 could mean that more people buy the Lyric over Nest in the months to come.

At first glance, the Lyric looks incredibly similar to the Nest’s design, although Honeywell claims there are key differentiators, like an iPod-like click wheel that gives tactile feedback when adjusting the temperature. Another feature called Fine Tine intelligently adjusts the temperature based on the humidity and other weather conditions outside.

There are two buttons on the front of the device. One toggles between a “at home” and “away” preset and the other shows a 12-hour forecast. All of this and more is accessible through the companion mobile app, of course. 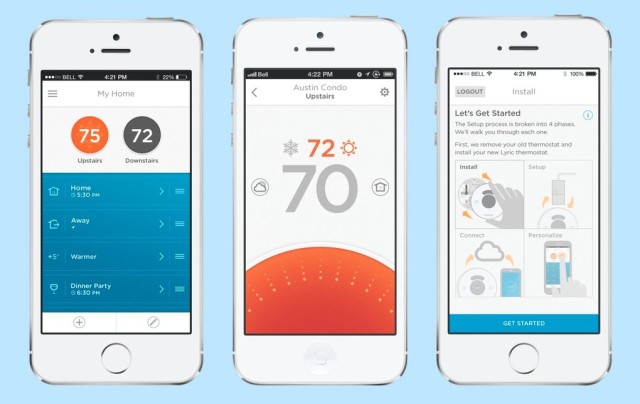 Lyric can establish a geofence that triggers it to adjust the temperature when your iPhone leaves the house. There is an option to set a 500-foot or 7-mile radius, depending on whether you live in a big city or suburban area.

Honeywell is also supporting Apple’s HomeKit platform for developers, which was announced at WWDC last week. That means you’ll be able to tell Siri something like, “I’m going vacation,” and the Lyric will adjust the temperature inside your house for you.

We’ve reached out to Nest for comment on their involvement (or lack-thereof) with HomeKit and will update this article if we receive a reply.

Nest and Honeywell haven’t exactly been friends over the past few years. Honeywell sued Nest for patent infringement back in 2012, and Nest CEO Tony Fadell retaliated by saying that Honeywell was “worse than a patent troll.” Nest struck a licensing deal to protect itself the following year.

Number of comments on this postLeave a comment
Posted in: News Tagged: Google, HomeKit, Honeywell, Nest