iPhones in a pile await their fate at Sims Recycling Solutions' mega-shredder facility in Roseville. Photo: Jim Merithew/Cult of Mac

These printed circuit boards have a date with Sims' mega-shredder. It won't end well for them. Photo: Jim Merithew/Cult of Mac

One of the many sorting areas at Sims Recycling Solutions in Roseville. Photo: Jim Merithew/Cult of Mac

A box of transformers at the Sims Recycling Solutions facility in Roseville, California. Photo: Jim Merithew/Cult of Mac

Pickers watch carefully as a conveyor belt carries an endless stream of electronics components by them. One of their biggest concerns? Inadvertently letting a battery slip by on its way to the mega-shredder. Photo: Jim Merithew/Cult of Mac

The mangled hard drives in this box are destined to be ripped apart by Sims' mega-shredder. Photo: Jim Merithew/Cult of Mac

Time's up for these old credit card readers and other business machines. Photo: Jim Merithew/Cult of Mac 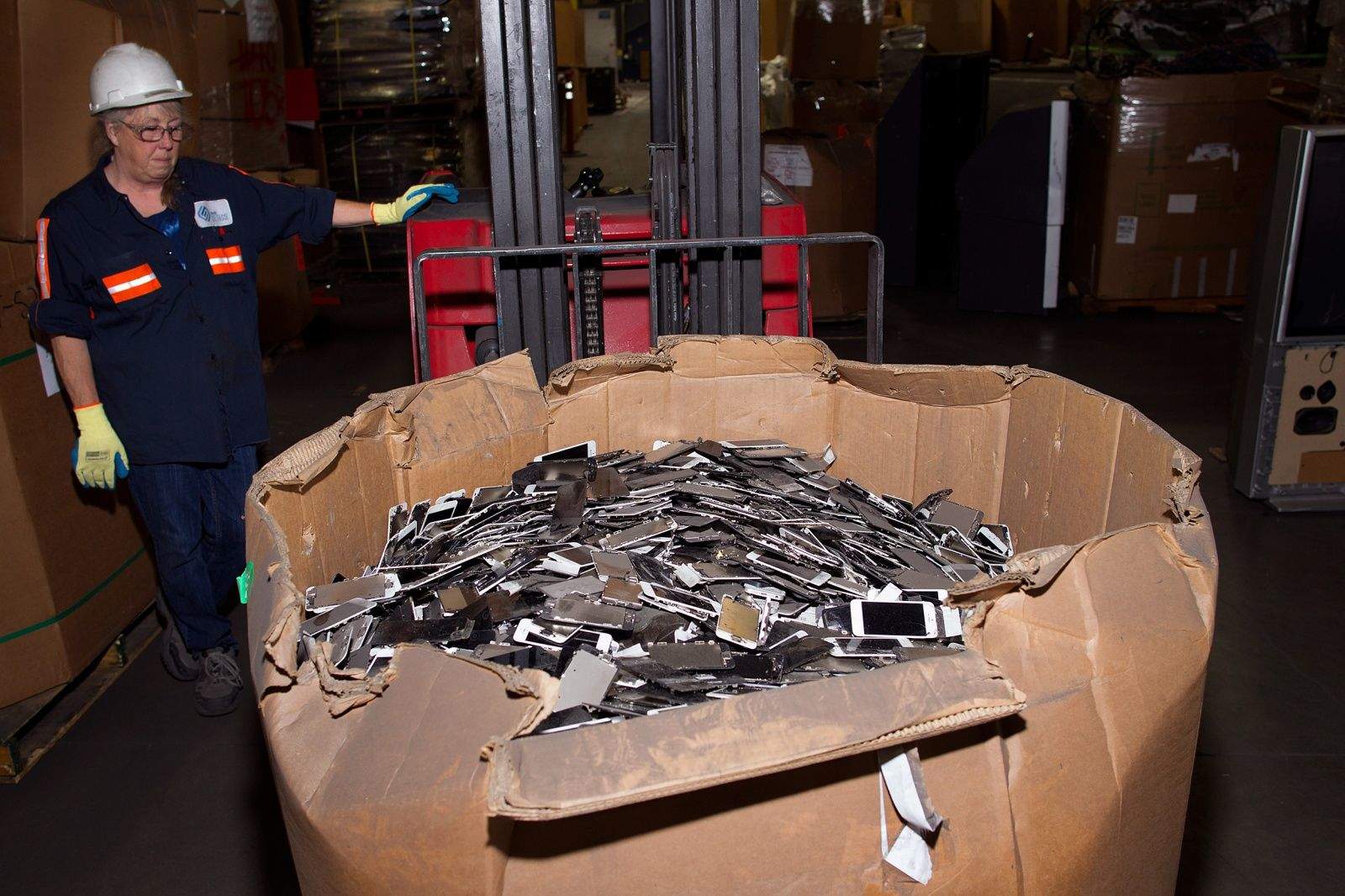 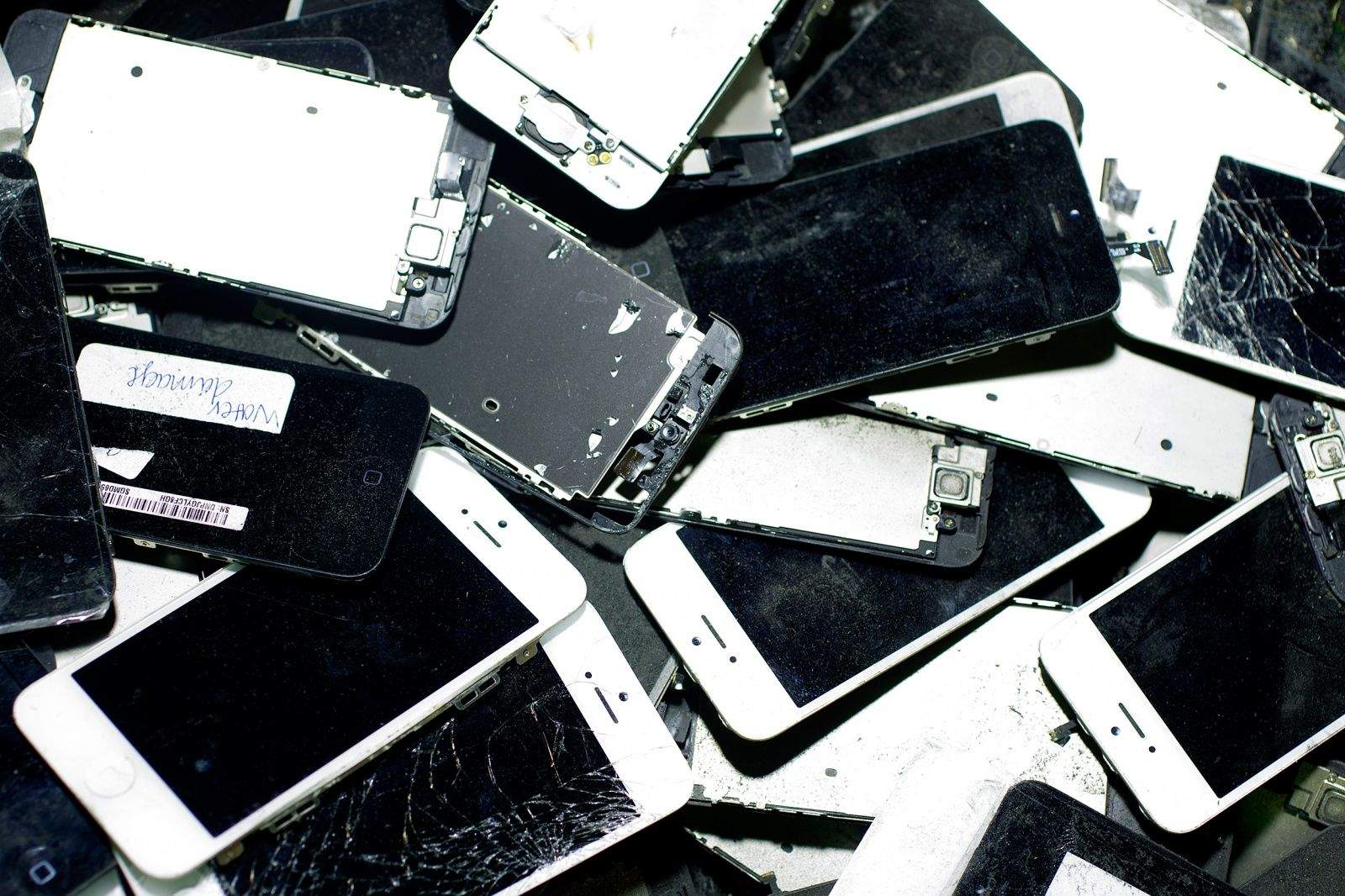 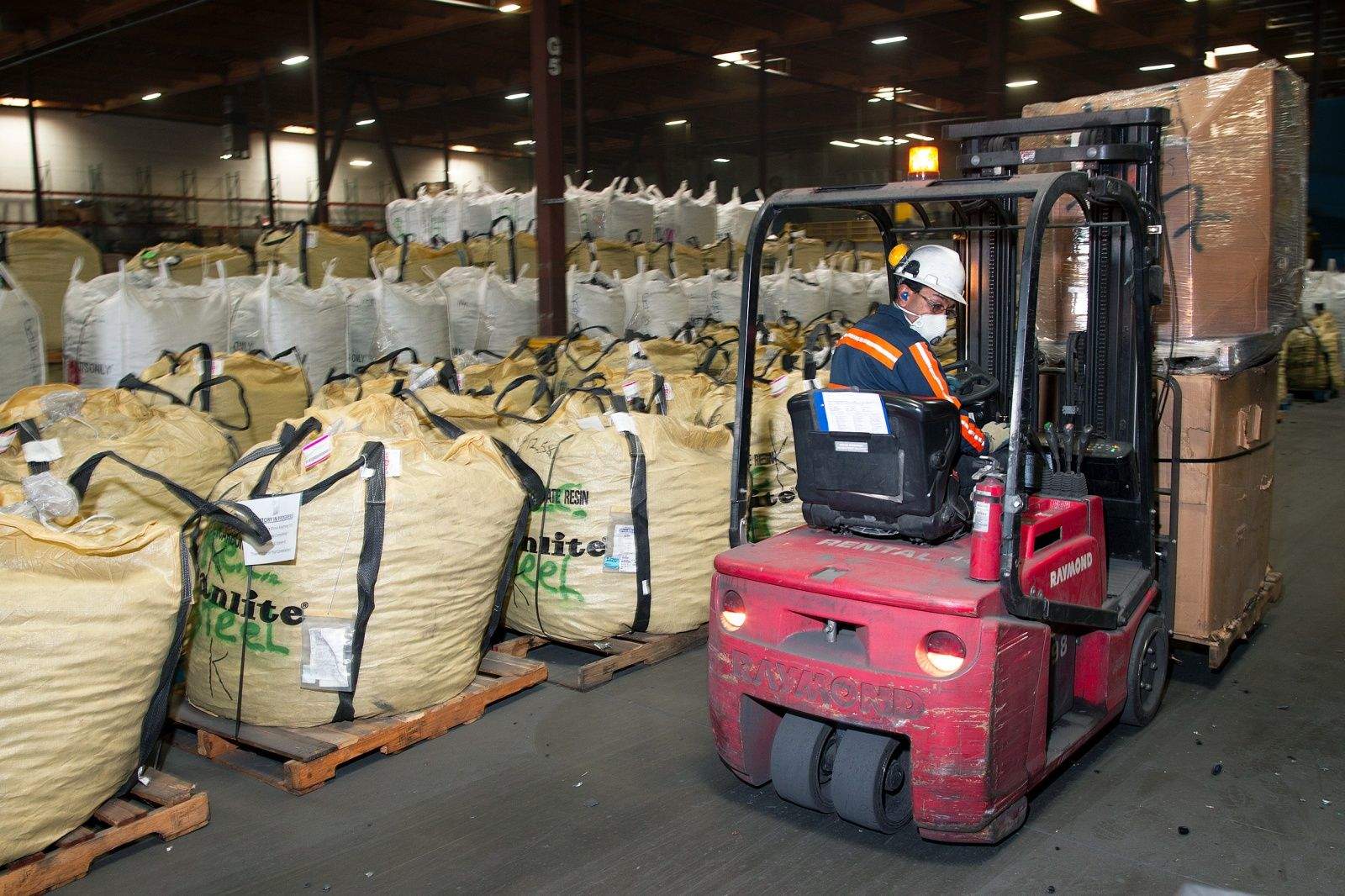 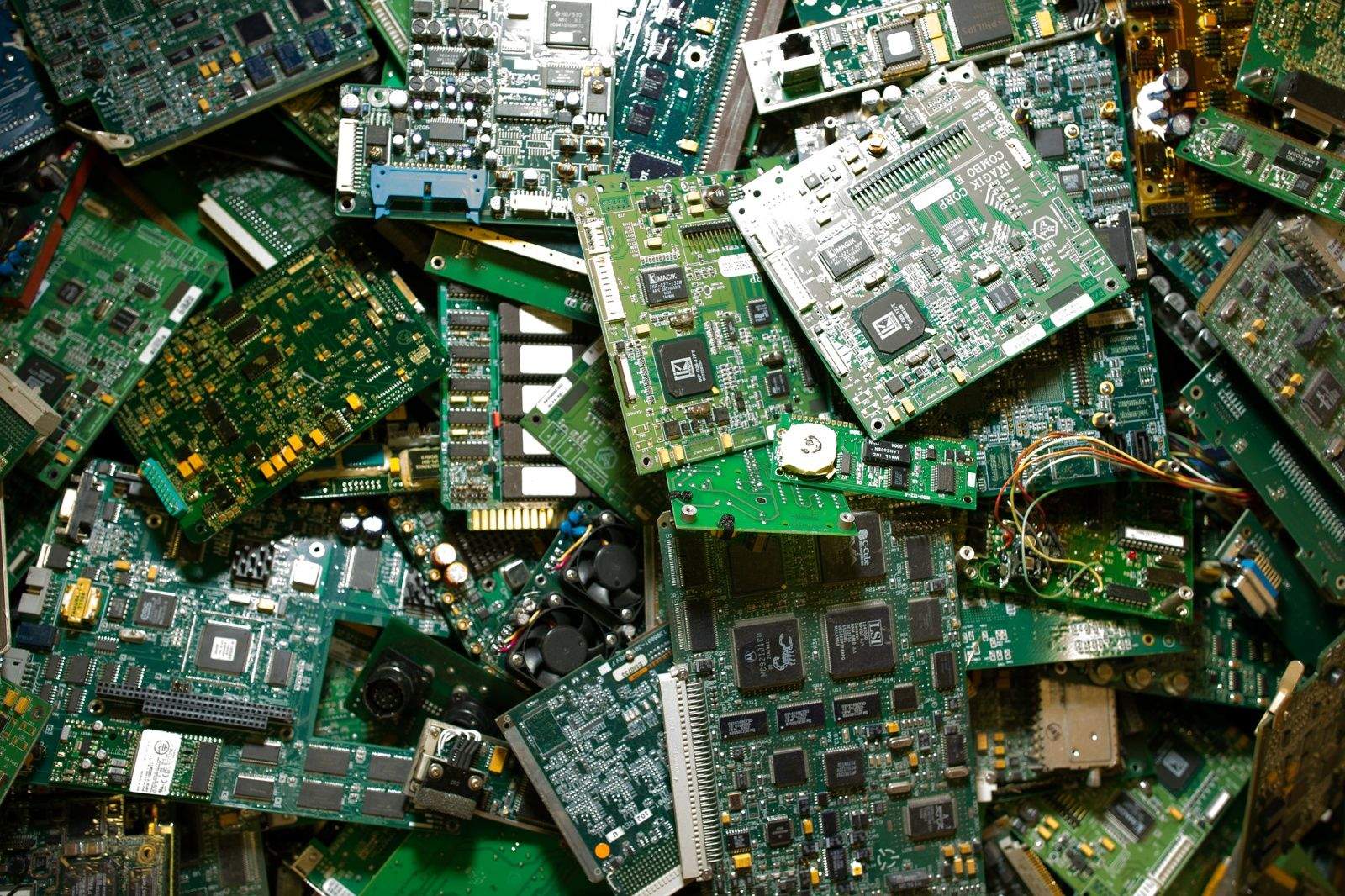 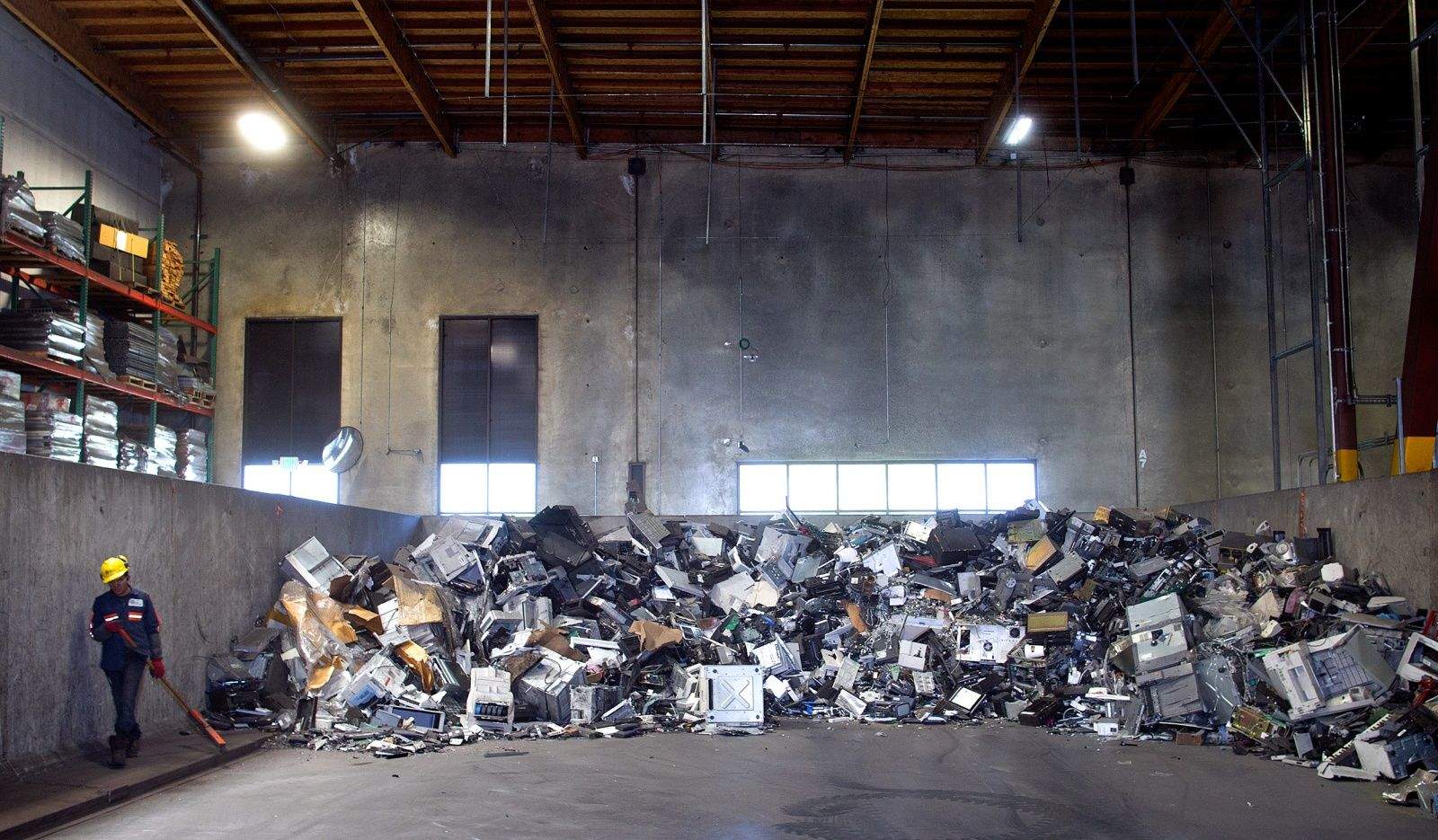 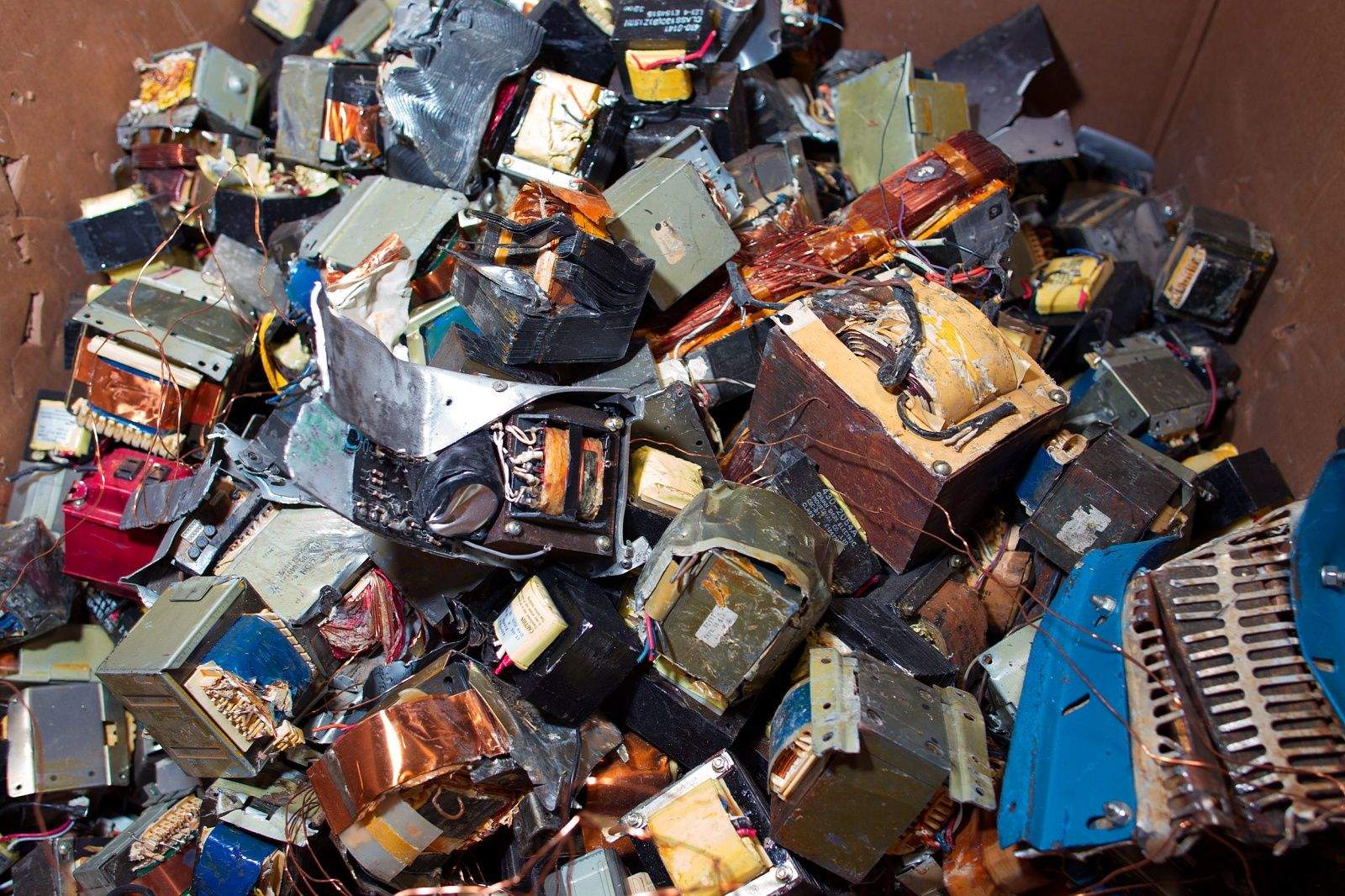 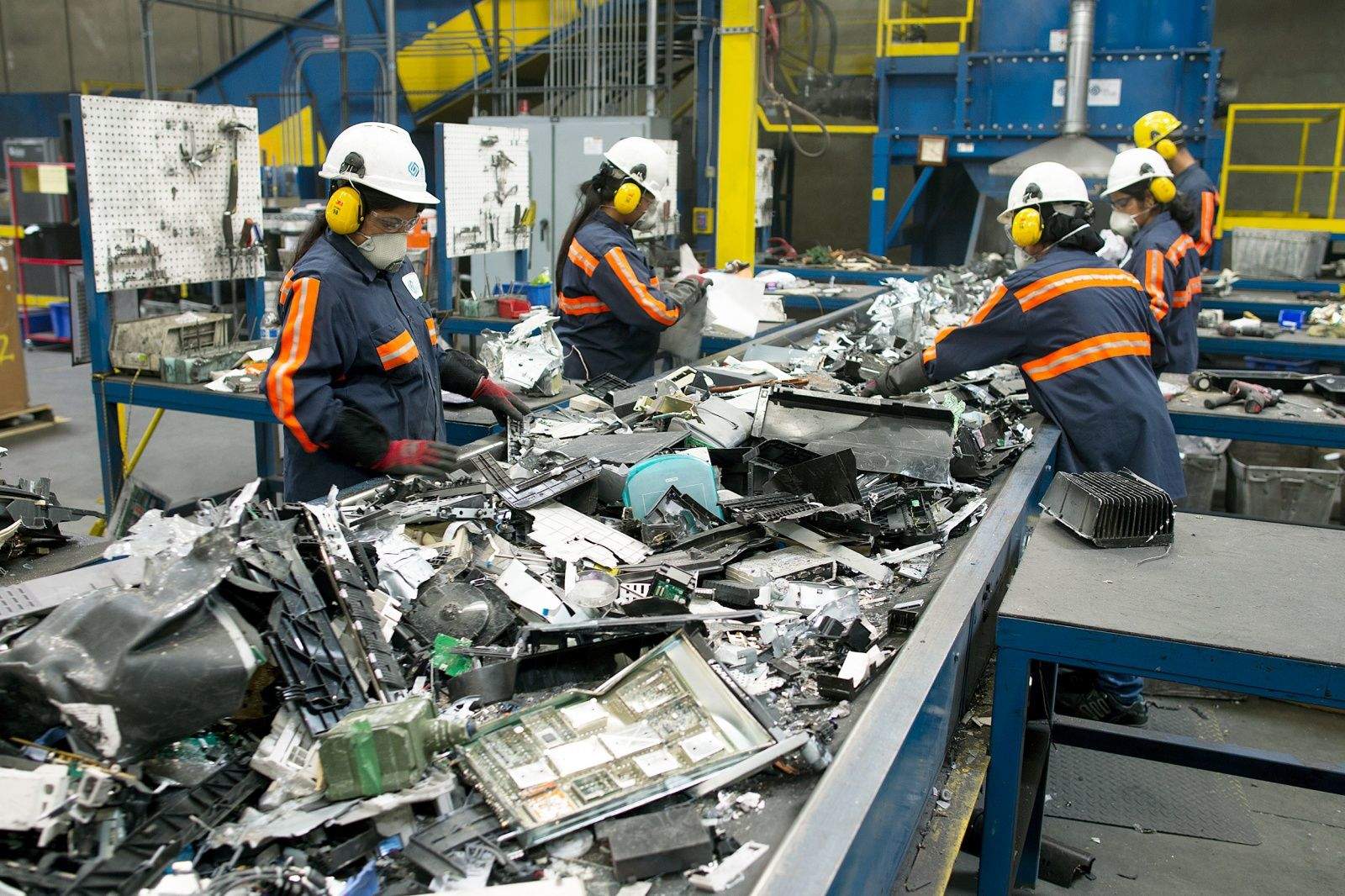 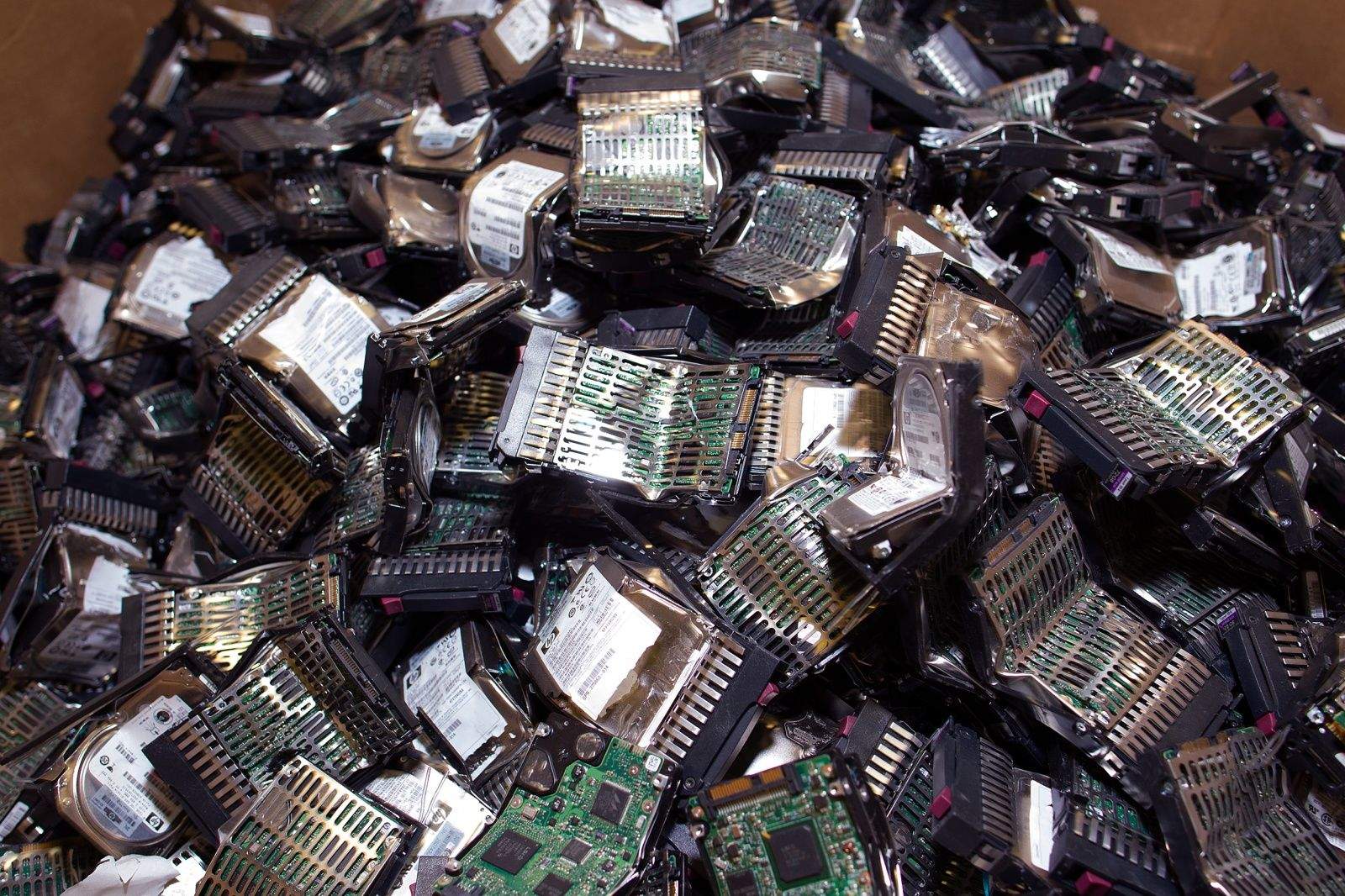 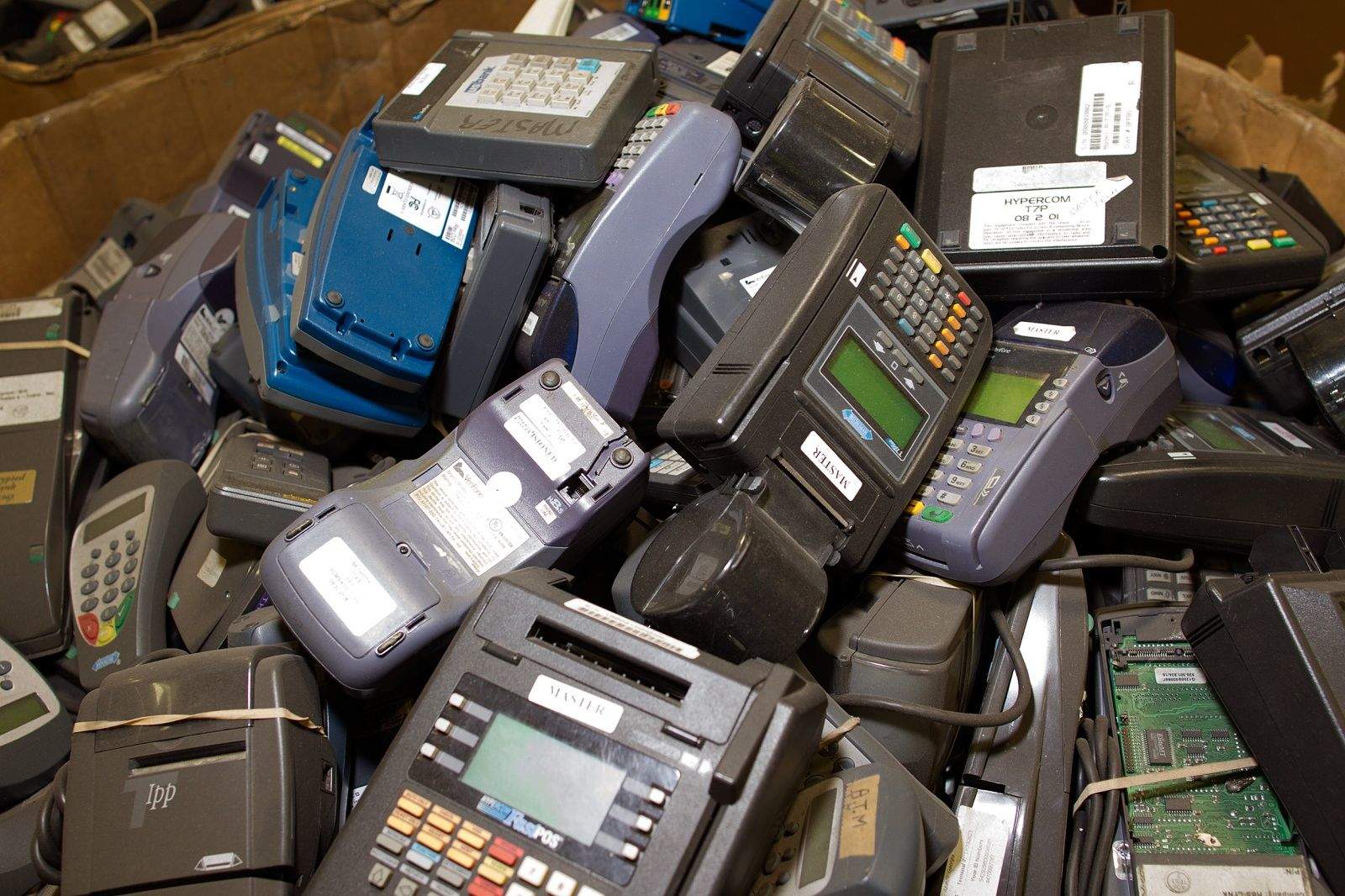 Pickers wear masks to filter particulates out of the air they breathe. Photo: Jim Merithew/Cult of Mac

A box of junked laptops. Photo: Jim Merithew/Cult of Mac

These hard drives will soon be mutilated, the circuit boards stripped from the metal chassis so everything can be properly recycled. Photo: Jim Merithew/Cult of Mac

These hard drives have been pulled aside during the sorting process and set up on a workbench for special attention. Photo: Jim Merithew/Cult of Mac

At a disassembly station toward the beginning of Sims Recycling Solutions' line, an informational card shows various battery types that need to be pulled from old electronics. Photo: Jim Merithew/Cult of Mac

The electronics remnants in this pile have been sent through Sims Recycling Solutions' mega-shredder in Roseville, California. Photo: Jim Merithew/Cult of Mac

A tiny Bluetooth earpiece sits on the bottom of a bin in the lobby of Sims Recycling Solutions' giant facility in Roseville, California. Photo: Jim Merithew/Cult of Mac 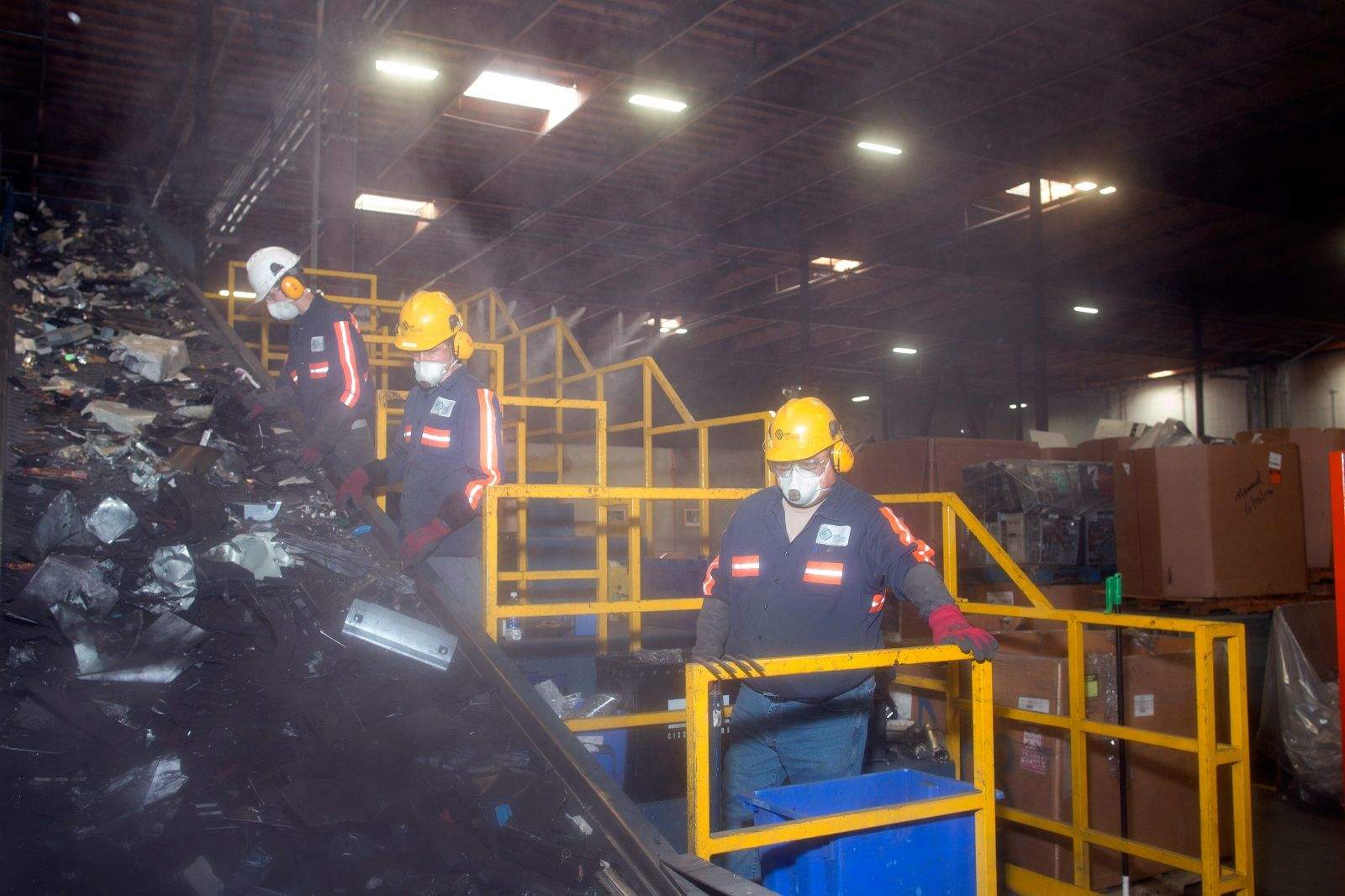 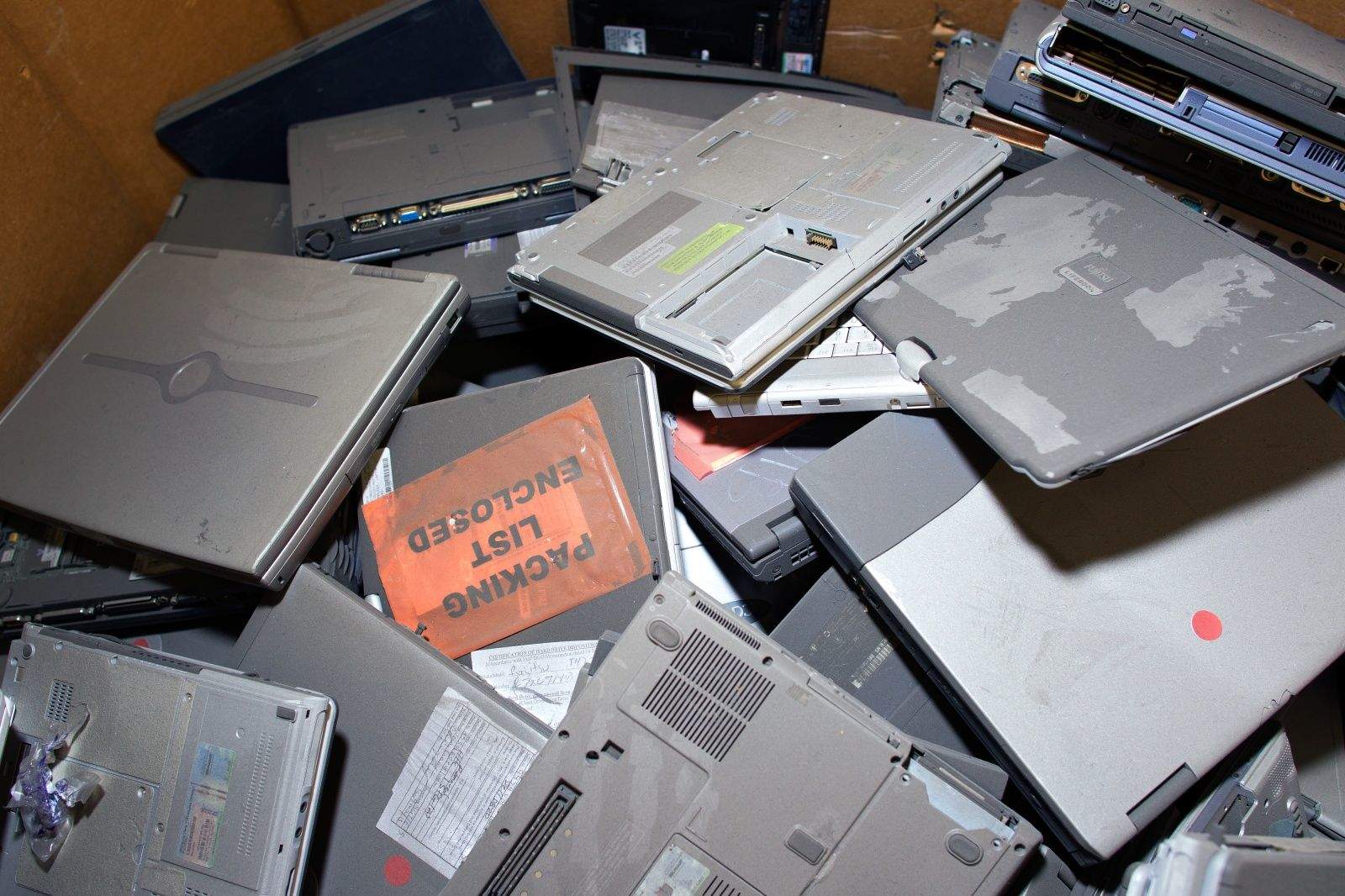 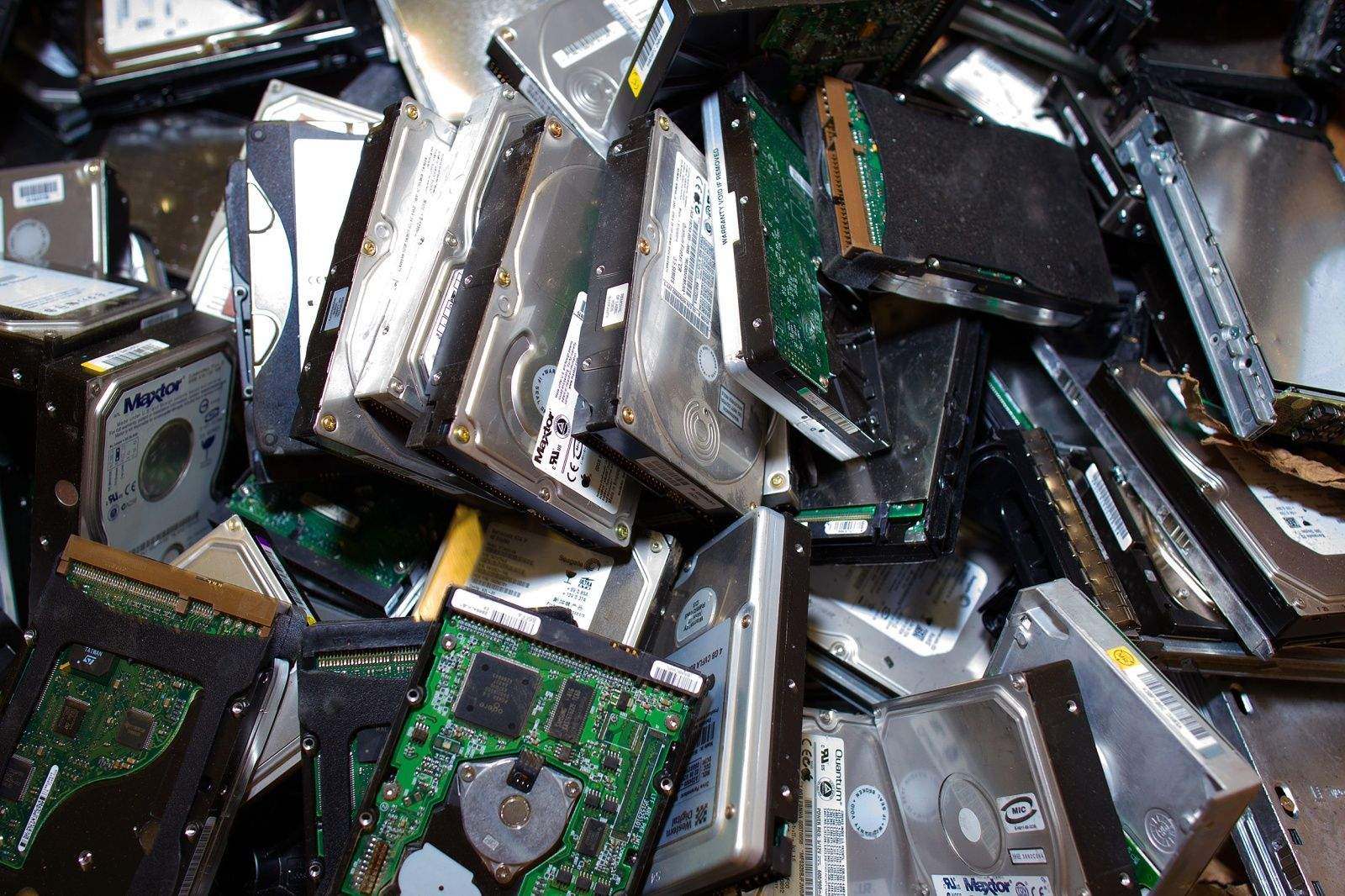 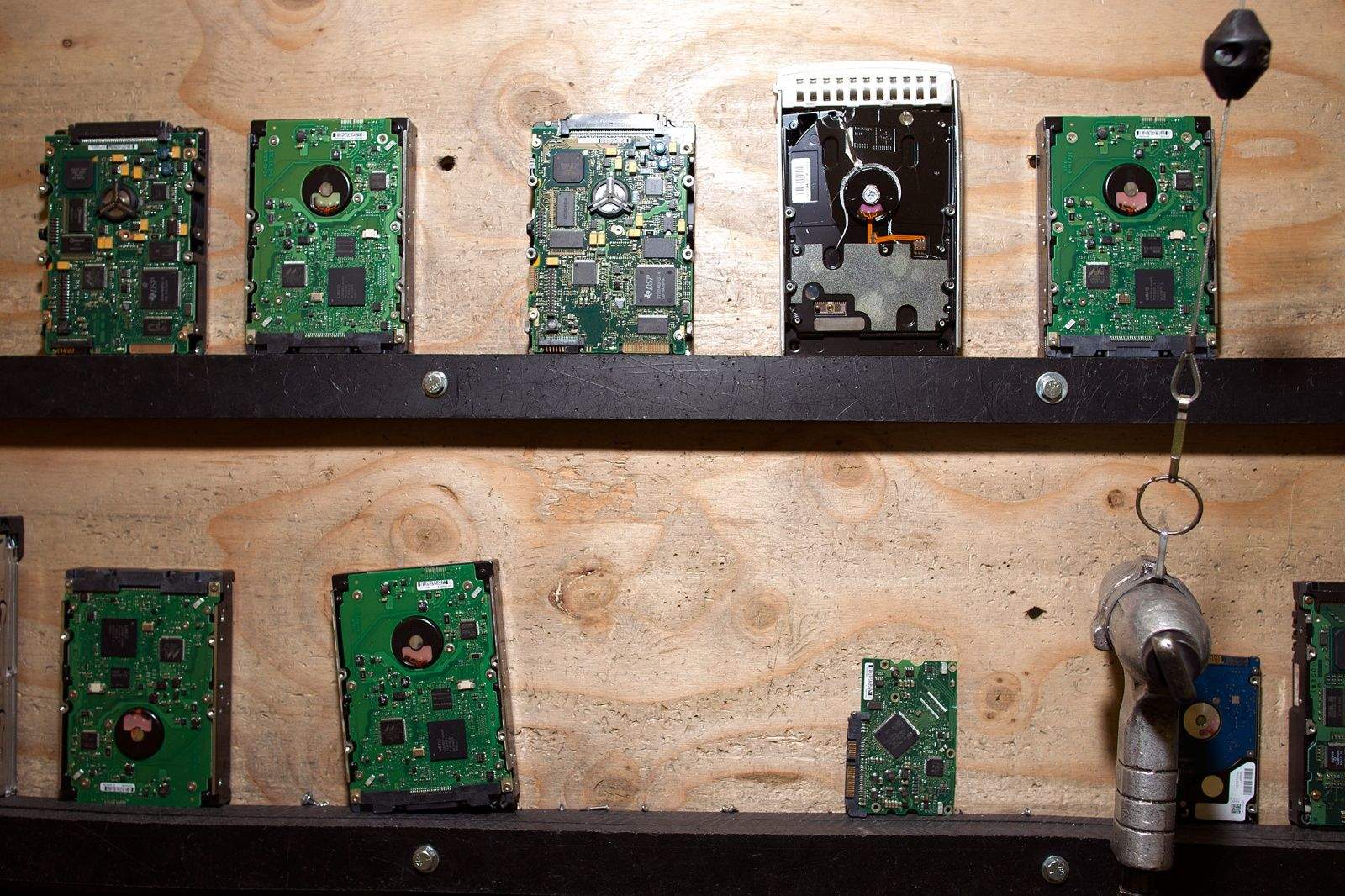 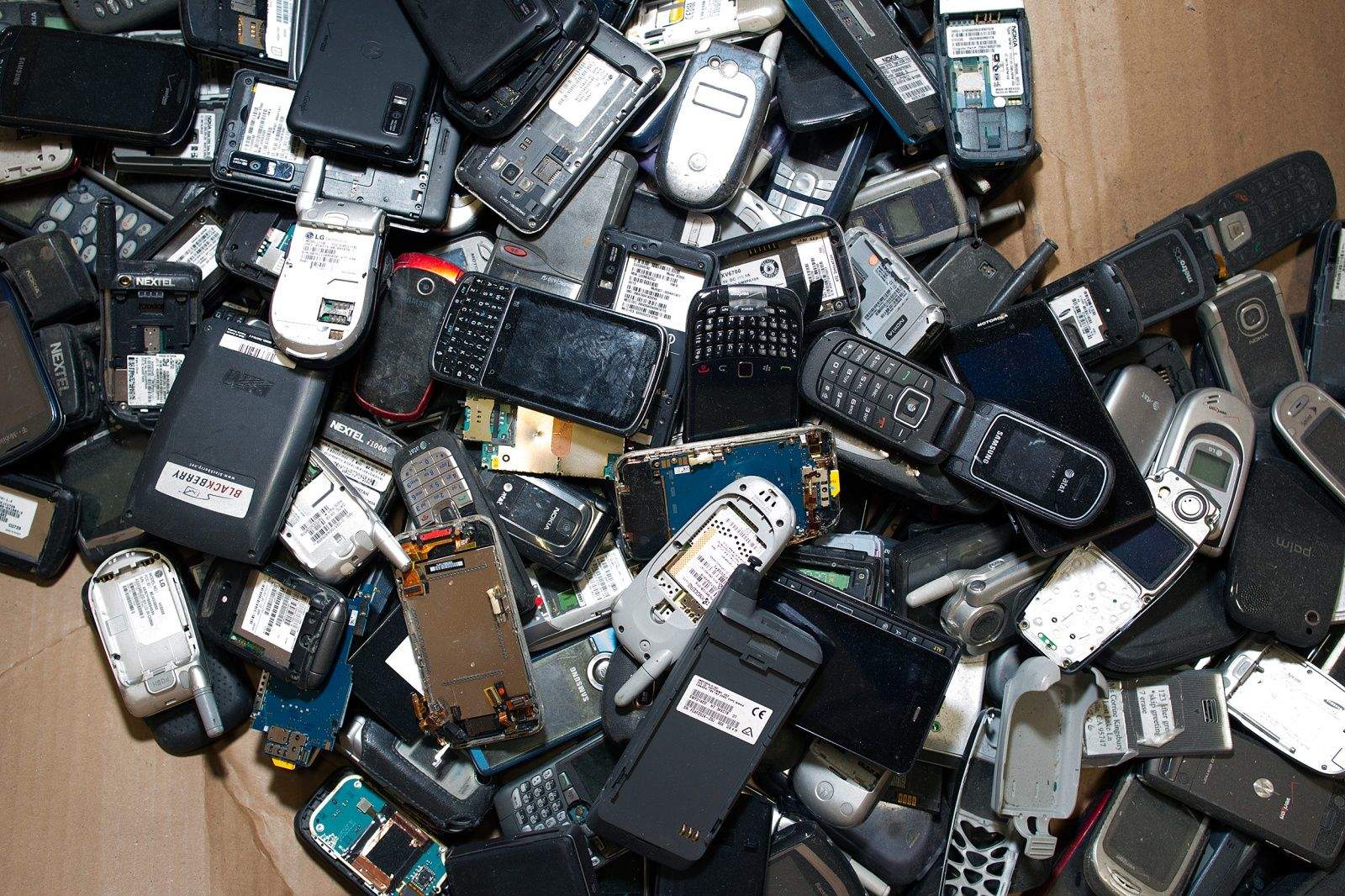 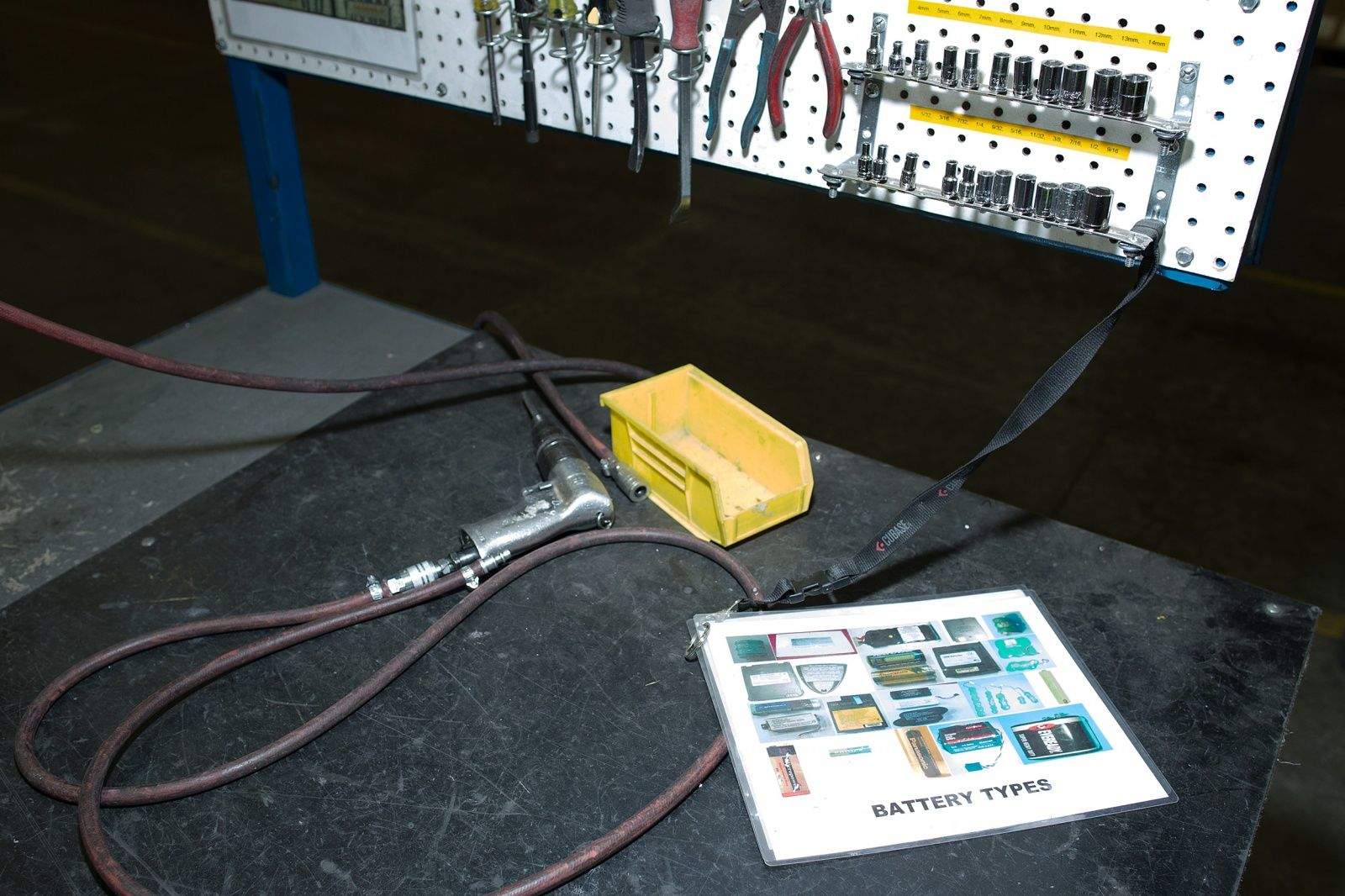 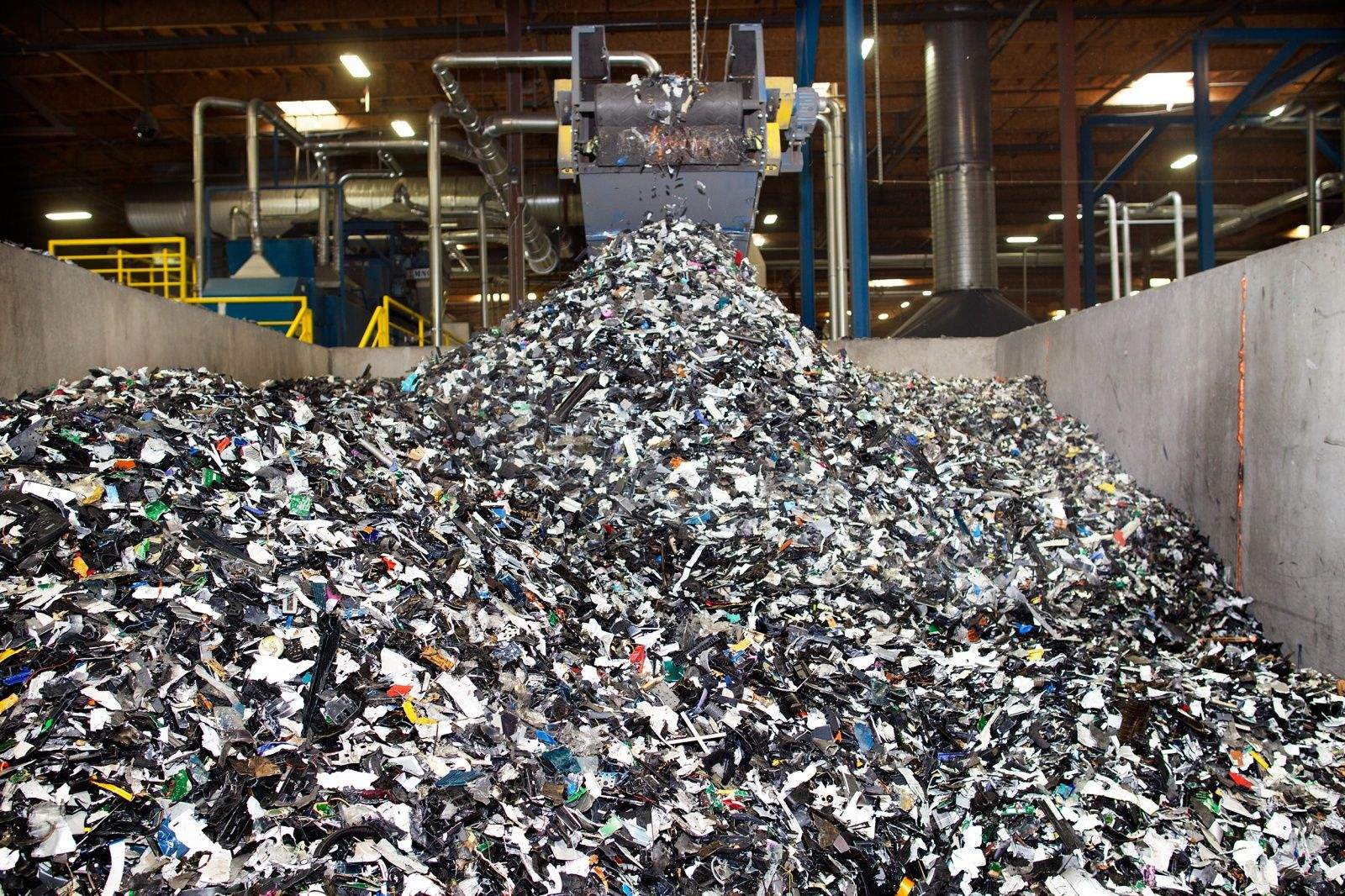 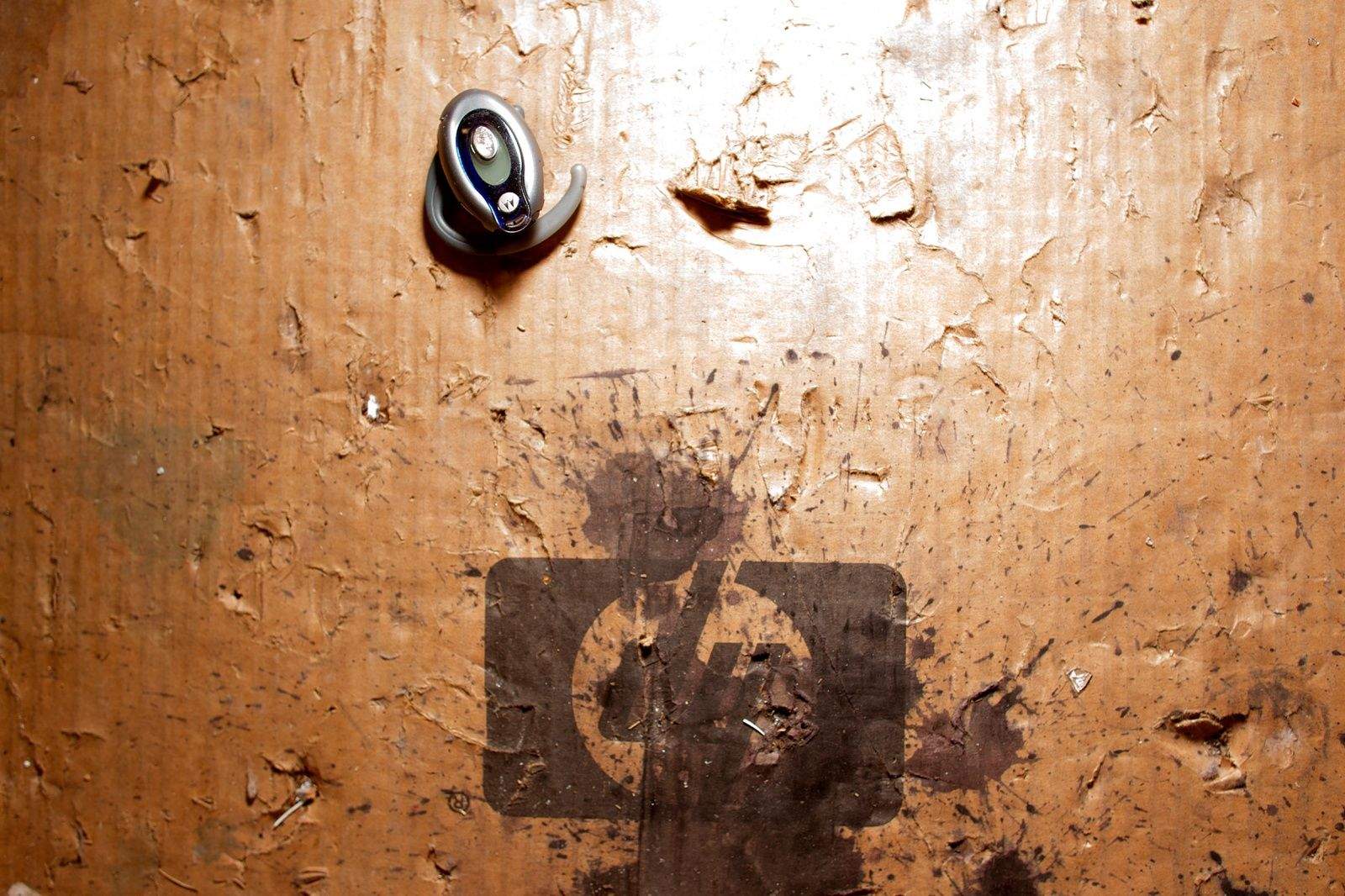 ROSEVILLE, California – This is where your electronics go to die.

In a nondescript, 200,000-square-foot warehouse 20 miles northeast of Sacramento, box after box of discarded electronics and parts sit at Sims Recycling Solutions, awaiting their date with the “mega-shredder” at the end of the line. That’s where four rows of 22 hardened-steel blades will rip and grind the metal housings and circuit boards into tiny chunks.

“We recycle almost everything,” said Bill Vasquez, Sims’ vice president of U.S. operations, during Cult of Mac’s recent tour of the facility. He said more than 99 percent of the materials that pass through Sims’ doors gets recycled. “Our focus is to divert everything from landfill as much as possible.”

Electronic waste, or e-waste, is a growing concern at a time when standing in line to get the latest, greatest iPhone on the day of its release has become a ritual of the tech-obsessed. With prices dropping and technology rapidly advancing, items like smartphones, computers and televisions are increasingly seen as disposable: The United States generates a whopping 3.4 million tons of e-waste per year, with 29 percent of that getting reused or recycled, according to the Environmental Protection Agency.

While the amount of e-waste society produces is increasing, so is the percentage diverted from landfills, thanks to recyclers like Sims.

“The progress has been remarkable,” said Barnes Johnson, director of the EPA’s Office of Resource Conservation and Recovery, in an interview with Cult of Mac. “We have experienced, really, a sea change in the last decade.”

In some ways, the recycling boom echoes California’s Gold Rush and other mining operations. Extracting precious metals is a big part of the recycling equation.

On the e-recycling line

It’s not easy separating the stream of doomed electronics into their component parts, pulling the plastic, paper and wood away from the metal. In fact, it’s a massive undertaking. Sims’ other plants and competing recyclers send some of the more complicated materials to super-shredder sites like Roseville for special handling.

Almost nothing is too large for Sims’ operation.

“I think the biggest thing we ever recycled here was a Jumbotron,” said Vasquez.

The typical e-waste received by Sims is much smaller, and far more ubiquitous, than the Jumbotron’s gigantic video screen, which was shipped to Roseville in pieces. Products destined for Sims’ recycling operation range from common consumer goods like cellphones, small appliances and computer equipment to larger items like network servers and medical hardware.

Inside the Sims complex in Roseville, all the items get carefully sorted. Anything that can be repaired or refurbished gets diverted and might end up for sale on eBay. Other items get disassembled, broken down into component parts that are then boxed or bagged before continuing through the recycling process.

Sims’ Roseville complex is divided roughly in half, with office space next to the brightly lit intake area. In the staging area, box after giant cardboard box of old equipment sits wrapped in plastic on wooden pallets. It’s all incredibly neat and well-organized — like the warehouse scene from Indiana Jones, only filled with refuse rather than relics.

Items move through the Sims system in less than 30 days on average; by law they can’t stay there more than a year. “Every box in here has a tag on it with a date,” said Vasquez.

To tour the disassembly line on the other side of the building, you don a hard hat and slip on a pair of steel-toed rubber booties. As you enter the cavernous room that holds the mega-shredder, the scene changes dramatically. It’s much darker, and the air seems hotter and heavier. It’s not Mines of Moria gloomy, but the atmosphere is markedly different from the office-like intake area.

Up by the giant warehouse’s 32-foot-high ceilings, bursts of atomized water spray from tubes, filling the air with mist.

“It’s way cleaner than the water you drink,” said Vasquez. “It doesn’t even make the floor wet it’s so fine.”

On the warehouse floor, boxes of CDs, wood, copper heat sinks, non-PCB capacitors, transformers, aluminum heat sinks, lead-acid batteries, hard drives and other components of gutted electronics sit in forklift-ready cardboard boxes or Super Sacks (which are themselves reused from the agricultural industry, where they previously held peanuts or other products).

“Every now and then you’ll see one of those giant hard drives from the ’70s.”

“Every now and then you’ll see one of those giant hard drives from the ’70s,” said Vasquez. Circuits boards get pulled off, then the storage devices get crushed and shredded.

Workers known as “pickers” wear blue outfits with orange stripes, yellow or white hard hats, gloves and dust masks that help filter out any particulates. HEPA filters clean the air, but workers on the line still get annual blood tests to check for heavy metals.

They stand on either side of conveyor belts, which take the electronics inexorably toward the shredder. Typically 12 tons per hour go into its gaping maw.

The custom-designed shredder, which Vasquez said cost between $500,000 and $750,000 to build last fall, runs at 600 horsepower. It’s the most powerful of its kind, and yet it’s twice as efficient as the previous machine, reducing Sims’ energy consumption by 30 percent.

Among other things, workers keep a keen eye out for batteries that might have been overlooked earlier in the sorting process. If one of those chemical-filled suckers makes it to the massive machine at the end of the line, a fire could result.

In the war room

Inside a two-story structure built within the warehouse near the shredder, Sims’ operations supervisor Robert Fragoso watches the line. Fragoso, who appeared in Dirty Jobs’ segment on Sims, started out as a picker pulling items off the conveyor belt. Now he’s in his seventh year at Sims and his job is to keep the line moving.

“I’m running it, shredding it, processing it,” Fragoso said from the supervisor’s office, where he watches the line on an array of monitors. “Then getting it in Super Sacks and shipping it out.”

Sometimes the line gets jammed by a big piece of metal and they might have to reverse it two or three times, losing three to 20 minutes in the process.

“I make sure it doesn’t reverse,” Fragoso said. “The less jams we have, the more successful we are.”

On one screen, video shows an eddy current separator, which uses magnets and a spinning drum to separate out non-ferrous metals like aluminum, copper and gold. When a detector finds a bit of non-ferrous metal, one of 300 jets will shoot a puff of air that sends the material flying through the air. As we watch, bits of aluminum pop off the conveyor belt into a separate chute.

Sims employs 225 people in Roseville, about 70 per shift, and the team can handle approximately 5,000,000 pounds a month. The company runs 13 plants with 1,800 workers in the United States, including two other mega-shredder sites like the one in Roseville, and a couple dozen around the world. Its Australian parent company, Sims Metal Management, operates more than 200 facilities. As noted on a Guinness World Records certificate in Sims’ lobby, the company set a record on April 21, 2012, for “most consumer electronics recycled in 24 hours at multiple venues.” (The record, reached at five Sims locations in the United States, was 36,455.22 kilograms.)

“We’re the biggest in the world,” Vasquez said.

An army of recyclers

“It’s becoming more challenging,” Vasquez says. “Devices are becoming smaller, and the batteries are becoming a bigger portion of it, so it changes the dynamics and the handling.” Smaller items are more difficult to pick apart, and Sims is constantly looking for ways to optimize and streamline its operations.

How does discarded gear end up in front of the army of recyclers at Sims’ Roseville plant or one of its other operations around the world? Items are gathered by municipalities, rounded up at recycling events or simply dropped off by individuals — with big bumps around Earth Day and spring-cleaning time, according to Vasquez. Some loads might come from flood-damaged electronics or recalls.

While smartphones make up an increasing percentage of the e-waste stream, tons of old-fashioned cathode ray tubes surface during collection events.

“The dynamics change as things get smaller,” Vasquez said. “A 50-pound TV is very different than a 12-pound flat panel, and the state of California treats them both the same,” aside from doing more data collection for the flat panel. For CRTs, recyclers must record the owner’s name and address; for flat panels, Sims must capture the owner’s name and address, plus the object’s serial number. Vasquez likened it to being writing down the names of people who drank out of individual Pepsi cans.

California charges an electronic waste recycling fee of $3 to $5 for devices with screens that measure 4 inches or more diagonally. Vasquez said there’s been some griping about low claims from recyclers as the world move from heavy CRTs to much-lighter flat panels. He chalked it up to a system that pays less for more work, since the state pays 39 cents per pound for both kinds of monitors and the flat panel reporting is more cumbersome.

“The effort it takes to collect a serial number and link it to a person’s name from out in the field in through the whole process — it costs you more to track it than the state’s going to give you for it,” he said.

Regulation drives a lot of the recycling, but every state does it differently — some states, like Nevada, have absolutely no regulation whatsoever. Luckily, many businesses are taking a more pro-active approach to e-recycling and trying to raise awareness.

Perhaps not surprisingly, Vasquez said Apple is leading the way with its recycling program and other environmental efforts.

“They’re very good stewards,” said Vasquez, who got his start in the business working at Apple as a temp worker assembling Macintosh Performas a couple decades ago. “I think they go above and beyond…. It’s part of their charter. They don’t do it for the notoriety — I think they do it for the general good.”