For any Apple coder, attending the annual Worldwide Developers Conference is a coveted opportunity. But for the young recipients of WWDC 2014 Student Scholarships, a free ticket to the event means more than an adventure in geekery; it’s the crowning achievement of their blossoming careers.

Take Shaan Singh, a 14-year-old developer and designer whose iPhone finance app Budgetize helped him bag a scholarship to WWDC, a prize that’s something like winning a golden ticket to Willy Wonka’s chocolate factory.

“It’s a big honor for me to be selected because I made an app that I feel was creative and smart, and Apple thinks so too,” he told Cult of Mac. “I’ve always admired Apple’s design, and I’m excited that they like mine too.”

For most of the thousands of App Store developers who are lucky enough to attend WWDC each year, it’s the only time they’ll ever get hands-on coaching from Apple engineers on the company’s latest software. It’s a prime learning experience and a great chance to network with other developers.

Despite the high price ($1,599), tickets to the conference are in such high demand that Apple awarded them at random this year using a lottery system. Many devs who can’t land a ticket come to San Francisco anyway to attend indie spinoff AltConf and hit the parties that inevitably accompany WWDC.

WWDC kicks off Monday with Apple’s keynote address. Almost assuredly, iOS 8 and a redesigned version of OS X will be unveiled and put in the hands of developers to beta test with their apps.

For first-time WWDC scholarship winner Indragie Karunaratne, attending the event is a chance to see what Apple has in store for the future of its mobile and desktop platforms. “I’m particularly interested in OS X because we might see a big refresh this year,” said 19-year-old Karunaratne, who studies software engineering at the University of Alberta in Canada.

Karunaratne has made several Mac apps, but it was his instant messaging client Flamingo, which lets you chat using Facebook, Google Hangouts and other messaging services all in one place, that helped him win one of Apple’s 200 scholarships this year. 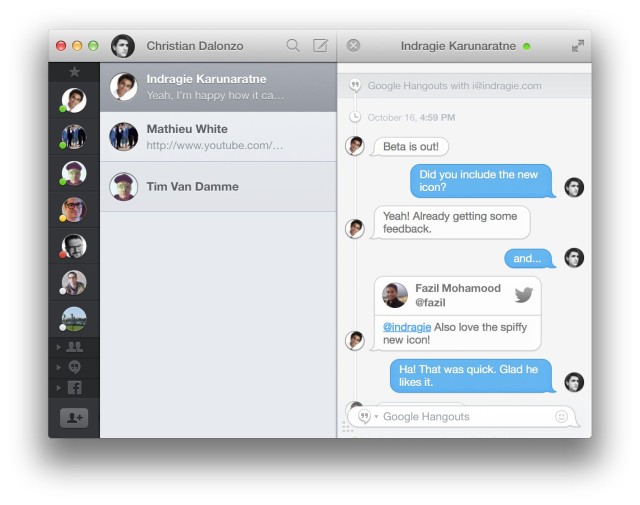 “It feels incredible to be officially recognized by Apple for the first time.”

“After building software for Apple platforms for over five years, it feels incredible to be officially recognized by Apple for the first time,” said Karunaratne. “I’m happy beyond words that Apple finds my work worthy of their recognition and that they appreciate the time and dedication I’ve put into it.”

Conrad Kramer, another winner, interned with Airbnb last summer and helped the popular startup redesign its iPhone app for iOS 7. One of the 17-year-old Kramer’s Mac apps, called DeskConnect, was featured by Apple in the Mac App Store and has 150,000 users. Thanks to the scholarship, this will be his first year at WWDC.

“My fanboy side is looking forward to hopefully hearing about a new product category, but I am mainly going to see what’s new with Apple’s SDKs and to meet developers I wouldn’t normally get to see,” said Kramer, who plans to study at MIT this fall.

Scholarship winner Adam Bell has seen success not only making apps for Apple’s App Store, but with hacking together jailbreak tweaks. One of his more popular tweaks unlocks the iOS lockscreen by drawing instead of entering a passcode. The Canadian college student was recently hired to make a companion app for Lady Gaga’s latest album.

While his apps have garnered accolades from customers and news sites, getting reviewed by Apple “is on a completely different level,” he said in an email to Cult of Mac. “This is the first time Apple has officially given me the stamp of approval on something I built entirely on my own. That’s what feels fantastic.”