You may not need a mouse much these days if you’re rocking a Macbook or Magic Trackpad, but if you do any kind of gaming on your computer, you know a mouse is essential kit.

Pro gamers rely on lag-free, incredibly high-tech controllers and gaming mice, and Steel Series is one of the top contenders in the field. Their series of gaming mice and keyboards are precision engineered to provide whip-fast response to any twitchy input a gamer needs in their chosen gaming environment.

The Steel Series Sensei wireless gaming mouse is an ergonomic marvel with ten buttons, its own software control app and some scary-quick response times.

Despite all that high-tech nonsense, it’s super easy to use and feels good in the hand. Which is important when I’m jacked into an all-night MMO session with 12 of my besties, raiding the lair of whatever monster it is that we’re all trying to kill.

I love this damn mouse more than I can say.

Mouse sensitivity is measured in counts per inch, or CPI, which is analogous to dots per inch in printing. The higher the CPI, the more times it will check its position, leaving you with a more sensitive mouse cursor. In the world of competitive gaming, it’s like a hot rod that’s been highly tuned to provide the highest level of performance possible, making the contest more about the skill of the drivers than any quality disparity between the cars. The Sensei has a whopping 8200 CPI, which can outright be doubled with the software.

What’s really brilliant about the Sensei Wireless is that it, well, has no wires. It’s not a Bluetooth peripheral, however, as that technology is ill-suited to a high CPI and lightning-quick response times. When you’re hauling ass through a star field full of asteroids and angry baddies shooting at you, you don’t want to rely on a Best Buy Bluetooth special. You want a mouse like the Sensei.

The Steel Series folks achieve this nirvana of responsiveness via the Sensei dock, a weighted rectangle of plastic that plugs directly into your Mac’s USB port. The hyper-fast wireless connection between the mouse and dock is what makes it all work, though you can take the cable out of the dock and plug it right into the mouse, making the Sensei a fully workable wired mouse too, in case you don’t want to lug the dock around with you to the local LAN party.

The mouse nestles right into top of the dock, though, which then doubles as a charging station. When the neon-green light that rims the little mouse bed turns yellow, you know it’s time to start the recharge cycle. When it’s red, it’s time to stop gaming and charge those batteries.

The Sensei mouse has an advertised 16 hours of battery life in it (up to 20 if you tweak its power-saver settings in the controller app), which gives you about as much gaming in one go as you really should be doing, young lady. 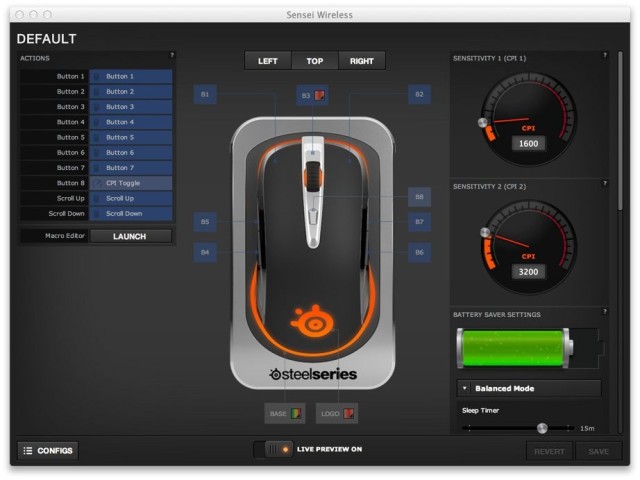 As you can see, there’s some crazy-level customization available here. You can change the color of that Steel Series logo on the heel of the mouse to any of the over 16 million possible combinations allowed. You can have it pulse or keep a steady glow. It is up to you.

You can tweak three settings for sensitivity, focus, aim, and acceleration of the cursor with this thing and really, who has time for all that? Pro gamers, that’s who. They’re a breed apart.

Program the buttons for whatever you want, too. I play MMOs like World of Warcraft and Elder Scrolls, so have the four side buttons set to unleash my mage spells on unsuspecting creeps in each game. The way the mouse is designed makes it super easy for lefties or righties to individualize their own way of gaming in this insane mouse app. I mean, come on, look at that thing.

My gaming buddy, who is a crazy man with a liquid-cooled super computer that he games on exclusively (“I think we have different definitions of what it means to have a game run well, Rob.”), loves the high-end precision of this mouse, and will not stop bugging me to use it.

As for myself, I’m perfectly happy to tease him for not having one, as this is hands-down the best mouse I’ve ever used, for gaming or otherwise. It’s weighted just right and big enough for my bear paws to comfortably use it without ever cramping up.

If you’ve got a spare $159.99 and you crave a precision mouse that you can make pulse a deep chartreuse, the Steel Series Sensei wireless mouse is your game. Go get it, right now.