The tale of Flappy Bird is almost unbelievable. A frustratingly simple iPhone game from an indie game dev in Vietnam with no prior notoriety becomes an overnight success. It dominates the App Store charts and starts making $50,000 per day in ad revenue. Then, out of the blue, the dev decides to pull it from the App Store at the height of its popularity.

It was a story too good to be true. Except that it was true.

In the wake of Flappy Birds’s removal, countless knockoffs have tried to fill the gap. “Flappy Bird being taken off the App Store has created this vacuum,” says Jeremy Olson, founder of the award-winning app studio Tapity. In an effort to make a worthy successor to Flappy Bird, Olson and his small team have created Buffalo Wings.

Instead of a bird, you guide a flying buffalo over and under walls by tapping the iPhone’s screen. Hit a wall at any point and you have to start over. The gameplay mechanics may be the same, but Tapity is hoping that Buffalo Wings has what it takes to capture lightning in a bottle twice.

Tapity’s pedigree in making apps makes its decision to enter the same corner as other Flappy Bird clones quite unusual. Its flagship app, Grades, won an Apple Design Award in 2011. We’ve called Languages the “best translation app money can buy.” Something like Buffalo Wings is quite the departure for the small, respected app maker.

Addictive and at the same time frustrating

Like many others, Jeremy Olson was intrigued by Flappy Bird’s popularity. It seemed to be all anyone talked about online. Why did it captivate people? He downloaded it a couple of days before it was pulled to find out.

He saw that it was addictive and at the same time frustrating. The combination of those two elements created this “secret sauce” he attributes as the reason for its success.

When Flappy Bird was pulled, Olson saw an opportunity to fill the void by paying tribute to the original while also adding new ideas. And within a week, Buffalo Wings was born.

Why a buffalo? Olson’s reasoning was simple. He had been really enjoying buffalo wings and bison burgers at the time. “I was thinking about buffalo a lot. Wouldn’t it be ironic and funny if there was a flying buffalo?” Indeed.

To make the game, Olson turned to his family members, including his father who helps run Tapity. Olson coded, while his dad did all the sounds. His little brother helped build the app’s physics engine, and throughout the process Olson taught him Objective-C. His teenage sister put together the buffalo facts that appear whenever you get a new high score. The third member of Tapity, Christain Billings, made most of the graphics.

More than anything, Olson wants to honor the mold that Flappy Bird created. While most of the clones feel like cheap knockoffs trying to ride Flappy Bird’s coattails, Buffalo Wings has its own distinct personality.

“We’ve come to appreciate the original so much more since going through this process,” says Olson. “We noticed all the little details in his game that all the clones just missed.”

Buffalo Wings has plenty of its own little details. Most elements, including the background, are not pixelated, while the main character has a retro, 8-bit look. A night mode is enabled based on the time of day. Funny buffalo facts appear every once in awhile. “We wanted to give some kind of redeeming element for playing the game,” explains Olson.

There needs to be some kind of redeeming element, because the gameplay is just as hard as Flappy Bird. I haven’t gotten past four points. “That’s by design,” Olson admits.

Ads are done more subtly and tastefully than other clones

Since Buffalo Wings is a free download, Olson is hoping to make some money off advertising. Ads are done more subtly and tastefully than other clones. Small banners are only displayed on the high score screen. Flappy Bird would show an ad every time you failed, which for most was very often.

In terms of additional monetization, you don’t have to look past the game’s name to get ideas. “There could be some sponsorships in the future,” says Olson. Let your imagination run wild there.

The first version of Buffalo Wings is relatively basic, but Olson has plans to mature the game. An iPad version is planned for a future update.

Flappy Bird creator Dong Nguyen said he removed the game because he thought it was “too addictive.” The unexpected level of fame the game’s success brought caused him to loose sleep. He was getting bombarded with media requests, and he finally tweeted “I can’t take this anymore” before pulling it from the store.

It’s unclear how Nguyen, who did not respond to a request for comment on this story, feels about clones of his game. It could be argued that he stole from Nintendo for the design of Flappy Bird itself, but Olson doesn’t see it that way. He also hopes Nguyen sees Buffalo Wings as a tribute to Flappy Bird, not a knockoff. 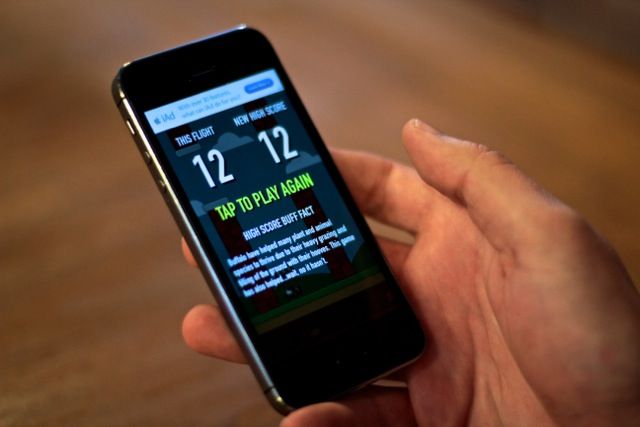 “We would have never done this if he didn’t take the app off the store,” says Olson. “I hate clones. But if I were to take Grades off the store today, I would hope that someone makes a high quality clone of it soon. I would have no problem with that. It would actually be nice.”

“We think Dong Nguyen made a genius game”

Nguyen received death threats for taking Flappy Bird off the store, so “hopefully a really good replacement can make it not so hard on him,” adds Olson. Apple made Tapity remove all direct references to Flappy Bird from the Buffalo Wings description before it was approved in the App Store. The top free app on the charts is currently called Flappy Wings.

There are obvious monetary gains to be made if Buffalo Wings is able to tap into the popularity Flappy Bird enjoyed. Money earned through the game’s ads will help fund other projects. Tapity has ambitious plans for Really Reading, an app it hopes will revolutionize how reading is taught and help solve America’s huge illiteracy problem among students.

Other apps include Hours, a time tracking tool that is currently in private beta. Olson plans on shipping it next month. After that, his team wants to revisit the iOS 7 redesign of Grades that has been in development for months.

“As an Apple Design Award winning company, I guess building a clone may have put our reputation on the line a bit, but I thought it was a fun family experiment and we have learned a lot from it already,” says Olson. “We think Dong Nguyen made a genius game and we hope our replacement is a credit to his work.”